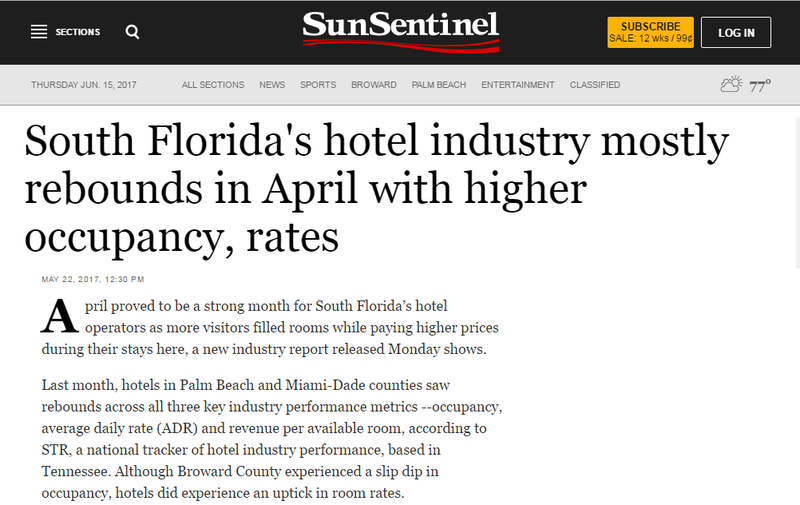 Last month, hotels in Palm Beach and Miami-Dade counties saw rebounds across all three key industry performance metrics --occupancy, average daily rate (ADR) and revenue per available room, according to STR, a national tracker of hotel industry performance, based in Tennessee. Although Broward County experienced a slip dip in occupancy, hotels did experience an uptick in room rates.

“A later-than-normal Easter that coincided with Passover were major factors for The Palm Beaches’ strong hotel performance in April,” said Jorge Pesquera, president and CEO for Discover The Palm Beaches, the county’s official tourism marketer.

Overall the county is off to solid start this year with a record 2.3 million tourists arriving in the first quarter, up 7 percent from the same period in 2016, Discover The Palm Beaches, the county’s tourism marketer announced recently.

First-quarter 2017 tourism visitation data for Broward and Miami-Dade counties has not been released by their respective tourism agencies.

“Our ADR was up for the first time in six months, which is very good news for us,” said Stacy Ritter, president and CEO of the Greater Fort Lauderdale Convention & Visitors Bureau in a report Friday on the county’s tourism sector.

Throughout 2017 so far, South Florida’s hotel sector has seen volatility in occupancy, rates and RevPar due in part to ripple effects caused by additional new room inventory, a strong U.S. dollar and federal travel policies that have softened travel demand from certain international markets.