Kushners hunting hard for a loan to pay back Chinese investors 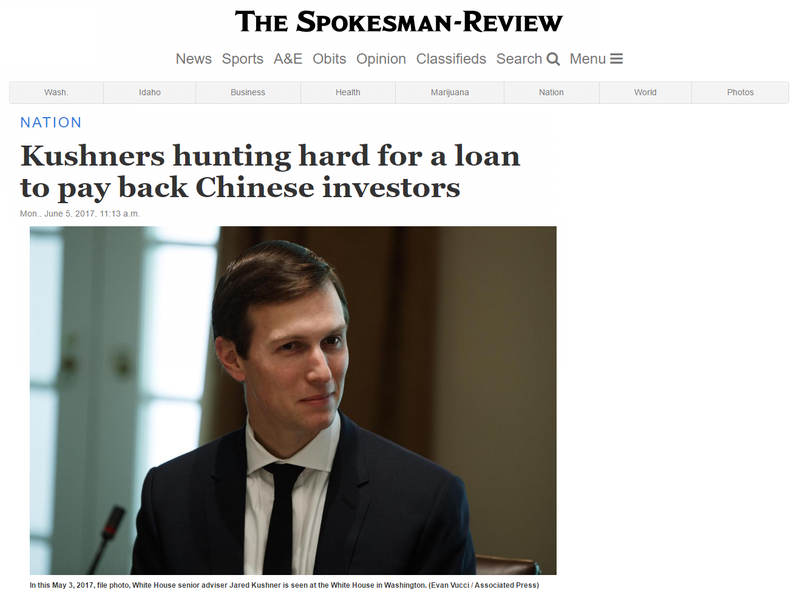 The Kushner family real estate company is seeking a $250 million loan to pay back Chinese investors in a New Jersey luxury tower but finding some major U.S. banks wary of the controversies around its White House links and the visa program used to attract the investors.

Kushner Cos. is sending out feelers for the loan against its 50-story Trump Bay Street in Jersey City. It would keep $50 million and use the rest to repay the investors and pay off a mortgage on the building, according to a person familiar with the negotiations who asked not to be identified because the talks are private.

The company, which belongs to the family of Jared Kushner, President Donald Trump’s son-in-law and senior adviser, funded about a quarter of the $194-million development through the EB-5 visa program that grants wealthy foreigners green cards in exchange for investing in U.S. projects.

Some large U.S. banks are shying away from the transaction because of the property’s connection to Kushner and the visa program, the person said. Unregulated lenders and non-U.S. banks will probably step into the breach. A Kushner Cos. spokesman declined to comment.

The EB-5 program requires a foreigner to invest at least $500,000 in a project that helps an area with high unemployment or in need of development in exchange for a permanent resident visa. Lawmakers in Washington have been pushing for EB-5 changes for several years, calling for stricter oversight to guard against fraud and provide better access to economically strapped regions. Sen. Chuck Grassley, an Iowa Republican, has introduced bipartisan legislation to end the program. Last month, Trump renewed the program through September.

The Kushners’ reliance on EB-5 has come under criticism. Last week, three Democratic congressmen sent a letter to Kushner Cos. asking for information about how it has used EB-5. The letter raised concerns that the company’s participation in the program, including recent investor pitches in China, could pose conflicts for Jared Kushner’s policy-making role in the White House. Last month, Kushner Cos. was forced to pull out of an EB-5 presentation following criticism that Kushner’s sister invoked the company’s links to Trump as a selling point for investors in their deals.

The U.S. lender skepticism follows a rough period of deal making for Kushner Cos. Over the past five months, the real estate company has seen talks for three major projects quashed, including negotiations with China’s Anbang Insurance Group Co. to refinance the family’s marquee Manhattan office tower.

The spotlight grew brighter last week after reports that Jared Kushner was under scrutiny in an FBI investigation into possible links between Russia and Trump’s campaign during the 2016 presidential election.

Kushner, the husband of Ivanka Trump, has divested ownership in many projects to close relatives and has vowed to avoid policy discussions on renewing the controversial visa program.