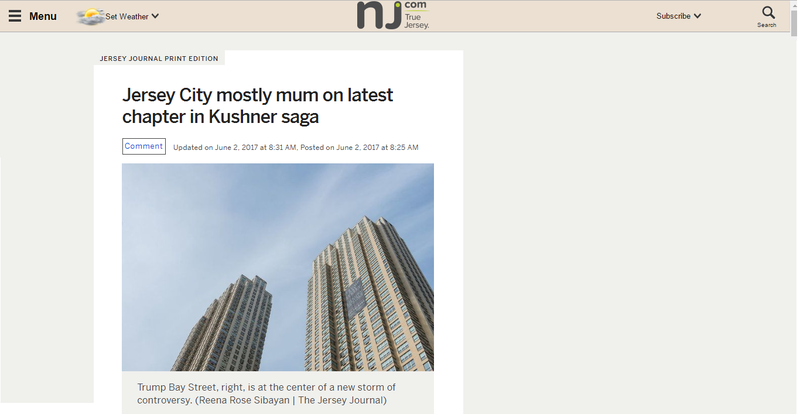 City Hall was mostly silent yesterday about the news that high unemployment in the city's south side was used to help Jared Kushner and the developers of Trump Bay Street win critical financing for the luxury high-rise.

City spokeswoman Jennifer Morrill said the city was not involved in the bit of so-called "gerrymandering" that allowed Kushner to cite the jobless rate in the city's impoverished areas to obtain federal approval for the 50-story tower.

"This is the first I've heard," Lavarro said. "I would have to do a little independent research on that."

Lavarro is also chair of the Jersey City Redevelopment Agency, which in April 2013 designated an LLC controlled in part by Kushner as the developer of Trump Bay Street, located at 65 Bay St.

The tower was built in part with $50 million in financing through the federal EB-5 visa program, which allows foreign investors to obtain green cards if they put $500,000 into projects in areas with high unemployment.

Morrill did not respond when asked whether the city has records on how many local residents received jobs working on Trump Bay Street.

Michael Gibson, a Florida-based EB-5 adviser with USAdvisors.org, which specializes in risk analysis on EB-5 investments, said the "gerrymandering" used in Trump Bay Street's case is legal but contrary to how Congress intended the EB-5 program.

"Critics of this program say it's being misused because these multi-million dollar developers are accessing this program and depriving other areas, needed areas from getting it," Gibson said.