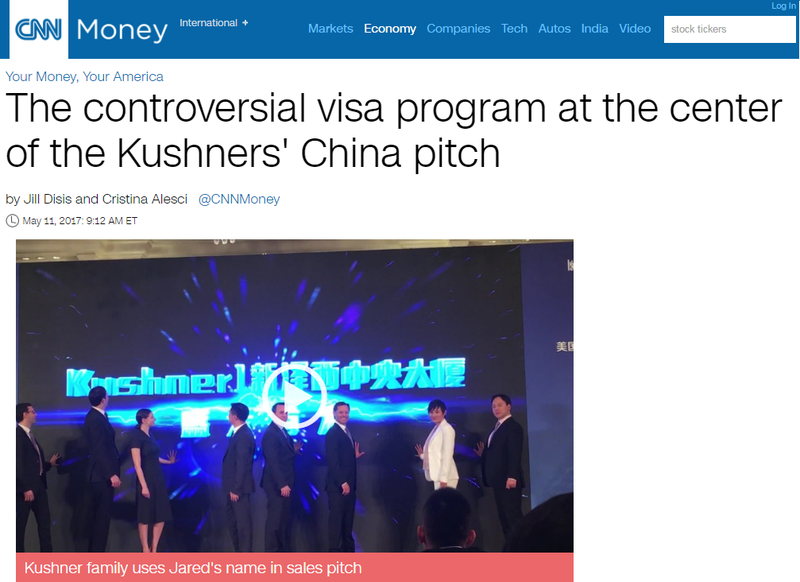 Ethics watchdogs saw a conflict of interest. The speaker was Nicole Kushner Meyer, sister of Jared Kushner, President Trump's son-in-law and a top White House adviser. She appeared to be leveraging family ties to the White House to enrich the family business.

The pitch, at an investment conference in Beijing last weekend, also cast a spotlight on a murky visa program that has become a target for reform.

It's called the EB-5 visa. It grants immigrants a path to a green card if they invest more than $500,000 in a project that creates jobs in the United States.

The EB-5 has been around more than 20 years. But it became more popular during the Great Recession, particularly in real estate, because developers whose traditional funding had dried up could turn to EB-5 to finance projects.

Critics see a host of problems: Too much of the money goes to wealthy urban areas. Companies aren't required to disclose much about how they spend the money, which leads to abuse and fraud. Some lawmakers say the program effectively sells citizenship to wealthy immigrants.

"They get cheap money for their projects and the public has no clue whether it's generating economic benefits for America," said Michael Gibson, the managing director of an organization that conducts risk analysis and due diligence on EB-5 projects for foreign investors.

To qualify for a green card, the program requires an investor to pump at least $1 million into a project that creates 10 or more jobs. The threshold drops to $500,000 if the development is in a rural area or an urban area with high unemployment.

But overseas investors tend to look for safe projects, familiar companies and big cities, said Gary Friedland, a scholar in residence at New York University's Stern School of Business who has studied the program.

"There was originally intended to be a distinction between these underserved areas and other areas," he said. "In practice, the distinction has become meaningless." 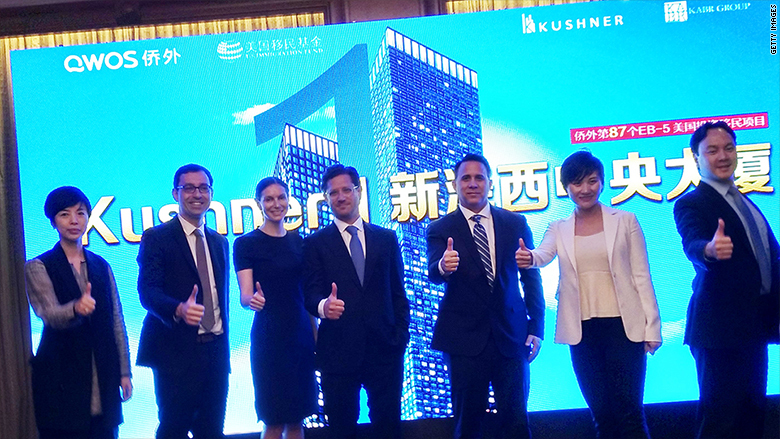 The decision by Kushner Companies to market their project in China had obvious advantages. For Chinese citizens, who account for most EB-5 visas, the EB-5 program could mean better opportunities for their children, plus a low-risk investment.

In Beijing, Kushner Companies was touting a $976 million residential and commercial project in New Jersey called 1 Journal Square. Kushner Companies had planned to use state and city development money to finance the project, but that fell through because it depended on an anchor tenant that backed out. (Jared Kushner says he is not involved in the operation of Kushner Companies and has divested his interests in the Journal Square project.)

Jared Kushner ran the company at the time and still has a stake in Trump Bay Street. His lawyer Blake Roberts told CNNMoney that Trump Bay has stopped soliciting EB-5 funding, and added that Kushner will recuse himself from "particular matters" involving the program.

Kushner Companies didn't immediately answer a question from CNNMoney about how many jobs were created by the Trump Bay Street project.

The EB-5 program also isn't very transparent. The government doesn't monitor how money is used until the investor is close to getting a green card, said Friedland, the NYU scholar.

Friedland suggested that reforming the EB-5 program could include a requirement that developers give regular updates to investors, and having a third-party administrator monitor how EB-5 money is used.

Senator Dianne Feinstein, a California Democrat, said this week the Kushners' marketing campaign is the best example of how the EB-5 program has been distorted.

She said EB-5 is "frequently exploited by real estate developers to finance projects in the wealthiest parts of this country. This is a far cry from the program's original intent to spur economic development in depressed communities."

Daniel Healy, who runs a firm in Dallas that manages EB-5 investments, noted that the program still carries risk, and visas aren't guaranteed."Every EB-5 investor is required to create at least 10 jobs for American workers," he said. "No other country in the world sets such a high bar for job creation, and investors don't always clear it."

Reform could come this year. The White House said this week that it wants to ensure the money is "used as intended and that investment is being spread to all areas of the country."

The Department of Homeland Security has proposed raising the threshold for investment and giving the federal government more control over where the investments can be used. That could steer more investment to economically troubled areas, Friedman said.

Congress could also make changes, but hasn't. Lawmakers renewed EB-5 funding this year when they passed a government funding bill.

"The reality is that we need all the jobs we can get in this country, in big cities and small towns, so getting this balance right is key," he said.