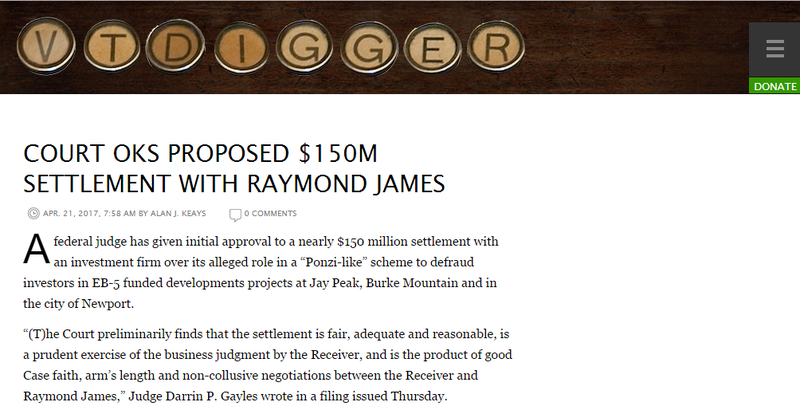 A federal judge has given initial approval to a nearly $150 million settlement with an investment firm over its alleged role in a “Ponzi-like” scheme to defraud investors in EB-5 funded developments projects at Jay Peak, Burke Mountain and in the city of Newport.

“(T)he Court preliminarily finds that the settlement is fair, adequate and reasonable, is a prudent exercise of the business judgment by the Receiver, and is the product of good Case faith, arm’s length and non-collusive negotiations between the Receiver and Raymond James,” Judge Darrin P. Gayles wrote in a filing issued Thursday.

“The Court, however, reserves a final ruling with respect to the terms of the Settlement Agreement, including the Bar Order, until after the Final Approval Hearing.”

That final hearing on the settlement announced last week, according to the judge’s filing, is set for June 30.

A bar order would provide protection for Raymond James against future claims from the receiver and from investors in the EB-5 funded projects. Any objection to the settlement must be filed at the federal court in Miami where the case is pending by June 5 to have an opportunity to be heard at final hearing.

The case is taking place in Miami because that is where Quiros lives and many of his businesses are located.

Any person failing to file an objection by the deadline, Gayles wrote in Thursday’s filing, “shall be forever barred from raising such objection in this action or any other action or proceeding, subject to the discretion of this Court. “

Harley Tropin, a Florida attorney serving as lead counsel in a proposed class-action lawsuit brought by investors against several parties, including Quiros, Stenger and Raymond James, said after the settlement was announced that he didn’t expect his clients will challenge the bar order.

“We’ve discussed it with our clients,” Tropin said. “It’s a great deal and we think all the investors will be benefited by it, they’ll all be favor of it.”

After initial settlement talks took place between Goldberg and Raymond James, attorneys in the proposed class-action case were later brought into the discussion, taking part in a two-day mediation session that eventually led to the settlement.

Tropin said rather than dealing with litigation over several years with the various defendants pointing fingers each other over responsibility for the allegations against them, the settlement brings some closure, at least with the Raymond James portion of the case.

There are about a dozen named plaintiffs in the proposed class-action lawsuit. That lawsuit, according court records, was filed on behalf of a proposed class of all 836 people who invested more than $400 million in the series of projects headed by Quiros and Stenger in northern Vermont as part of the federal EB-5 immigrant investor program.

Curtis Carlson, a Florida attorney representing a group of 33 Chinese investors who decided against joining the proposed class-action case, filed a separate federal lawsuit against Quiros and Raymond James. He said after the settlement announcement that he would need time to review it and discuss it with his clients.

Carlson said his clients invested in various projects, or phases, headed by Quiros and Stenger.

“My initial reaction is that some phases are being treated more fairly than others and that could be a real problem,” Carlson said, declining further comment.

Michael Goldberg, the court-appointed receiver overseeing properties in Vermont’s Northeast Kingdom at the center of the investor fraud case, announced the settlement with Raymond James and Associates Inc. at a press conference at the Statehouse last week.

Goldberg, appointed by a federal judge last April to the post of receiver, oversees Jay Peak Resort and other properties in the Northeast Kingdom after state and federal regulators accused Quiros, the owner of the ski area, and Stenger, the resort’s former CEO and president, of investor fraud.

Stenger has since settled his federal case, while the state case is pending. Quiros has contested the allegations against him in both cases.

Goldberg said Thursday that the action by the judge to preliminarily approve the settlement was expected. Now, the receiver said, he will send out notices to the various parties and investors to inform them of the settlement details and the key dates if they intend to oppose it.

“We are very optimistic that this will get approved,” he added.

A large portion of the settlement funds will be used to refund dozens of investors who put money into projects that never materialized, or weren’t built as pitched. The alleged fraud put in peril the immigration status of many investors seeking permanent U.S. residency. That’s because job creation requirements tied to those investments under the EB-5 foreign investor program for those projects were not achieved.

The Raymond James settlement, if ultimately approved, releases claims against Raymond James and Joel Burstein, Quiros’ former son-in-law, who served as the branch manager of a Raymond James office in Coral Gables, Florida.

Goldberg claimed in his lawsuit that the financial services company and Burstein helped Quiros develop a scheme to commingle and “steal investors’ funds for his own use in breach of partnership agreements.”

Goldberg alleges that Raymond James “aided and abetted” Quiros in a “Ponzi-like” scheme in which he misused $200 million in investor funds, including “looting” more than $50 million.

The settlement provides roughly $80 million to EB-5 investors allegedly defrauded, with the largest chunk of the money going to those who put money into a failed project to build a biomedical research facility in Newport.

The U.S. Security and Exchange Commission has said that project, AnC Bio Vermont, was “nearly a complete fraud.”

The settlement will ensure that contractors and other businesses owed millions will be paid in full for their work and services associated with projects funded through the EB-5 program.

If the settlement is approved after a final hearing, Raymond James will pay the receiver $145.5 million. Combined with $4.5 million Raymond James paid in an earlier agreement with state regulators, that brings the total settlement figure to $150 million.

Most investors in projects at Jay Peak will not get an immediate financial benefit from the settlement, because six of those developments, or phases, were built and are operating.

Investors in Jay Peak’s Tram Haus Lodge, who held promissory notes, will be paid in full with funds from the settlement. Also, the more than 60 investors in AnC Bio will be able to get their money back. That’s because funds from that project were used to cover shortfalls in earlier projects at Jay Peak.

Those investors who do not get immediate funds from the settlement, however, do get the benefit of having debts, such as money owed to businesses and contractors, associated with projects they invested in, paid off so when the properties sell, they will be free and clear to benefit from the proceeds.

Under the settlement, Raymond James admits no wrongdoing. The company has reported that it “accrued” $50 million in expenses related to the case prior to the settlement.

“We believe this resolution is fair and representative of our commitment to redressing the victims’ losses in this case,” Jonathan Santelli, Raymond James executive vice president and general counsel, said in the statement announcing the settlement last week.

The settlement includes $25 million to cover attorneys fees for investors. Attorneys seeking compensation from that fund will have 30 days from Thursday’s order to submit a claim with the court.