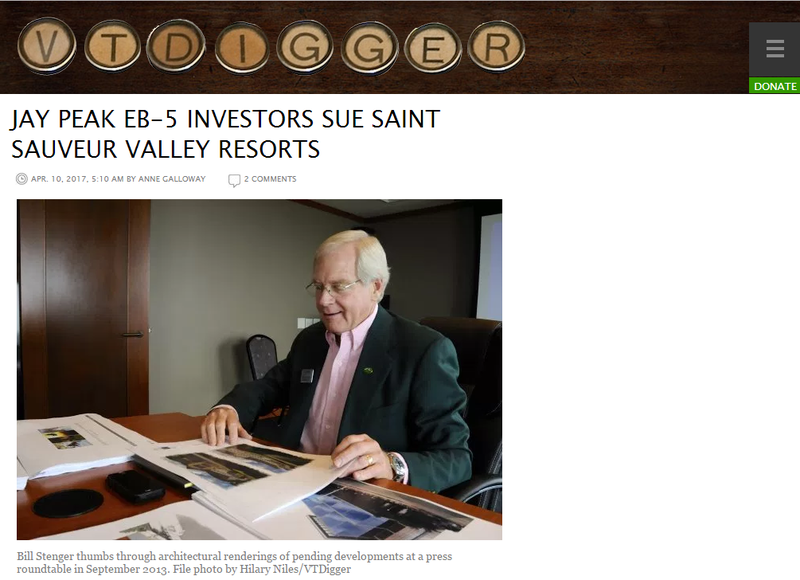 Two EB-5 investors are alleging that a Canadian company “aided and abetted” the alleged fraud at Jay Peak Resort.

The investors are suing Saint Sauveur Valley Resorts Inc. for knowingly accepting $15 million in EB-5 monies as payment for Jay Peak in 2008.

Tony Sutton, an investor in Tram Haus Lodge, and an anonymous investor in Hotel Jay say that the Canadian company had knowledge of the fraud scheme and illegally accepted monies held in escrow for investors as payment for the resort in June 2008.

The claim is a new twist in the Jay Peak fraud saga. Nearly a year ago, the Securities and Exchange Commission sued Ariel Quiros and Bill Stenger, the developers of Jay Peak, for misusing $200 million in EB-5 immigrant investor funds. The Vermont Department of Financial Regulation filed a companion lawsuit against the two men. Stenger has settled with the SEC and has gone state’s evidence; Quiros has fought the federal and state charges.

The case, which doesn’t go to trial until September 2018, hinges on an allegation that a Ponzi-like scheme perpetrated by the two men started with the use of investor monies to purchase Jay Peak.

The SEC lays the blame for the transaction on Quiros and Stenger. Federal regulators did not allege that Saint Sauveur in any way participated in the illegal transfer of funds. In an affidavit, the Canadian company says that it knew nothing of Quiros’ use of EB-5 monies to buy Jay Peak.

Miller, the investors’ attorney, however, alleges that Saint Sauveur knowingly participated in an illegal funds transfer. Miller asked Michael Goldberg, the court-appointed receiver for Jay Peak, to investigate. While Goldberg investigated and considered the claim, he elected not to sue, Miller said.

Goldberg did not immediately respond to a request for comment.

Saint Sauveur started the EB-5 program at Jay Peak in 2006, two years before Quiros bought the resort. Stenger, the longtime CEO of the resort, oversaw the immigrant investor developments at Jay Peak for the Canadian company and raised $25 million from investors between December 2006 through June 2008.

In June 2008, Saint Sauveur gave Quiros control of Jay Peak in exchange for a $350,000 down payment. The Canadian company did not have “a written letter of intent or other agreement” and did not ask for proof that the Miami businessman had the money to make the $23.5 million purchase, about $8 million of which was assumed debt.

Ten days before the closing on June 23, Stenger, acting as general partner of the Tram Haus and Hotel Jay projects, signed a stock transfer agreement with Saint Sauveur. No lender was involved in the transaction, and Quiros was not asked to provide financial statements before the EB-5 stocks were transferred, according to the lawsuit.

In his dual capacities as general partner and an employee of Saint Sauveur, Stenger had signature authority for all of the escrowed EB-5 monies and authorized wire transfers to two brokerage accounts held by the Coral Gables, Florida, branch of Raymond James & Associates.

A lawyer for Saint Sauveur told Burstein that the transferred money should not be used for the purchase of Jay Peak.

Stenger, however, “consciously permitted” $18 million of the escrowed EB-5 investor funds to be turned over to Quiros just days before the closing “for no known purpose,” according to the investor lawsuit.

Quiros took the money from the Saint Sauveur accounts, placed it in accounts he held under Q Resorts, then wired Saint Saveur what he owed for the closing, according to the SEC.

Miller, on behalf of the two investors, alleges that Saint Sauveur took the funds, “knowing the source.”

The attorney claims five counts of securities fraud against Saint Sauveur, including aiding and abetting the fraud, converting escrowed money for payment, breaching the company’s fiduciary duty and unjustly enriching themselves as a result of the fraudulent transfer.