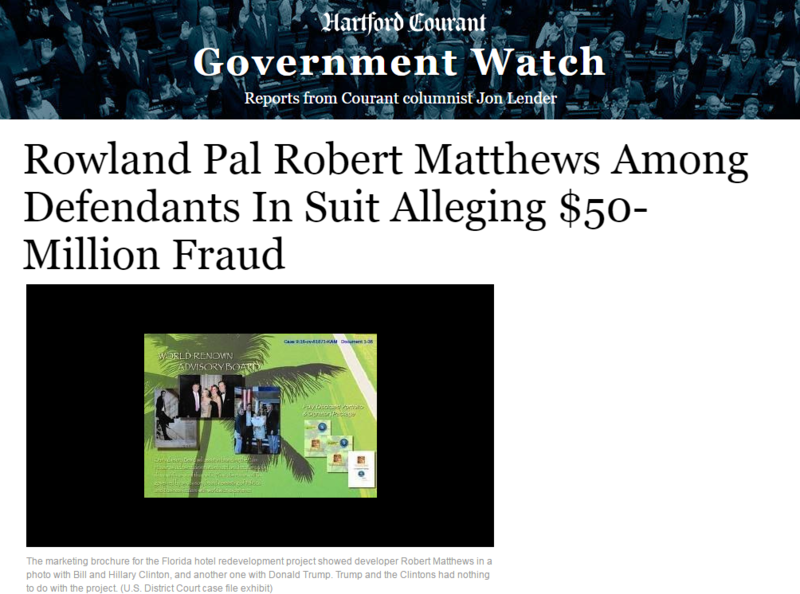 About eight years ago, multimillionaire developer Robert Matthews made news in Connecticut by paying a $2,000 ethics fine related to an episode in 2000 when he got his pal, then-Gov. John G. Rowland, to make a phone call for him in an unsuccessful attempt to close a business deal.

It wasn't Matthews' only controversy involving Rowland. There was also the disclosure in 2004 that he'd bought Rowland's Washington, D.C., condo at an inflated price through a straw buyer. The straw buyer was convicted on a tax charge. Rowland resigned in 2004 and went to federal prison for corruption.

Matthews, however, was never charged with a crime and moved on. Now Matthews is in Florida, still a high-visibility developer with an actress wife — but, again, the public spotlight has found him because of allegations of irregularities and improprieties.

He, his wife, Maria "Mia" Matthews, and brother, Gerry Matthews, are among a crowd of defendants in a federal lawsuit full of allegations that paint a colorful tableau of treachery.

The plaintiffs are 58 foreign investors who say that about 30 defendants — they're referred to as the "Bad Actors" in the suit — bilked them and others out of more than $500,000 each, as part of a $50-million fraud involving the failed redevelopment of a defunct Palm Beach hotel.

The lawsuit says investors were told Matthews was "a successful and famous developer on par with Donald Trump, that he was married to a famous American movie star (Defendant Maria a/k/a Mia Matthews), that he was the head of several charitable organizations, and that he was a trustworthy and honorable person."

The plaintiffs, 53 from China and five from Iran, "are the victims of a ... fraud, theft, and conspiracy" that "preyed on foreign nationals desirous of leaving foreign countries ... to provide their families with the opportunity for a better life in the United States through the EB-5 program," says the lawsuit filed in November.

The EB-5 visa program enables foreigners who invest in developments that create jobs here to gain residential status in this country through U.S. immigration procedures.

"The Bad Actors conspired to fraudulently induce Plaintiffs to each invest $500,000, plus a $40,000 'administrative fee,' into a purported ... real estate project known as the 'Palm House Hotel' which, in reality, was nothing more than a façade pursuant to which Plaintiffs' funds were stolen and distributed among the conspirators," says the lawsuit which was filed in U.S. District Court for the Southern District of Florida.

"Virtually none of Plaintiffs' funds were used develop the property, no jobs were created, and no EB-5 visas were issued to any of the Plaintiffs," the suit said. "Accordingly, over 80 foreigners are now unable to leave their respective countries and have lost their entire life savings."

The suit says Matthews used the plaintiffs' money to pay the mortgage and taxes on his Palm Beach mansion.

Robert and Mia Matthews' attorney, Christopher Kammerer of West Palm Beach, when reached by phone Wednesday, said he would check whether his client wished to comment, but hadn't called back by Thursday.

In a January court filing, however, Kammerer denied "that Robert Matthews and Maria Matthews stole any of Plaintiffs' money" or did anything wrong. Gerry Matthews' lawyer denied wrongdoing by his client in a similar filing.

One of the suit's more explosive allegations is that Matthews and his wife used two business entities, one in the Cayman Islands, "to steal Plaintiffs' money and purchase a $5,750,000, 151-foot yacht."

The yacht, called "Alibi," was later sold, with proceeds turned over to a court-appointed receiver for the project.

However, Matthews' attorney said in the court filing, "The purchase of the yacht ... was part of the Palm House project and was disclosed to Plaintiffs in [a] Private Placement Memorandum." Matthews has said the vessel was supposed to be associated with a contemplated "Club Alibi" at the hotel.

Promotional brochures for the hotel and condominium and development, a short walk from the ocean, contained photos of Matthews posing with former President Bill Clinton and Hillary Clinton, and with Donald Trump. They appeared under the heading "WORLD RENOWN ADVISORY BOARD" although the photos were taken in earlier settings unrelated to the project, with which the Clintons and Trump weren't connected.

The marketing literature, entered as exhibits in the suit, was in Chinese, Farsi and English.

Plaintiffs said they were told "Donald Trump and Bill Clinton would serve on the Palm House Hotel advisory board and ... play a key role in recruiting celebrities and dignitaries to the club" such as Tony Bennett, Celine Dion, Bill Koch and Eric Schmidt.

The suit says Robert Matthews and others took Chinese investors' representatives to a charity event at the Mar-a-Lago resort in Palm Beach and "arranged for them to take pictures with Donald Trump in an effort to further create the façade that Robert Matthews was an important, wealthy, and trustworthy member of American society and on par with Donald Trump."

It also claims Matthews and others "staged the Palm House Hotel work site, hiring 'workers' to be present at the site in order to create the appearance that work was actually being performed" but "this was merely an acting job." Matthews denies this.

The investors' action is the latest in a series of convoluted lawsuits surrounding the project for nearly a decade.

Another defendant is Joseph Walsh, president of the South Atlantic Regional Center, LLC (SARC), which had authority from the government to deal the foreign investors under the EB-5 visa program.

The investors' suit says "Walsh was the criminal mastermind ... and organized all the players and their respective roles. Walsh and his accomplices made material, false representations to Plaintiffs that induced them to provide and continue with their investments."

Matthews, too, is pointing the finger at Walsh. Kammerer said in his January filing on Matthews' behalf that "any injury or damages" to the plaintiffs are "due to the fault of Joseph Walsh" and others associated with SARC who used investors' funds "for their own personal purposes,"

But Walsh denies that accusation or any wrongdoing. His attorney, Henry B. Handler of Boca Raton, said Thursday that Walsh is being unfairly accused by frustrated foreign investors of improprieties that Walsh had uncovered, himself, in litigation aimed at righting the wrongs of Robert Matthews and his associates.

SARC heads a limited partnership called Palm House LLLP that includes the foreign investors and distributed the investment funds intended for the project's development. Walsh, SARC and the partnership issued a statement Dec. 29 saying that they "vigorously deny the allegations in the ... Federal lawsuit."

Walsh and his people had no "involvement in the improper use of loan proceeds by named defendants, Robert Matthews and his wife, Mia Matthews, and his brother Gerry Matthews and their related entities and accomplices," the statement said, adding: "To the contrary, the Palm House, LLLP and Mr. Walsh have been successful in their State Court lawsuits in having a Court-appointed Receiver take control of the Hotel property."

"The Court has also taken control of the sales proceeds of the 151-foot luxury yacht purchased by Mia Matthews with funds inappropriately siphoned from the loan for development and construction of the Palm House Hotel," the statement said. It went on: "The Palm House, LLLP and Mr. Walsh plan to continue the prosecution of their civil lawsuits to recapture diverted loan proceeds" and to pursue financial restructuring to complete the hotel — which would "create the jobs necessary to complete the immigration application process in which the Plaintiffs originally invested."

Rowland, meanwhile, is back in federal prison. Last September, he started serving a 30-month sentence after a 2015 conviction for conspiring to violate campaign finance reporting laws. He was found guilty of concocting sham consulting contracts to conceal his role as a paid operative for two Republicans' unsuccessful congressional campaigns.

Rowland — who served eight months in prison a decade ago for corruption as governor — began serving his new sentence in federal prison in Otisville, N.Y., but has been moved to another facility in Lewisburg, Pa.