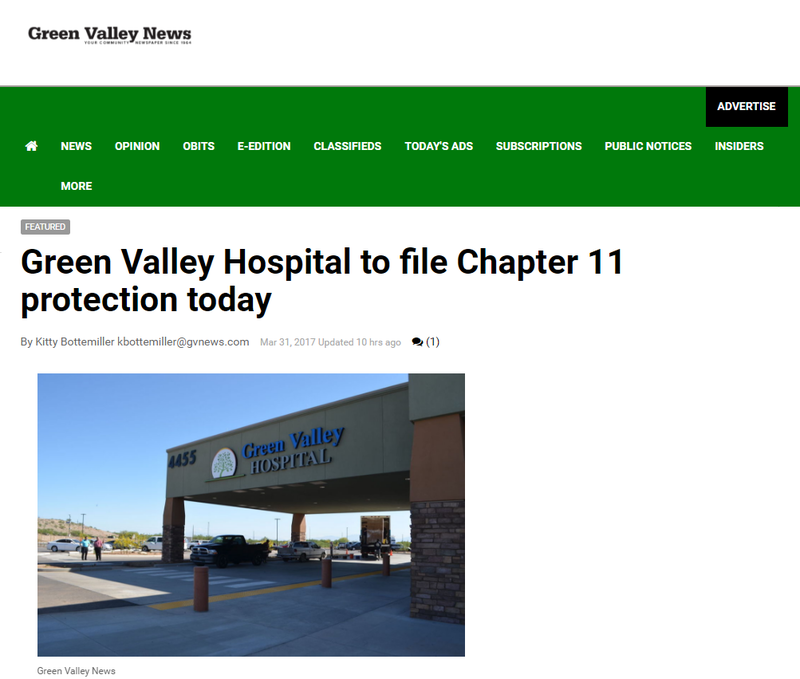 The CEO of Green Valley Hospital said it will file Chapter 11 bankruptcy protection today to get out from under crushing debt and to secure the long-term financial stability of the area's first hospital.

John Matuska said Friday that the filing will bring no obvious impact to day-to-day operations, and that there will be no layoffs or reductions in services.

“You wouldn't even know it if it wasn't public,” said Matuska, who became the hospital's third CEO in October.

He said the long-anticipated move came about because the hospital was overbuilt and undercapitalized, and that the filing will “clean up the massive amount of debt at a high interest rate, plus fees” incurred since it opened in 2015. Chapter 11 allows an organization protection from creditors for a time as it reorganizes.

Total liabilities are $88 million; a hospital of this size — 49 beds — should have debt of about $37 million, he said. Matuska said he expects the bankruptcy process, which involves “a couple hundred” creditors, to take about five months.

“It really is a new beginning for the hospital once we get through this,” he said.

He has met with the major doctor groups serving the hospital, and began two days of meeting with the roughly 300-member staff early Friday to explain the decision.

Matuska said the term “bankruptcy” may sound scary to some, but believes that under the new corporation expected to result, the hospital will come out financially stronger.

“There was no other option to solve this problem,” he said.

Having the hospital in a somewhat rural area to serve a seasonal population is still a good idea, he said, and they are working on establishing an affiliation with a Tucson hospital to improve business, and Tucson Orthopedic, which already has doctors on call, starts its clinic operation April 10. He said the hospital is not for sale and is not looking for a buyer.

Rumblings of a bankruptcy filing have resonated for weeks and it didn't come as a surprise to community leaders, the Green Valley Fire District, ambulance services and others, he said.

“It was expected that something was going to happen,” Matuska said. “(From some) I heard, 'It's about time.'”

He said the hospital has made tough but necessary decisions to turn things around financially, including making settlement agreements with vendor providers.

“To do this, we must show the court we've made specific improvements,” and the hospital is now in a position where it can prove such measures, Matuska said.

“The goal is to reach the point where the hospital's debt is manageable,” he said.

When the new corporation is created, a lot of financial responsibility will transfer, such as accumulated employee benefits, salaries and physician contracts. Part of the plan calls for the court to issue a stay providing that vendors must continue delivering on their contracts, Matuska said.

He said hospital developer McDowell Enterprises has a minor role in decision-making after it was “bought out” in November. The hospital is 80 percent owned by the Green Card Fund — the EB-5 visa program under which it was built — and 20 percent by Mexican and local investors. Green Card Fund investors in the Green Valley Hospital all are from China, Matuska said.