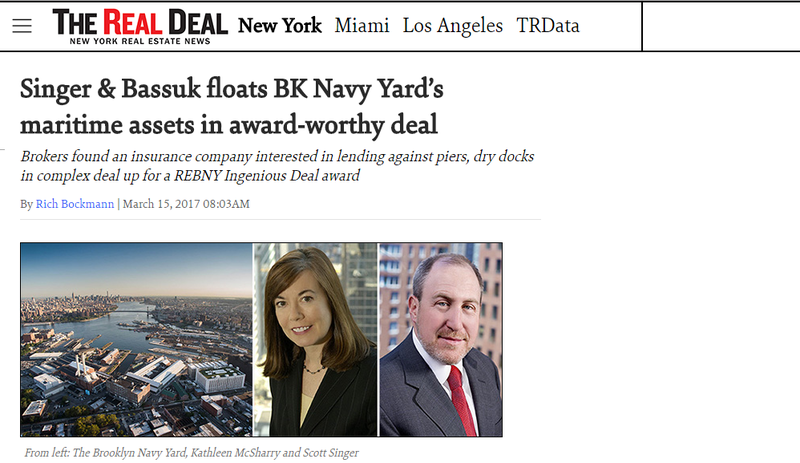 The Brooklyn Navy Yard is a lynchpin of the borough’s cutting-edge Tech Triangle, but there are many elements of the 300-acre campus that are decidedly turn-of-the-century – the 19th century.

While the yard is home to high-tech solar panels and a green manufacturing center, there are decidedly low-tech elements like piers, dry docks and a power plant that proved to be challenges when the Brooklyn Navy Yard Development Corp. went to refinance $60 million in EB-5 debt last year.

But by splitting the new loan between the property’s conventional and unique assets, while also reworking the yard’s ground leases that dated back to the Ed Koch administration, a team of brokers at the Singer & Bassuk Organization came up with a solution that’s in the running for the Real Estate Board of New York’s top deal making prizes.

Singer & Bassuk’s submission, entitled “It’s Not Just a Job, It’s an Adventure,” is one of 15 transactions up for one of REBNY’s Most Ingenious Deal of the Year Awards, the winners of which will be announced at the sales committee’s annual cocktail party April 4 at Club 101.

The deals offer a behind-the-scenes look at the ins and outs of how some of the city’s most complex transactions get done.

One of the challenges the Navy Yard’s development corporation faced when it went to refinance its debt is that the existing EB-5 investors had lent against the entire 300-acre yard, which sits on one tax lot the city leases to the development corp.

“That was a financing structure that made a lot of sense for all parties at a time when there was fairly limited economic activity at the Navy Yard,” said Singer & Bassuk’s Scott Singer. “The particular purpose was to energize the yard and make it a more dynamic place that would be able to attract more conventional investment.”

But traditional lenders are accustomed to looking at individual assets, and as the campus evolved and became more financially complex it became clear the development corp. would have to offer up individual assets as collateral. The Navy Yard, home to about 7,000 employees, was also looking for a long-term 20-year loan, which essentially left traditional banks out of the equation and meant they’d have to turn to insurers or pension funds.

Singer, along with his colleague Kathleen McSharry, looked at some 40 different assets with more than 300 tenants and decided the best place to start would be the traditional office/manufacturing buildings. But even that came with its challenges, as the Navy Yard typically charges rents on manufacturing spaces that are about 20 percent below the market rate. The solution was to focus on single-tenant, net-leased buildings and properties, where the income would be more predictable.

But the yard still needed more collateral to get up to its $60 million goal, so the brokers started looking at less conventional real estate assets. They included piers, a co-generation power plant and dry docks.

The Navy Yard is one of the few places in the northeast that has these dry docks – 900-foot-long, 150-foot-wide “bathtubs” on land with 20-foot-thick concrete walls – that have steady demand for boats and ships that have to be pulled out of the water and regularly inspected for registration.

Singer & Bassuk was able to team up with Washington-based Symetra insurance, which was interested in lending on the piers, but only up to about $10 million. The brokers kept going back to the market, and after a while they were able to convince Symetra to lend against the piers and the power plant with a $31.68 million, self-liquidating loan that the Navy Yard would pay off by expiration in 21.5 years.

“Before Symetra arrived – it isn’t that there was specifically negative commentary – but the lenders were saying they didn’t know anything about shipyards and piers,” Singer said. “And no real estate lender had ever underwritten a power plant.”

The final piece of the puzzle fell in place when the brokers turned to Sterling Bank, the servicer for the EB-5 lenders, which agreed to a 15-year fixed-rate loan of $30.75 million.