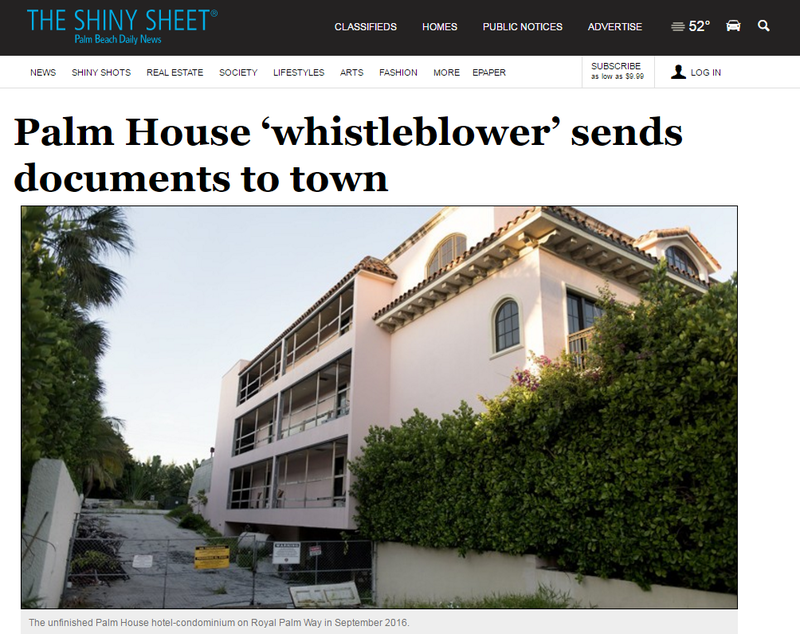 The Palm House project took another turn this month when someone involved in the now-defunct condominium-hotel emailed a self-proclaimed “whistleblower” tip to Town Councilwoman Danielle Moore.

The email included three attachments that allege JJW Consultancy, a Delaware-based LLC that solicited money for the project, is involved in a variety of fraudulent projects around the country. The whistleblower also forwarded the email to the Daily News.

“I am an anonymous insider within the Palm House Florida EB-5 projects and have gotten the courage to blow the whistle on significant fraud going on behind the scenes,” the email, dated Jan. 13, stated. “I am prompted to contact you because your recent comments about the project made me believe that you may be sympathetic and helpful to a Whistleblower such as myself.”

Two days earlier, Moore voiced her hesitance at voting to approve a year-long extension that allowed the court-appointed receiver of the property to pursue financing for the project.

“I will tell you I am really tired, and I think the rest of this town are really sick of this project,” Moore said at the meeting.

“I didn’t spend 30 seconds with the email. I didn’t read it,” Moore said in a phone interview Thursday.

Bradford said he didn’t respond to the email.

“Unless it’s an extremely unusual circumstance, we don’t respond to an anonymous complaint,” Bradford said in a phone interview Friday. He added that EB-5 programs have “nothing to do with us.”

Glickstein did not respond to a phone message Friday.

JJW Consultancy was a defendant named in a federal court case last year alleging the Palm House is at the center of a vast criminal scheme in which more than 50 investors in China and Iran were defrauded out of $50 million. The suit was filed Nov. 14 in U.S. District Court in West Palm Beach. Among the defendants are Palm Beach developer Robert Matthews and his wife, Mia Matthews, Joseph Walsh and his son Joseph Walsh Jr., who operates JJW Consultancy.

That suit stated JJW Consultancy was part of a complex system by which investors were induced to invest $500,000, plus $40,000 in administrative fees, in an EB-5 program. Such programs are federally funded to encourage foreign investment that create domestic jobs in exchange for visas.

According to the whistleblower email, the scheme is much larger. The email alleges that JJW Consultancy is involved with several other fraudulent projects — at least one of which is now defunct — including the Pacific Proton Regional Therapy Center, projects associated with the Oriental Dolphins EB-5 Regional Center, Carbolosic Energy and the Greystone Hotel in Miami.

“JJW Consultancy receives large undisclosed commissions in connection with its unlicensed brokering of these securities and has set up significant marketing structures to target Chinese nationals who are studying in the US on long term student VISAs,” the email said.

The Pacific Proton Therapy Regional Center program was based in Southern California and involved a similar alleged scandal, according to documents filed by the U.S. Securities and Exchange Commission in June in federal court in Los Angeles. The SEC said a husband and wife swindled $27 million from 50 Chinese investors to build a proton beam radiation center that never got built.

Instead, the SEC said, a large chunk of the money went into the couple’s personal account. According to the SEC, the project’s promotional information touted that the project would create more than 4,500 new jobs and would guarantee residency for investors.

One website for the Pacific Proton project had a “government support” section that featured a false endorsement with photos of former President George H.W. Bush and former Gov. Arnold Schwarzenegger, the SEC said.

The Greystone Hotel was supposed to create 634 jobs but closed in January 2010, according to an EB-5 investments website. The site labeled the project’s legitimacy as “not verified.”

A website for the Carbolosic Energy project couldn’t be accessed Friday because it is only available to computers with IP addresses outside the United States. According to the whistleblower email, that project was set up by JJW Consultancy after the couple that ran the Pacific Proton center was indicted on fraud charges.

The email ended with a plea for the recipient to share the information with state and federal law enforcement agencies.

“Thank you for your time and consideration, I genuinely hope that this evidence and the assistance provided can assist you in your efforts to safeguard our financial markets,” it said.

The whistleblower did not respond to an email this week.