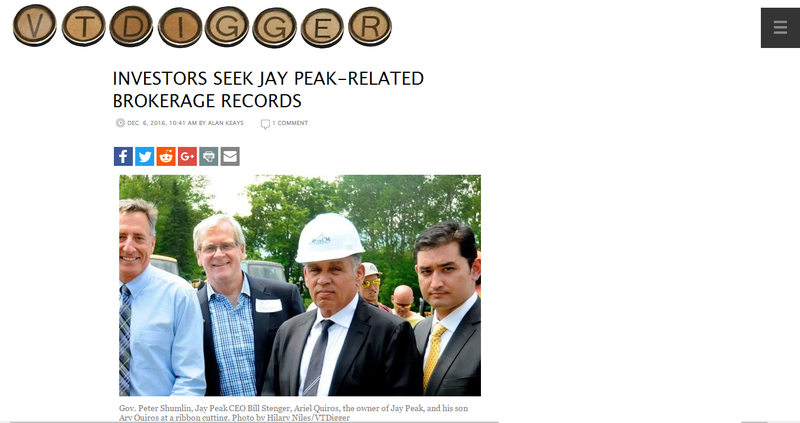 Attorneys in a class-action lawsuit against Jay Peak owner Ariel Quiros are seeking electronic records from his former son-in-law who managed accounts at the brokerage firm Quiros allegedly used to defraud investors.

“After months of ineffective and intermittent back and forth, Plaintiffs still lack basic information necessary to move discovery along in this case,” Thomas Tucker Ronzetti, the attorney for the investors in the class-action lawsuit, wrote in a recent motion.

He later added, “Plaintiffs have been patient and reasonable with Joel Burstein, but to no avail.”

The class-action case, led by Brazilian investor Alexander Daccache, asks a judge to “compel” attorneys for Burstein to conduct electronic searches for terms related to the case for his personal devices, such as iPads and iPhones, as well as any cloud storage system he may have used.

Attorneys for the investors and lawyers for Burstein, account manager for his father-in-law at Raymond James branch in Florida, have been going back and forth over what the search terms related to the case should be as well as how to go about the search. There are also questions whether the devices from several years ago are even available.

“Burstein has also refused to state whether certain devices will be searched for responsive ESI (electronically stored information),” Ronzetti wrote, “verify whether ESI searches will cover cloud storage services, or confirm information about device contents that may otherwise be available to him and thus should be included in his ESI searches.”

Also, the debate between the parties involves the intricacies of Boolean searches and how to conduct them. Boolean searches allow a user to broaden, or limit a search, by combining terms with words such as “and, “or,” or “not.”

“Plaintiffs promptly addressed counsel’s questions, defined the referenced Boolean operators, and explained that depending on the system used to conduct the search the term ‘ari’ may not pick up ‘ariel,’” Ronzetti wrote.

The latest motion by the attorneys for the investors asks a judge to set a Dec. 30 deadline for lawyers for Burstein to conduct the searches and provide whatever relevant information they find.

Burstein was a manager of a Coral Gables, Florida, branch of Raymond James where Quiros kept Jay Peak investor funds. Those funds were raised through the EB-5 immigrant investor program and meant for development projects in Vermont’s Northeast Kingdom, including hotels at Jay Peak and Burke Mountain.

The Daccache lawsuit followed, with attorneys for investors alleging that Quiros “orchestrated” the fraud, while Stenger, Burstein and Raymond James “enabled” the alleged fraud.

The bank, according to the Daccache lawsuit, allowed Quiros to create “an intricate web of transfers among various accounts at Raymond James to disguise the fact that most of the seven projects were either over budget or experiencing shortfalls.”

These shortfalls were due in large part to Quiros allegedly taking millions of dollars of investor money for his own use, the lawsuit states.

Since the filing of the Daccache lawsuit, attorneys for the investors have submitted several motions in recent months seeking records from several parties related to the case, including Raymond James and Jong Weon (Alex) Choi, a longtime business associate of Quiros.

Nicole Quiros, an accountant, had been married during the time of the alleged fraud to Burstein. Ary Quiros had operated Q Burke Mountain Resort in Vermont until it was later seized by federal regulators when they filed their lawsuit in April.