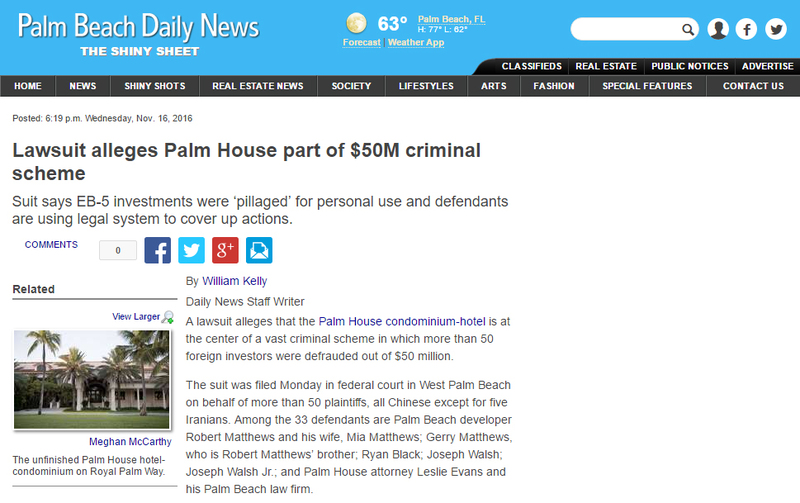 Suit says EB-5 investments were ‘pillaged’ for personal use and defendants are using legal system to cover up actions.

The suit was filed Monday in federal court in West Palm Beach on behalf of more than 50 plaintiffs, all Chinese except for five Iranians. Among the 33 defendants are Palm Beach developer Robert Matthews and his wife, Mia Matthews; Gerry Matthews, who is Robert Matthews’ brother; Ryan Black; Joseph Walsh; Joseph Walsh Jr.; and Palm House attorney Leslie Evans and his Palm Beach law firm.

The plaintiffs seek monetary damages, a court order freezing what remains of their investments, and dissolution of the limited partnership and any other entities involved with the alleged scheme.

Just steps from the ocean, the Palm House at 160 Royal Palm Way, has been through construction under different owners since 2007.

According to the suit, a web of conspirators preyed on foreign nationals by inducing them to each invest $500,000, plus a $40,000 administrative fee, into the hotel. But the hotel was “nothing more than a facade pursuant to which plaintiffs’ funds were stolen and distributed among the conspirators.”

The plaintiffs sought to leave their home countries for opportunities in the United States through the EB-5 Immigrant Investor Program, which channels money from foreign investors into construction projects on American soil.

The plaintiffs were told the EB-5 money would not be used unless the developers exhausted their own investment of more than $22 million and a $29 million bank loan they had obtained, according to the suit. They also were told the luxury condominium hotel was nearing completion and would open for the 2013-14 season.

But the EB-5 funds were not held in an escrow account, according to the suit.

“Instead, contrary to all of the written and oral representations, plaintiffs’ funds were improperly transferred from the escrow account to other accounts and pillaged for the personal pleasure of the conspirators.”

The defendants used the EB-5 investments to buy multiple homes; investment properties; a 151-foot yacht that cost nearly $6 million; luxury cars; vacations; and to pay off millions of dollars of personal debt, including $266,000 in back taxes, according to the lawsuit.

Virtually none of the EB-5 money was used to develop the property, no jobs were created, and no EB-5 visas were issued to any of the plaintiffs, the lawsuit states. “Accordingly, over 80 foreigners are now unable to leave their respective countries and have lost their entire life savings.”

‘Grease all the wheels’

The EB-5 funds also were used to “grease all the wheels that furthered the criminal scheme, including using licensed attorneys who held a fiduciary duty to help fraudulently induce investments,” the lawsuit states.

The defendants are using the legal system to cover up their conduct “bringing neutered, passive claims against one another and not seeking criminal prosecution,” the suit states. “While this may give the appearance — to the press and the courts – that justice is being pursued, in reality the legal ‘actions’ have done nothing to right the wrongs or return the funds … “

These legal “actions” have resulted in no criminal prosecutions or asset forfeitures, but have served as obstacles to the victims’ attempts to obtain visas, discover what happened and seek redress, the lawsuit states. The defendants are negotiating a final distribution of the EB-5 funds among themselves with the intention of representing such an agreement as a “mediation settlement” of all the claims.

The lawsuit goes into detail about how the EB-5 investors were allegedly convinced to invest. Bill Clinton, Donald Trump, Celine Dion, Bill Koch and Eric Schmidt would be part of the Palm House Hotel Advisory Board, the investors were told. In one instance, Robert Matthews and two other defendants took the Chinese plaintiffs’ immigration agents to a charity event at Mar-a-Lago and arranged for them to take pictures with Trump to develop the facade that Matthews “was an important, wealthy and trustworthy member of American society and on par with Donald Trump.”

The suit seeks to place a lien on Robert Matthews’ Palm Beach home.

The plaintiffs also were told that, once completed, the Palm House would be worth $144 million, according to the suit.

‘Organized all the players’

Robert Matthews bought the property in 2006 but lost it in foreclosure three years later to Wellington developer Glenn Straub, who bought it for $10.1 million. In 2013, Straub, who is not named as a defendant in the suit, sold the Palm House to an entity controlled by the Matthews family and Ryan Black in exchange for a nearly $27.5 million mortgage, according to the suit.

The suit contends that Joseph Walsh, who was a general partner of the Palm House until July, was “the criminal mastermind behind the Palm House fraudulent scheme, and organized all the players and their respective roles.”

Walsh arranged to provide legal services to the plaintiffs, which ensured that outside lawyers would not be hired by the non-English speaking investors, the suit alleges. A company associated with Walsh issued a $39.5 million second mortgage on the property.

Robert Matthews and others involved in the project face at least two other lawsuits alleging misuse of $16 million lent to build the hotel-condominium. The Palm House is in foreclosure proceedings; in 2015, it was placed under the control of a court-appointed receiver, Cary Glickstein, who also is mayor of Delray Beach. The project has racked up $2.5 million in daily town fines, mostly related to the failure to meet a February 2013 deadline to complete construction.

The plaintiffs are represented by the West Palm Beach law firm Gunster Yoakley & Stewart. Keith Sonderling, an attorney with the firm, said he had no comment beyond the lawsuit, which includes a 100-page legal complaint and 350 pages of supporting documents.

Evans, the Palm House attorney, said Wednesday that Walsh wired him funds and instructed him to send money to Matthews and others. Evans said he didn’t know where the money came from.
“It was not for me to ask,” he said.