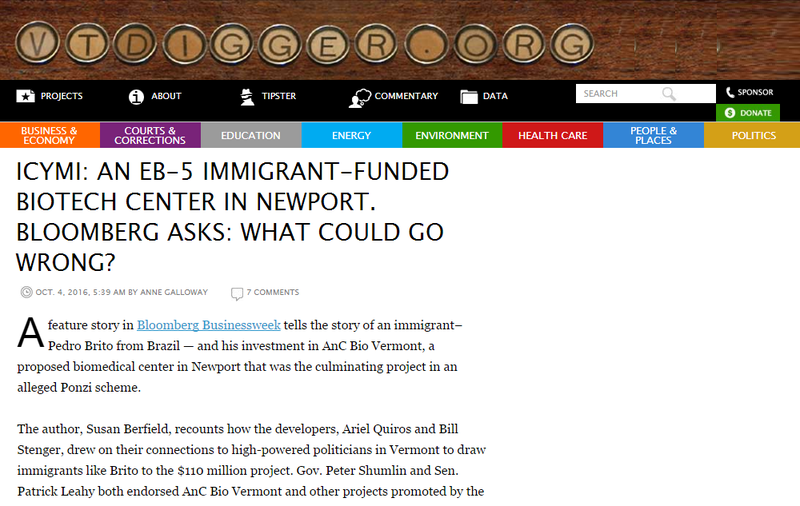 A feature story in Bloomberg Businessweek tells the story of an immigrant– Pedro Brito from Brazil — and his investment in AnC Bio Vermont, a proposed biomedical center in Newport that was the culminating project in an alleged Ponzi scheme.

The author, Susan Berfield, recounts how the developers, Ariel Quiros and Bill Stenger, drew on their connections to high-powered politicians in Vermont to draw immigrants like Brito to the $110 million project. Gov. Peter Shumlin and Sen. Patrick Leahy both endorsed AnC Bio Vermont and other projects promoted by the developers.

In exchange for his investment, Brito expected to get a U.S. visa.

Instead, Brito and his fellow investors in AnC Bio Vermont and projects at Jay Peak Resort were defrauded and their dream of U.S. citizenship is on hold. Federal regulators charged the developers with 52 counts of fraud and allege the two men misused $200 million.

Berfield writes that Quiros and Stenger failed to tell investors that they were under investigation by the Securities and Exchange Commission.

The Bloomberg story links to VTDigger’s EB-5 landing page and credits the news organization with questioning the finances of the Jay Peak developments in 2014.

The New York Times cited VTDigger’s work in May. PBS Newshour interviewed Anne Galloway about her two-year investigation of the Jay Peak developers in December 2015 and again in July.