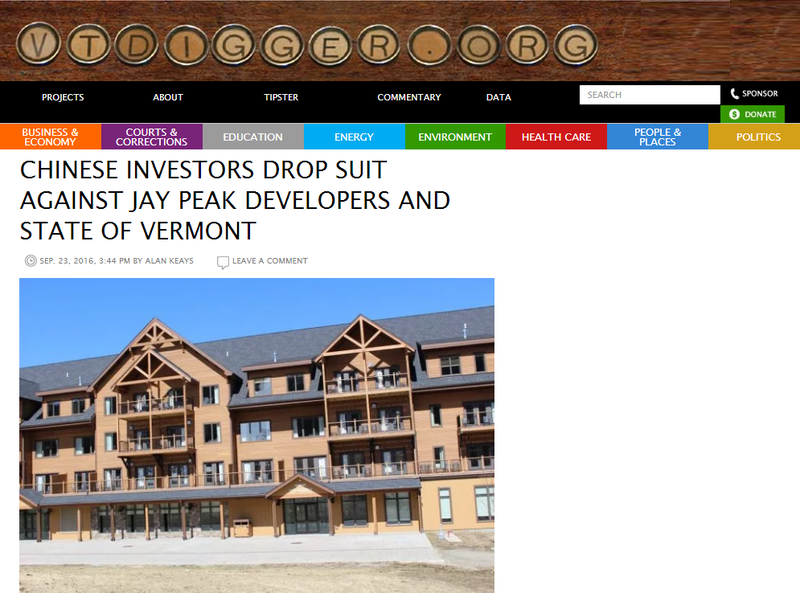 The attorneys for two Chinese citizens who claimed they were defrauded when they invested in the EB-5 funded Q Burke Resort project in the the Northeast Kingdom have abruptly dropped their lawsuit.

In addition to suing the project developers and the state Department of Financial Regulation, the brother and sister accused an attorney, Charles Leamy, of pitching them an investment in the project, and then collecting a $20,000 retainer to represent them as their immigration attorney.

Judge Robert Mello announced news of the “voluntary dismissal” of the case at the start of a hearing Friday in Chittenden Superior Court in Burlington.

“I’m not in a position to comment,” attorney Pietro Lynn, who represents Minggan Wei and his sister, Zhoa Wei, said after the hearing. “I can’t speculate as to why. I simply received instructions to file a notice of dismissal without prejudice.”

The pair claimed in the lawsuit they were out more than $1 million for the investment in exchange for permanent U.S.residency through the federal EB-5 immigration program.

“The clients are reserving their rights to pursue claims in other forums or through the receiver,” Lynn added. “That’s entirely within their prerogative.”

Lynn referred more specific questions to attorney Scott Kaiser, a New York City-based attorney, who he described as the “principal contact” for the Weis. Kaiser, who did not attend Friday morning’s brief hearing, declined comment when reached by phone.

Robert Kaplan, Leamy’s attorney, did not attend the hearing. In court filings, Leamy denied any wrongdoing.

“Charles Leamy has always been prepared to vigorously defend his reputation for integrity and excellent client service,” Kaplan said. “Mr. Leamy understands that Minggan Wei and Zhao Wei have decided to withdraw their claims against him and has agreed to the termination of the pending lawsuit. Mr. Leamy hopes that, with the litigation out of the way, the Weis will permit him to complete their immigration applications so that they may obtain the immigration status to which they are entitled.”

The Weis claim in the lawsuit that once federal regulators began to scrutinize Stenger and Quiros, the state Department of Financial should not have allowed new investors to be put at risk in the Q Burke project before “an essential financial review” of the project was complete.

Earlier this month, the hotel in East Burke officially opened to the public. However, many amenities included in initial investment offering documents, such as mountain biking, tennis and aquatic centers, never materialized.

A court-appointed receiver oversees the properties involved in the fraud allegations against Stenger and Quiros, including the one the Weis invested in, Burke Mountain Hotel in East Burke.

In his court filing, Leamy denied working for Quiros and Stenger at the time he accepted the $20,000 to provide legal services related to immigration.

The hearing Friday was scheduled for several of the defendants to argue in favor of delaying the case until earlier lawsuits over fraud allegations involving the developers were resolved, and so the receiver could sort out the claims.

Those legal proceedings include the case brought by the U.S. Securities and Exchange Commission in Florida, and other class-action federal court litigation currently underway.

The filings provide no specifics on the reasoning behind dismissing the case.

Assistant Attorney General Kate T. Gallagher, representing the state Department of Financial Regulation, was one of nearly 10 attorneys for parties named in the lawsuit who attended the hearing Friday. She said after the hearing she did not know why the case was dismissed.

“I think it is the right result,” she said. “The hotel was built, it’s operating, it’s ongoing, it’s hiring people. It could be sold as a valuable asset that could make them whole so certainly those are issues that should be resolved, we thought, before this should be heard.”

She added that it may not be the end of the litigation.

“I think the better course is for them to proceed in federal court,” Gallagher said, “and I presume that’s what they’re thinking.”

The lawsuit named several parties as defendants who were involved in the Burke Mountain development.

Other defendants were PeakCM of Winooski, the project’s construction contractor; Gardner Kilcoyne Architects of Williston, the project’s architects; and White + Burke Real Estate Investment of Burlington, the third party administrators who reviewed construction payments for the state.

Sandy Fead, PeakCM’s attorney, had filed a motion Friday morning shortly before the hearing seeking to dismiss the case against his client.

“It did catch us all by surprise,” Fead told the judge of the Weis’ motion dropping their lawsuit. “On the other hand, I just filed a motion to accomplish exactly this.”