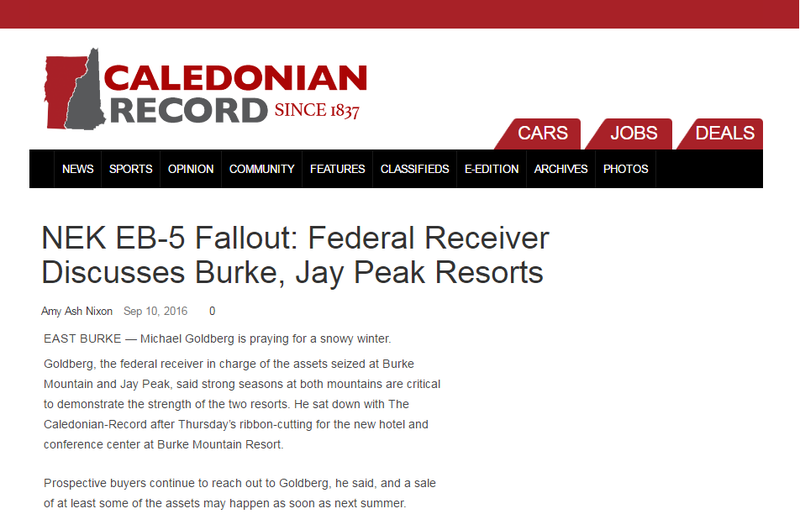 Michael Goldberg is praying for a snowy winter.

Goldberg, the federal receiver in charge of the assets seized at Burke Mountain and Jay Peak, said strong seasons at both mountains are critical to demonstrate the strength of the two resorts. He sat down with The Caledonian-Record after Thursday’s ribbon-cutting for the new hotel and conference center at Burke Mountain Resort.

Prospective buyers continue to reach out to Goldberg, he said, and a sale of at least some of the assets may happen as soon as next summer.

How well the ski resorts are doing will help to drive the market value buyers put into the offers, Goldberg explained. He said a multiplier effect helps to determine what the market will bear, and the better the resorts are doing financially, and the stronger their books, the higher the asking price can go.

That is in the interest of investors, who were promised grand outcomes but now have their money tied up in an alleged scandal.

Goldberg was appointed in April by U.S. District Judge Darrin Gayles in Miami, Florida, to take charge of the assets owned by Ariel Quiros in his Northeast Kingdom Economic Development Initiative. That included Jay Peak, Burke Mountain, and six other partnerships in the program aimed to rejuvenate the struggling region with promised jobs and infrastructure.

Following a lengthy probe by the federal Securities Exchange Commission (SEC) and Vermont’s attorney general, as well as the Vermont Department of Financial Regulation and the Agency of Commerce and Community Development, allegations were made in April accusing Quiros of masterminding an 8-year Ponzi-like scheme to defraud international investors in the EB-5 program.

The federal EB-5 program allows immigrant investors to obtain permanent U.S. green cards through investment in economic development projects which have demonstrated either job preservation or creation; in the case of the NEK projects, more than 700 investors from around the world pledged more than a half million dollars each.

Getting the new hotel and conference center at Burke Mountain opened is a huge step out of the darkness for the assets Goldberg is tasked with getting back on course.

At Thursday’s ribbon-cutting, he was thanked publicly by Gov. Peter Shumlin, who said, “We’ve made him a Vermonter. He’s more a Vermonter every single day.”

Goldberg was in the background at the event. After the public event, he stood with the governor to field questions from a handful of reporters.

A hotel guest asked Goldberg if the missing funds - about $55 million alleged to have been siphoned off of projects by Ariel Quiros - was traceable, and if it was recoverable.

Goldberg said forensic reports show where the money went to, and said authorities are working to recover the diverted funds. When he was asked about Bill Stenger having been kept on staff at Jay Peak, working with the receivership the past five months (until last week), Goldberg said forensics do not show any diverted funds going to Bill Stenger at all.

“Bill Stenger did not line his pockets,” Goldberg emphasized.

Both Quiros and Stenger are alleged to have misappropriated more than $200 million in investor funds; Quiros alone stands accused of diverting $55 million directly to accounts for his personal use.

“Forensic reports show the money flowed to Quiros,” said Goldberg, “…and not to Bill Stenger.”

Goldberg expressed appreciation for Stenger working with the receivership since April, and said the fact Stenger has been involved with Jay Peak for 34 years means he has knowledge to a depth no one else does. Instead of hiring high-priced experts to help with information on the properties, Stenger could be tapped for that information.

Stenger will continue to help the receivership, both Goldberg and Stenger said this week.

Goldberg said the properties will be marketed both as a set of assets, and independent of one another, to see whether they can sell for more money together or in parts.

An offer that came in from a company in South Florida recently to buy Jay Peak for $93 million is not considered a legitimate offer, Goldberg said, and is not being taken seriously.

Goldberg has been focused on bringing in as much money as possible to keep the two resorts running, and to have them in a good position for the coming ski season; at Jay Peak, that included nearly a $5 million investment in tram repairs, now complete.

Jay Peak has done 60 weddings this season and hosted many very strong events, and is doing well, said Goldberg.

The new hotel at Burke has booked a handful of weddings and the conference center is seeing strong bookings already, staff report. This weekend, the 116-room hotel is completely sold out, guests at the ribbon-cutting event were told.

Goldberg is working at the same time to find the funds to pay down millions in debt owed by the properties, including about $4 million to the contractor and subcontractors for the new hotel, and more to contractors affiliated with Jay; another $5 million to vendors, and other more.

“We owe a lot of money, and we are going to get everyone paid,” vowed Goldberg. “We’re listening to them, and we feel horrible about the position they are in.”

Ariel Quiros is squarely to blame for the mess, said Goldberg, “He’s the person who brought us all to this party. I wouldn’t be here if it weren’t for the diversion of funds.” He said the receivership walked into a situation with “zero money” and had to struggle “to keep the lights on.”

Asked about the ability of the receivership to sell the properties before Ariel Quiros’s day in court is done, Goldberg said, “The judge can authorize me to sell” at any time. The judge in this case, a U.S. District judge, is very powerful, and is a presidential appointee, said Goldberg. “If he believes it is in the best interest to sell now,” he can make that decision.

The temporary restraining order issued in the case against Quiros - and the freezing of his assets - already has “found that the fraud occurred,” said Goldberg.