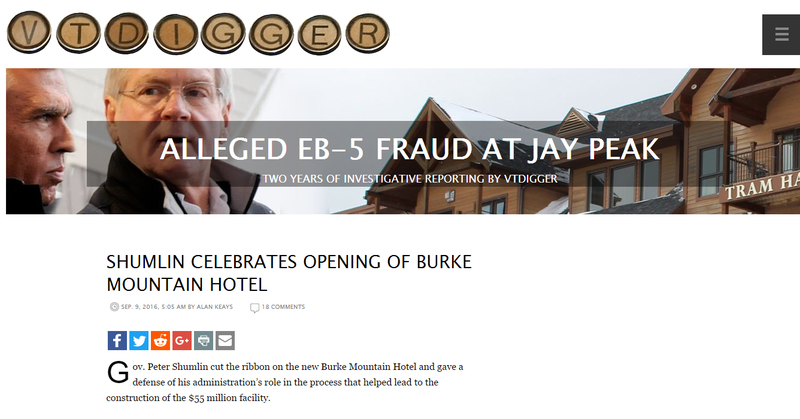 Gov. Peter Shumlin cut the ribbon on the new Burke Mountain Hotel and gave a defense of his administration’s role in the process that helped lead to the construction of the $55 million facility.

“As governor who is leaving office soon in the months ahead, I’ve cut a lot of ribbons, I’ve met a lot of great Vermonters,” said Shumlin, who is not seeking re-election to a fourth term.

“I’ve yet to cut a ribbon as exciting as this one, one where we have bled, shed more tears, worked harder, taken more heat,” the governor added, “but together gotten it done.”

Shumlin delivered his remarks outside the hotel’s doors and in full view of Burke Mountain to the more than 200 people gathered for the hotel’s grand opening ceremony late Thursday morning.

Moments later, with many of those in attendance standing alongside and behind him, the governor used oversized scissors to snip the red ribbon and declare the facility officially open for business.

Many of the speeches touched on the hardships of getting to the point of the grand opening, but stressed gratitude and appreciation for those who helped to see the project through, helping to make Burke Mountain a four-season resort.

“Where others see insecurity, the Friends of Burke Mountain see opportunity,” Sher said. “Today, with the opening of this hotel, we see the next step in putting years of uncertainty surrounding Burke behind us.”

“There’s been a lot of blood, sweat and tears in this mountain, a bit of a suspension of reality, a long strange trip,” Mack said. “We’re excited to move forward. … We’re not looking at the recent past as prologue. We’re looking at the future as being our future and we own it.”

Getting to Thursday’s opening ceremony had not been easy.

The hotel had originally been slated to open in December, but the project became mired in a dispute between the developers, a contractor and the state, and it remained closed after it was completed in January. At the end of March, 180 employees at Burke were laid off.

In April, the state and Securities and Exchange Commission leveled fraud charges against Ariel Quiros and Bill Stenger, the developers of Burke Mountain Hotel, Jay Peak Resort and a biomedical center in downtown Newport.

The state and federal lawsuits allege that Stenger, CEO and president of Jay Peak, and Quiros, owner of Q Resorts, a holding company that includes Jay Peak, misused $200 million in funding from immigrant investors.

In the federal EB-5 visa program, investors put up at least $500,000, along with a $50,000 administrative fee. In exchange, if each investment created 10 jobs, the investor became eligible for U.S. residency.

For eight projects, six of which are at Jay Peak, Stenger and Quiros received $440 million in funds and fees from EB-5 investors.

Michael Goldberg, the SEC receiver for commercial properties in Vermont owned by Quiros, said shortly after he took control of the Burke Mountain property that the hotel would open in November. In the weeks following the court seizure of Burke, Goldberg and Leisure Hotel Resorts “de-Qued” the resort, eliminating signage festooned with Qs. Quiros renamed the mountain “Q Burke” when he bought the ski area for $7 million in 2013, allegedly with immigrant investor funds.

Preparations for the opening moved faster than anticipated, Goldberg said. The hotel was operational several weekends in late August as part of a soft opening with the grand opening taking place Thursday.

“When we learned and were doing an investigation into the allegations that we are all so familiar with, this hotel was already under construction,” Shumlin said after the ribbon was cut. “A decision had to made, what’s best for jobs, what’s best for this mountain’s future, what’s best for the investor in light of what we were all discovering.”

The governor added, “We made the decision to very carefully put in place a system to continue to sign up investors while the investigation continued … I want to thank my team for their courage for taking incoming fire and doing the right thing.”

The contractor and subcontractors are still owed for work on the project.

Jerry Davis of PeakCM said last month more than $4 million was still owed to his company for subcontractors and construction management fees for the hotel project after the property was seized by the SEC in April.

Goldberg has asked the federal court in Miami that is hearing the SEC case to consider $3.6 million in liens filed by subcontractors.

“We will get them paid, a significant portion, hopefully within the next 60 to 90 days, and then we will move thereafter as we sell other assets to get them paid,” Goldberg said Thursday. “We owe a lot of money, but we’re going to get them all paid and this will be one of the few cases that will pay 100 cents on the dollar.”

Goldberg said that while some people may blame state government or others for the financial problem, the real blame rests with Quiros.

“Stenger did not line his pockets at all with this … The bulk of the money that was diverted funneled down to Quiros’ controlled accounts,” Goldberg said. “The forensic reporting indicates that the money flowed to Quiros and not to Stenger.”

Stenger last week reached to a settlement with the SEC to resolve his case. As part of the settlement, he’s agreed to cooperate with investigators and may face a civil penalty.

The newly opened hotel is one of the assets that will eventually be sold to pay off those owed money.

“We’re going to do an organized sales process,” Goldberg said. “My best guess is we’ll start a sales process sometime in the late winter or early spring and hopefully we’ll conclude something next summer.”

Goldberg declined to place an exact value on the hotel, but added, “I can tell you there’s $66 million into the property.”

The SEC case against Quiros remains pending, as does the state lawsuit against both Quiros and Stenger.

“You’re going to have a tough time getting a fraudulent EB-5 project past the state of Vermont at this point,” Shumlin said to reporters after the ceremony.

“I would say to future investors that because of the extraordinary painful process that we’ve been through we’re probably a safer bet than most other EB-5 projects in America,” he added. “We got burned once, we won’t get burned twice.”