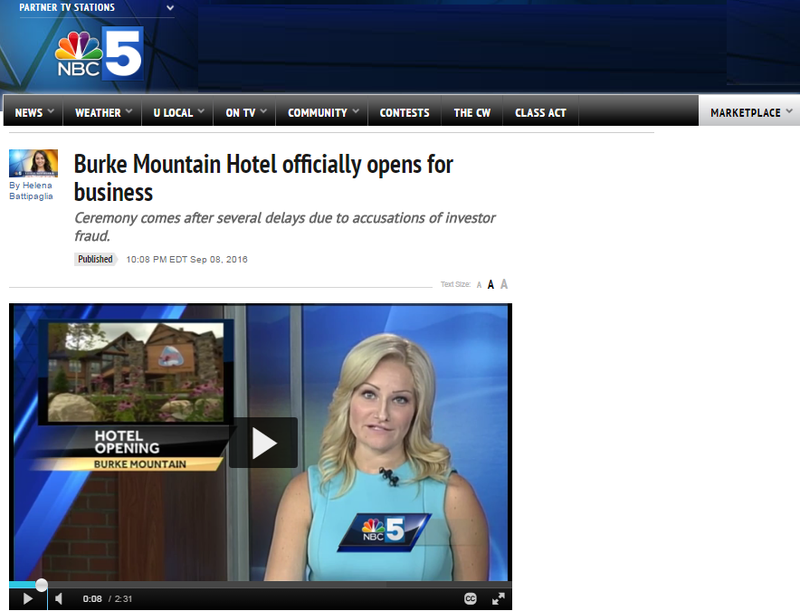 One of the projects at the center of an EB-5 investigation is officially open for business.

Gov. Peter Shumlin, community members and hotel staff were among those who attended the Burke Mountain Hotel and Conference Center ribbon-cutting.  While addressing the crowd, Shumlin called it the most exciting ribbon-cutting he's done as governor.

“We have bled, shed more tears, worked harder, have taken more heat, but together gotten it done,” Shumlin said.

The ceremony comes after nearly a year of delays.  Developers were accused of misusing EB-5 money given by foreign investors to create the hotel.

But now, Shumlin stressed it’s time to focus on the positives.

“A future for hundreds and hundreds of jobs that would not be here if it were not for this great development,” Shumlin said.  “There are now 200 more folks staying in Orleans County because of these jobs.

Ford Hubbard owns a farm just a few miles away from the mountain, and said getting people to stay for more than a day or two has been an issue in the past

He said he’s hopeful for the future of the resort.

“It's a step forward, I'm glad to see that it is opening,” Hubbard said.  “There's been a lot of promises, and because of problems nobody could control it didn't happen.  But now it’s happened."