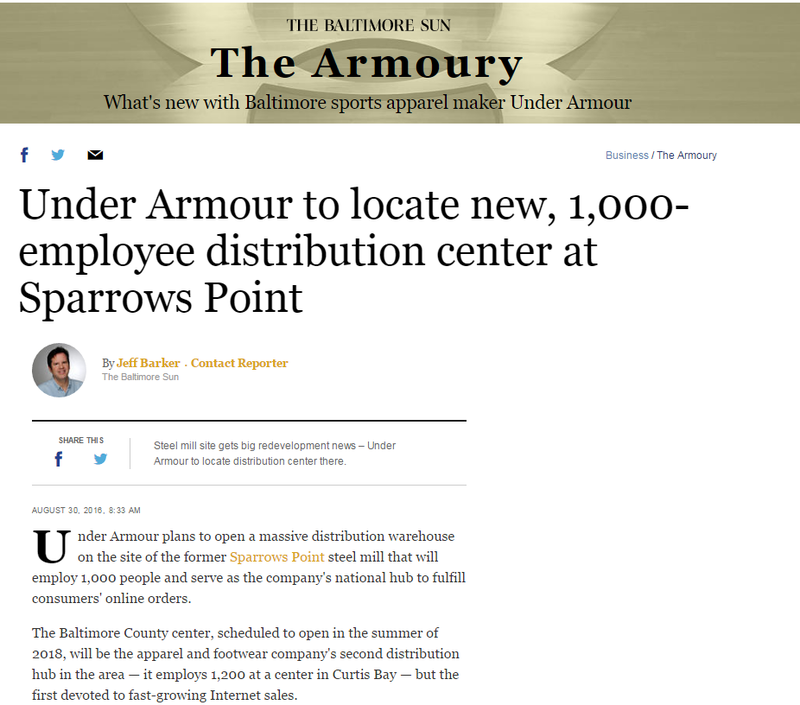 Under Armour plans to open a massive distribution warehouse on the site of the former Sparrows Point steel mill that will employ 1,000 people and serve as the company's national hub to fulfill consumers' online orders.

The Baltimore County center, scheduled to open in the summer of 2018, will be the apparel and footwear company's second distribution hub in the area — it employs 1,200 at a center in Curtis Bay — but the first devoted to fast-growing Internet sales.

The Sparrows Point peninsula location — used by Bethlehem Steel for more than a century — was selected over sites in Tennessee, Indiana and Ohio, said Neil Jurgens, Under Armour's vice president of corporate real estate. In addition to Curtis Bay, Under Armour maintains distribution centers in Mount Juliet, Tenn., and Rialto, Calif.

Under Armour, which employees nearly 14,000 people internationally, liked the Sparrows Point site partly because of its proximity to its headquarters and the Curtis Bay warehouse.

"Labor force and logistics were very strong and we had a very strong desire to maintain the jobs here in Maryland," Jurgens said. "Also, we have the ability to grow in that location."

At 1.3 million square feet, the Under Armour online order fulfillment center will be larger than the 1 million-square-foot Amazon distribution center built on the Baltimore site of the former General Motors plant.

The building is to be constructed in an area of Sparrows Point that is visible from Interstate 695 and was once dominated by steel finishing mills. Jurgens said the formerly blue-collar setting suits Under Armour's culture.

"There's that history of Bethlehem Steel. There is brick and stone and wood and steel," he said. "It's the underdog mentality — hungry and humble — and our spaces reflect that."

The Under Armour site is being developed from scratch by Tradepoint Atlantic, a joint venture of the local firm Redwood Capital Investments and the Chicago-based liquidation and redevelopment firm Hilco. Formerly known as Sparrows Point Terminal, Tradepoint bought the shuttered steel mill for $110 million in 2014 with the goal of transforming it into a campus of port, logistics and light-manufacturing uses.

An Under Armour rendering depicts a long building, low and flat, with Under Armour's logo prominently displayed in red. The company declined to disclose terms of its development agreement and multiyear lease with Tradepoint.

Sparrows Point was selected by Under Armour "for many of the same reasons why the site was once home to the world's largest integrated steel mill," said Eric Gilbert, Tradepoint's executive vice president of development. He said those reasons include a strong labor force, the deep-water port and a "robust" rail and highway network.

The state and county figured prominently in Under Armour's site decision by helping with costs.

The state Department of Commerce said Monday it has approved a $2 million conditional loan through the Maryland Economic Development Assistance Authority and Fund. It said it will fund an additional $2 million in property and infrastructure improvements through the Maryland Economic Development Corp. Under Armour is also eligible for various tax credits.

"Under Armour is a true Maryland success story, and this new e-commerce center is another way they are showing their commitment to our state and to the Baltimore region," Gov. Larry Hogan said in a statement. "As a pivotal new tenant at Tradepoint Atlantic, Under Armour will play a big part in this site's resurgence to a center of economic activity and trade."

Baltimore County would contribute a $200,000 grant, subject to the council's approval. County Executive Kevin B. Kamenetz said he began to look at options for redeveloping the site years ago. After a series of ownership changes, the mill was closed for good in 2012 when its then-owner, RG Steel, went bankrupt.

The county's vision, Kamenetz said, is "bringing 10,000 jobs back to Sparrows Point."

Under Armour will join FedEx Ground and Pasha Automotive as tenants of Tradepoint Atlantic, a 3,100-acre site.

"A company the caliber of Under Armour coming to Sparrows Point continues to show the potential of the immense opportunity we have there," said County Councilman Todd Crandell, a Dundalk Republican.

Jurgens said Under Armour expects to hire workers "from Baltimore City, Baltimore County, Anne Arundel County and probably Harford County as well. In Cecil County there is some of that talent there as well, but we struggle with whether they'd want to drive that far."

Distribution centers link factories to stores and consumers. Nearly two-thirds of Under Armour's products are manufactured in China, Jordan, Vietnam and Indonesia.

At distribution centers, trucks are unloaded and products sorted and moved to modules where orders are filled. Under Armour said 300 to 400 e-commerce workers from Curtis Bay will be transferred to Sparrows Point so that the handling of online orders can be consolidated at one site. The company also said it will hire more employees to replenish Curtis Bay's workforce.

Under Armour employs 2,100 people at its headquarters in Baltimore, plus the 1,200 in Curtis Bay. It has launched an initiative to bring production closer to where the brand's products are sold — a plan that began taking shape this summer with the opening of UA Lighthouse, the company's new manufacturing and design center in Port Covington.

Under Armour sells 67 percent of its products wholesale, according to its 2015 annual report. But so-called "direct to consumer" sales — which include online purchases and sales at Under Armour brand houses and outlets — have been growing.

The company said Monday that its e-commerce business rose 44 percent in this year's second quarter. Precise sales figures were unavailable.

The new distribution center will feature high-tech systems "to enhance Under Armour's product distribution to its expanding consumer base through its e-commerce business," the company said in a statement.