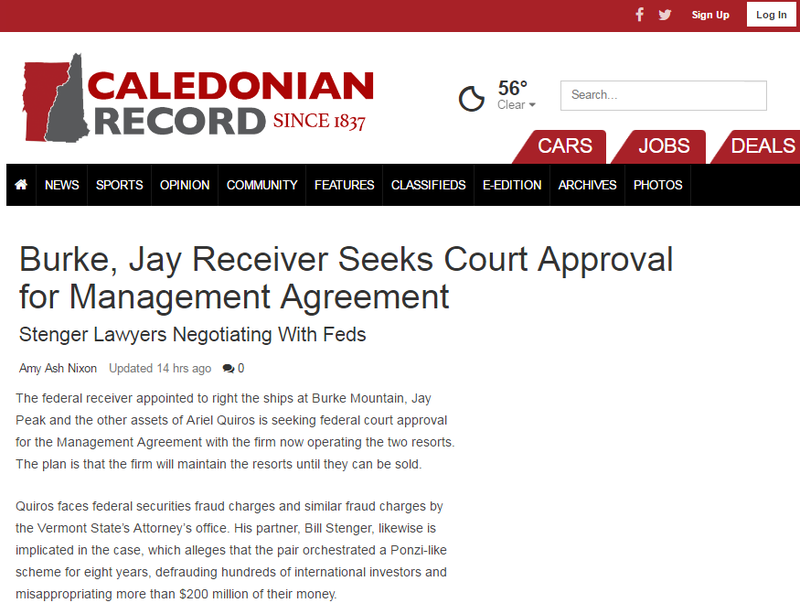 The federal receiver appointed to right the ships at Burke Mountain, Jay Peak and the other assets of Ariel Quiros is seeking federal court approval for the Management Agreement with the firm now operating the two resorts. The plan is that the firm will maintain the resorts until they can be sold.

Quiros faces federal securities fraud charges and similar fraud charges by the Vermont State’s Attorney’s office. His partner, Bill Stenger, likewise is implicated in the case, which alleges that the pair orchestrated a Ponzi-like scheme for eight years, defrauding hundreds of international investors and misappropriating more than $200 million of their money.

The EB-5 immigrant investment program was relied on to fuel the ambitious Northeast Kingdom Economic Development Initiative the pair embarked on in 2008; investors made $500,000 investments in exchange for permanent green cards once jobs were created by the projects promised by Quiros and Stenger.

Quiros is further charged by officials with skimming more than $50 million more off the investors’ money for personal use, including lavish spending that included the purchase of two New York City condos, one at Trump Place.

The management company Goldberg now seeks authorization from the U.S. District Court to enter into has been on the ground at both Burke and Jay since early April, when Securities Exchange Commission authorities stormed both properties, changing locks of the administrative offices on the eve of the federal and state cases being announced during a packed press conference in Gov. Peter Shumlin’s office at the Vermont Statehouse.

Goldberg in recent days filed a Motion for Authorization to Enter and for Approval of the Management Agreement in U.S. District Court in Miami, Florida.

Goldberg is seeking permission for the long-term contract because the litigation in the complex case is expected to last several years. There are seven partnerships, more than $350 million in investor funds, immigration status concerns for some 400 of the total 700 investors, and much more.

“A management company is critical to operation and preservation of the Receivership Entities’ assets, which includes a ski resort and related operations,” he stated in the motion. “The hiring and retention of a management company is specifically authorized in the Receivership Order,” the court earlier issued in the case. Goldberg, he stated, has negotiated a detailed management agreement “…to provide protection” of the asset properties. “Accordingly, the Court should authorize and approve the Management Agreement,” he wrote.

The company brought in to manage the asset properties is Leisure Hotels & Resorts.

The management fee negotiated by Goldberg is 2.5 percent of all gross receipts, and a minimum fee of $45,000 for each month , along with an additional $9,000 monthly accounting fees. “The receiver has confirmed that the fees identified in the Management Agreement are consistent with those regularly charged in the industry,” Goldberg’s recent filing with the U.S. District Court noted.

The attorneys for Bill Stenger recently sought their second extension for his legal team’s response to the SEC amended complaint in the overall fraud allegations case, according to a recent filing in U.S. District Court in Miami.

The court granted the motion, the record shows, and Stenger’s team will now have up until Aug. 19 to respond to the SEC amended complaint.

According to the recent filing, Stenger is in “the midst of serious, detailed settlement discussions,” with the SEC.

By continuing his response to the SEC’s amended complaint in the case, Stenger will preserve his right to “continue these settlement discussions,” the filing notes.

Stenger, contacted by the newspaper on Friday afternoon, asking for comment in his settlement discussions with the SEC, responded that he would like to speak to the issue, “but can’t just yet.”