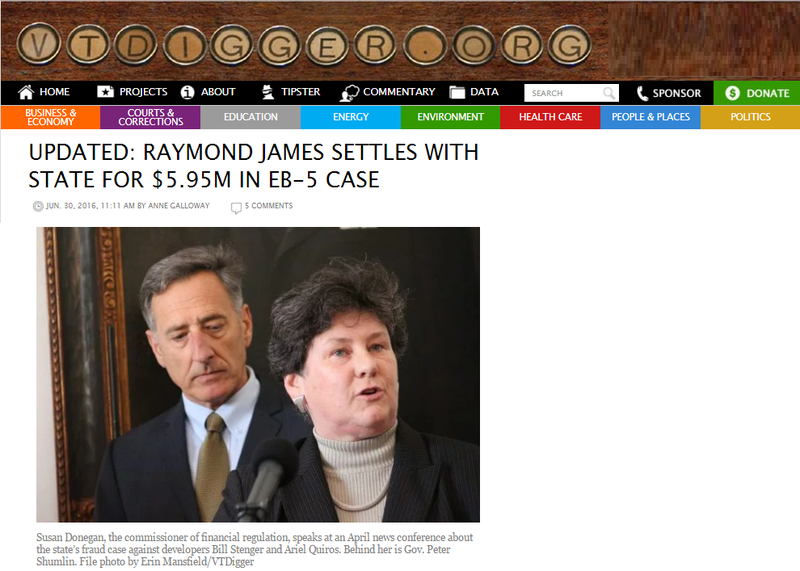 The state has reached a $5.95 million settlement with Raymond James and Associates Inc., a securities broker-dealer based in Florida with branches in Vermont.

Of that amount, $4.5 million will be used to reimburse investors who lost money in the Jay Peak scandal involving the EB-5 visa program.

Susan Donegan, the commissioner of the Vermont Department of Financial Regulation, made the announcement Thursday. The department found “multiple instances of noncompliance” with Vermont law and supervisory requirements, according to a news release.

“DFR’s responsibility is to ensure that Vermont’s securities laws are followed and that investors are protected,” Donegan said. “Since the SEC’s seizure of the Jay Peak-related EB-5 projects, investors have been rightly concerned about possible recovery of funds. This settlement contributes to their restitution.”

Raymond James did not admit or deny the department’s allegations but agreed to the payout and the terms of the administrative consent order that is part of the settlement.

The financial services company has been implicated in the misuse of $200 million in EB-5 immigrant investor funds as part of what the Securities and Exchange Commission alleges was a fraud scheme perpetrated by Bill Stenger, former CEO of Jay Peak Resort, and Ariel Quiros, a Miami businessman.

Stenger is accused of making misrepresentations to investors and aiding and abetting the scam; Quiros allegedly stole more than $50 million and used it on tax payments and the purchase of two New York condos and the Burke Mountain and Jay Peak resorts, according to the SEC.

The EB-5 visa program allows immigrant investors to become eligible for permanent U.S. residency in exchange for a $500,000 investment in a federally approved development that creates 10 jobs in an economically depressed area.

On April 14, the Department of Financial Regulation filed a lawsuit two days after the SEC charged Quiros and Stenger in an alleged “Ponzi-like scheme” to defraud more than 700 investors from 72 countries. The state lawsuit, filed in Washington Superior Court, alleged the Jay Peak developers violated Vermont securities laws.

About 400 of the investors have not yet obtained permanent green cards because three of the projects — one at Burke Mountain, the Stateside condos at Jay Peak and AnC Bio Vermont, a planned biomedical facility in Newport — were not completed and did not create jobs under the EB-5 program because the developers allegedly misused the funds and ran out of money.

The resorts and other properties Quiros owns are now under a receivership.

The state filed a regulatory action against Raymond James, in addition to the lawsuit against Quiros and Stenger. Four class action investor lawsuits, including one earlier this month, also have been filed against Raymond James, and Michael Goldberg, the court-appointed receiver, has also sued on behalf of the investors.

The lawsuits allege that Joel Burstein, a broker and the branch manager at a Raymond James branch in Coral Gables, Florida, helped Quiros set up a complex web of financial transactions that were used in the fraud.

Burstein is the former son-in-law of Quiros and had been married to Quiros’ daughter for several years when Quiros first asked him to make a series of transactions in which the Miami businessman used investor funds for the Tram Haus Lodge and Hotel Jay to purchase Jay Peak Resort, according to the SEC.

That transfer of $13 million in investor funds in June 2008 used to purchase the resort marked the beginning of a scheme in which Stenger and Quiros allegedly diverted investor money from future projects to not only backfill the purchase of the resort, but also to pay for cost overruns for the first several projects, authorities say. Eventually a pattern was established that paved the way for Quiros to steal tens of millions of dollars, according to documents and testimony provided by the SEC.

Over a three-year period, Burstein allowed Quiros to borrow $105 million in margin loans against investor funds, according to the SEC. The money was supposed to be retained in escrowed bank accounts held at People’s United Bank. Instead, Stenger wired the money to mirror accounts held by Quiros at Raymond James.

From 2008 to 2014, the financial services company allowed Quiros, in a complicated series of transactions, to put investor money in Treasury bills and then take out margin loans against the federal notes, authorities say. Quiros held at least four margin accounts at Raymond James, according to the Department of Financial Regulation.

Donegan writes that Burstein “knew or should have known certain transfers served no legitimate business purpose and that greater due diligence was appropriate.”

Throughout the eight-year period when Quiros held accounts at Raymond James, the financial services firm prohibited texting with clients. Despite that requirement, Burstein communicated with Quiros by text “without any supervisory approval,” according to DFR.

Raymond James also had “inadequate written supervisory procedures” for collateralization of margin loans, according to the department.

Ultimately, the firm profited from the margin loans, the SEC has said in testimony and documents provided to the U.S. District Court of South Florida in Miami.

Under the settlement with the state, Raymond James has changed its protocol for the supervision of financial advisors/registered associates, improved supervisory procedures for cross-collateralization of multiple margin accounts, and changed documentation of client contact and approvals of letters of authorization.

The settlement announced Thursday is an administrative consent order. The department has regulatory jurisdiction over Raymond James branches in Vermont and holds licenses for the securities firm to operate in the state.

If the company had not settled, Donegan said, her department could have pulled Raymond James’ license to operate in Vermont, even though the alleged violations occurred in Florida.

“If a brokerage firm loses a license in one state, there are big ramifications in other states,” Donegan said.

The commissioner said no Vermont branches or salespeople participated “in any improper activity” in connection with activities subject to DFR’s enforcement action.

The department will receive $200,000 that will go toward the cost of the investigation, and a $1.25 million administrative penalty will be directed to the state general fund.