Six wishes for a healthy Strip, wherever that is 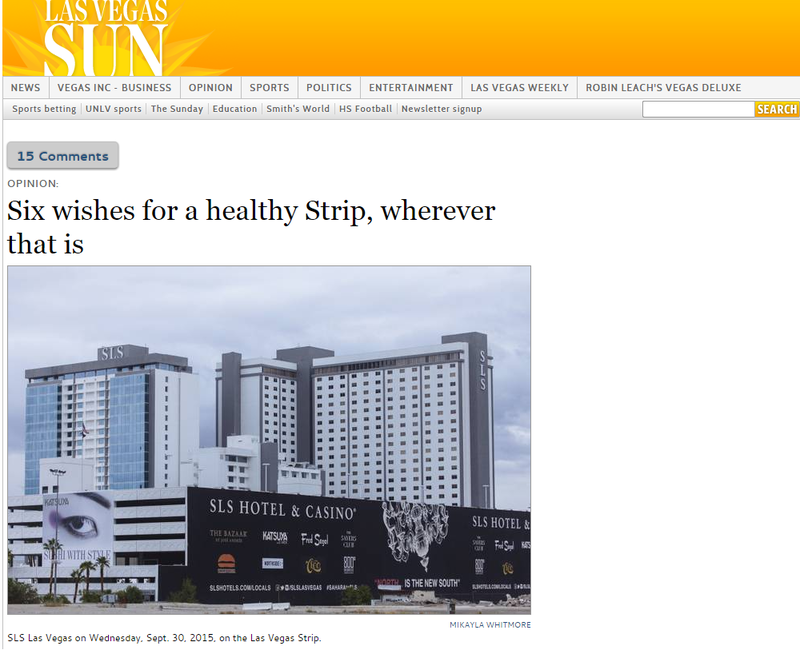 • Cranes at Resorts World Las Vegas. Any sign of progress involving the digging of dirt would be welcome at the site of the proposed $4 billion resort across from Wynn and Encore. A 2018 phased-in opening was announced at the resort’s May groundbreaking.

Aside from work on a parking garage visible from Resorts World Drive, there has been scant activity on the parcel. As a result, execs at neighboring hotels have been curious, and at times restless, to learn the specifics about when the project will begin and end construction.

From SLS President Scott Kreeger in July: “I don’t know what to say” about Resorts World.

From Steve Wynn this month: “I don’t know what (Genting Group CEO) K.T. Lim is thinking, what his attitude is at the moment.”

• A rebound at SLS Las Vegas. The resort hasn’t turned a profit since opening in August 2014.

On the upside, as one rival resort executive said, “No one roots for that place to fail.”

The hotel is doing everything it can to appeal to conventioneers, including launching a partnership with W Las Vegas owner Starwood Hotels and Resorts Worldwide, which took over the SLS Lux tower. The development of Foundry Hall, which replaced Life nightclub, moved SLS out of the high-end club business, and the resort ended its Las Vegas partnership with retailer Fred Segal.

Appealing to locals has been a tricky prospect, as they are notoriously value-conscious and impatient with inconvenience — although just west of the SLS on Sahara Avenue is a model locals casino: Palace Station.

• Hockey in Las Vegas. Businessman Bill Foley and MGM Resorts International officials have done everything they can and everything they have been asked to do to bring an NHL team to the Strip. A pro hockey team not only would boost the city’s sports identity but would alter dramatically its entire entertainment landscape.

A challenge, long term, will surface among all ticketed events in the city. How will 40 dates in a 20,000-seat arena affect ticket sales at the Smith Center for the Performing Arts, the Colosseum at Caesars Palace or for any Cirque du Soleil production?

It’s what we’ll call a high-end concern, but first we need hockey.

• The implosion of the Riviera. That will be a definitive sign that the long-awaited Las Vegas Convention and Visitors Authority expansion is in full swing. The site of the shuttered resort is a dark parcel now.

Many Las Vegas residents have bemoaned destruction of the city’s history. But the $2.3 billion LVCVA complex is the cornerstone of a drive to attract upward of 44 million visitors to the city each year.

• An announced return of Rock in Rio USA and increased activity at the Las Vegas Festival Grounds. Rock in Rio officials have said they hope and plan to return in 2017 to the festival grounds on Las Vegas Boulevard and Sahara Avenue. But Rock in Rio, while a success in staging and artistic performance, lost a bundle of money in its first year — reportedly $22 million to $30 million. That’s a whopper of a loss leader, even when officials expected to absorb some losses and use the first year as a way to market future festivals.

There has not yet been a formal commitment for Rock in Rio in Las Vegas in 2017. I’d like to see that, and an announced list of dates, put on paper next year.

In fact, any widescale event on the MGM Resorts-owned parcel would be welcome. What’s on the books now is the three-day “Party for a Cause,” set for April 1-3, a complementary event to the Academy of Country Music Awards at the MGM Grand Garden Arena. That’s it, for an entire year, on a 52-acre lot built for big events.

• Official boundaries for the Strip. At the moment, life on the Strip seems to end at Circus Circus. But is the official boundary the Stratosphere to the Luxor? Or Sahara Avenue to the Welcome to Fabulous Las Vegas sign? How about SLS to Bali Hai?

The people who represent the officially recognized neighborhood of Summerlin are quick to remind folks of that area’s formal boundaries. If the ’burbs merit that sort of attention, so too should the Strip.