EB-5 Funds Created Jobs, but Workers Were Not Paid 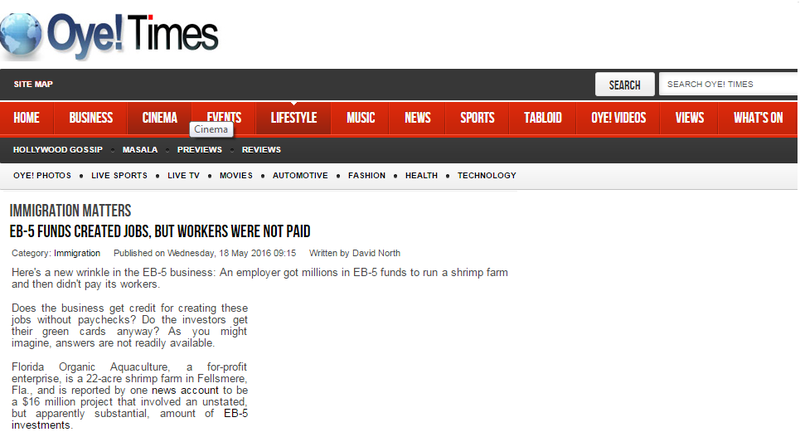 Here's a new wrinkle in the EB-5 business: An employer got millions in EB-5 funds to run a shrimp farm and then didn't pay its workers.

Does the business get credit for creating these jobs without paychecks? Do the investors get their green cards anyway? As you might imagine, answers are not readily available.

Florida Organic Aquaculture, a for-profit enterprise, is a 22-acre shrimp farm in Fellsmere, Fla., and is reported by one news account to be a $16 million project that involved an unstated, but apparently substantial, amount of EB-5 investments.

It is only because of the crusading TV news team at WPBF, the ABC affiliate in Palm Beach, that the workers got any money at all, a partial payment for their work on the shrimp farm, according to the station's report.

Florida Organic Aquaculture's excuse for not paying the workers sounds a little like a "the dog ate my homework" response. Its CEO, Cliff Morris, told the station that an unnamed "foreign investor in the Middle East had tried to wire transfer a large sum, but that the investor's country blocked the transfer."

That suggests that the unnamed Middle Eastern country has really, really tight rules on its banks.

Meanwhile, speaking of mis-used funds and Florida, there's yet another report from yet another corner of the EB-5 cesspool. This is a follow-on to the massive Vermont scandal, involving the apparent theft of $50 million in EB-5 funds by Miami businessman Ariel Quiros.

One of the alien investors in the Vermont projects has hauled Raymond James, the brokerage firm, into federal court in Miami for mismanaging the moneys intended for a medical firm in Northern Vermont. Raymond James, according to a recent SEC filing, allowed Quiros to use margin accounts to stow the EB-5 funds in his possession, an unusual arrangement to say the least.

May the investor's lawyer be at least as successful as the TV news team in providing a little economic justice!