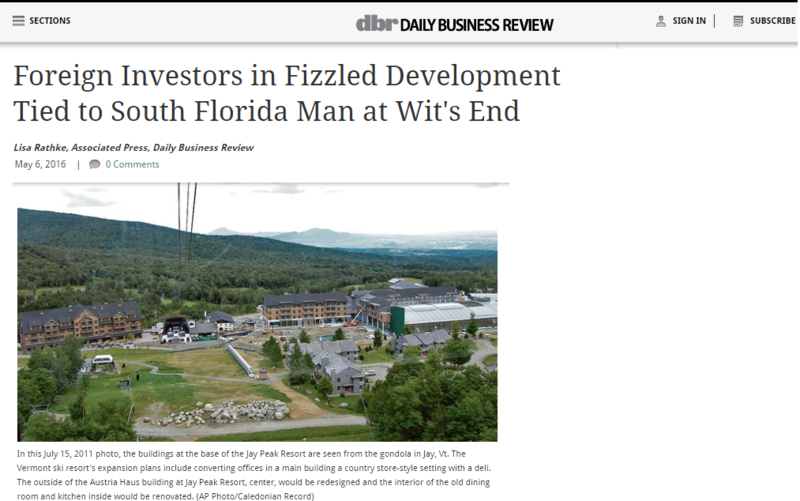 Foreigners who had been banking on their investments in a biomedical research facility and a hotel and rental cottage project in northern Vermont to get green cards are scrambling to find a backup now that the project's developers are accused of misusing hundreds of millions of dollars of investors' money in what investigators called a "massive eight-year fraud scheme."

Wei Wang and his wife, who are from Beijing and living in Houston after graduate school, had hoped their investment of more than $500,000 would lead them down the road to starting a restaurant.

"We were doing our business plans for the restaurant when this came up, so we have to change everything," Wang said. "It's hard to accept that we may lose all of our almost 600K."

Wang said he recently contacted about 30 other Chinese investors, of the 166 foreigners who chipped in a total of about $83 million in the biomedical research project, to see if they might be able to work together to protect their immigration status and money.

The U.S. Securities and Exchange Commission and Vermont last month accused Ariel Quiros, owner of Jay Peak, a large ski resort in the state, and the resort's president of misusing in "Ponzi-like fashion" more than half of nearly $400 million raised from foreign investors for developments through a special visa program. The EB-5 program offers foreign investors a chance at residency for investments in projects that create jobs.

Quiros also is accused in the civil complaints of "pilfering" $50 million of investor funds for his personal use, including to buy the Jay Peak and Burke Mountain ski resorts, a Trump Place luxury condo in New York, and to pay personal income taxes. Both Quiros and Jay Peak president Bill Stenger have said they will be cleared of wrongdoing.

The case is one of several around the country in which the EB-5 program was allegedly used to defraud hundreds of investors out of tens of millions of dollars.

One investor on Tuesday filed a class action lawsuit in Miami against Quiros, Stenger, the Raymond James financial firm and Quiros' then-son-in-law who was working at the firm. The lawsuit is seeking to recover funds the investor says were misused, commingled and stolen.

The status of investor funds related to the litigation ultimately will be decided by the courts, Vermont said. The federal receiver overseeing the projects amid the fraud allegations said he is attempting to protect both the investors' immigration status and the investments.

Five of the eight projects connected to Quiros and Stenger have been completed and are operating, including the Jay Peak Hotel, indoor water park, ice arena and golf course; the Jay Peak Golf and Mountain Suites; and the Jay Peak Lodge and Townhouses.

But the biomedical research plant, which was expected to bring 450 jobs, is unlikely to happen, Democratic Gov. Peter Shumlin said last month.

Federal receiver Michael Goldberg expects both Jay Peak and Burke Mountain resorts, including a new hotel at Burke that has not yet opened, to be sold.

Antonius Van Usen, of Utrecht, the Netherlands, said he had several options, including a life insurance company in Seattle and other commercial ventures, but chose to invest in the Jay Peak hotel and water park in 2008 because the Vermont government was in favor of the project and said it would monitor it, he said.