Smith: Everybody else is at fault 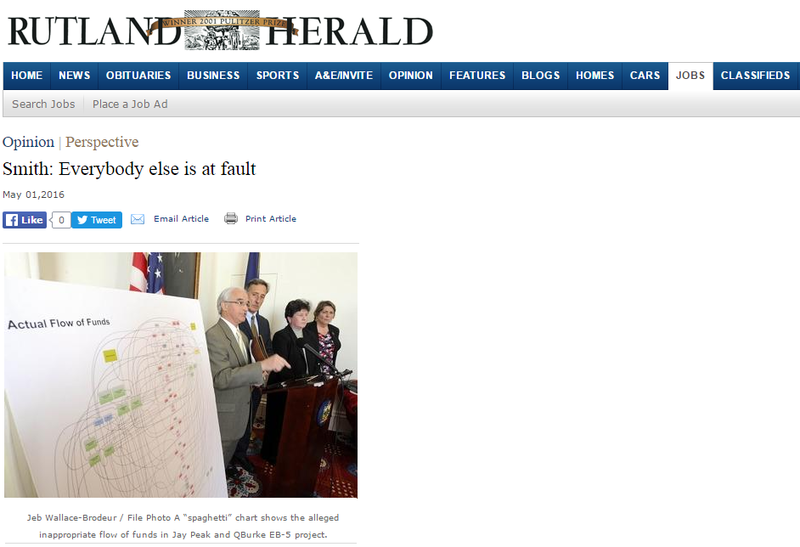 There is a tactic that politicians sometimes use when they are in political hot water. The tactic is to blame others. Frequently, the goal is to cast blame far and wide so no one person is held responsible. Ironically, it’s a tactic we discourage our children from using when they say, “everyone is doing it” as a defense for bad behavior.

Attempting to spread the blame around, and therefore deflect blame, has been on full display as Gov. Peter Shumlin addressed alleged fraud in the EB-5 program.

EB-5 is a federally created program, authorized by Congress and the president to encourage foreigners to invest between $500,000 and $1 million in projects in this country in return for visas to live and work in the United States. The U.S. Securities and Exchange Commission contends that in Vermont, Bill Stenger and Ariel Quiros diverted as much as $200 million of EB-5 investor money from projects to cover the cost of other projects in a Ponzi-like scheme. They also contend that Quiros use some of this diverted money for personal expenses.

In Shumlin’s news conference announcing the complaint filed by the SEC, he went out of his way to mention he inherited the state regulatory system that monitors EB-5 projects from Gov. Jim Douglas. Therefore, it wasn’t his fault. Never mind the fact that Shumlin has been governor for almost 5½ years. Using Shumlin’s logic, Douglas could make the same claim by arguing he inherited a bureaucratic apparatus from Gov. Howard Dean, who could argue he set up the program in accordance with federal legislation that was championed by Sen. Patrick Leahy. Leahy could argue that the executive branch of the federal government mishandled the implementation of the program and that past presidents are at fault. In the end, the governor’s logic doesn’t get us anywhere, because its sole purpose is to diffuse responsibility. Shumlin also points to the investigation his administration eventually started as evidence of his efforts to uncover the truth, but it was reported that his administration’s work began long after the federal government had begun its investigation.

Shumlin is discovering this deflection technique isn’t working. He positioned himself as the champion of the program and jetted across the globe on EB-5 funds, trips that cost in excess of $100,000. He made false claims in promotional materials suggesting Vermont’s state-sponsored program had increased oversight, including an audit, when it did not. And his close political confidant, Alex MacLean, left government service to go work for Stenger, billing herself as head of “investor relations” and the EB-5 project director. Finally, a big problem for the governor is his lack of credibility with the public. A recent survey had his job approval percentage rating in the 30s. It’s one of the lowest ratings of a recent governor.

To be fair, fraudulent transactions, including allegations with the EB-5 program, are covered up by layers of deception. It often takes years to uncover these deceptions. Former Wall Street executive Bernie Madoff, who was convicted of stock and securities fraud in 2009, started his Ponzi scheme in the early 1990s.

However, in this particular case, there were very public warning signs beginning in February 2012 that something was amiss — signs the Shumlin administration chose to ignore. A former executive at Jay Peak said publicly he no longer had faith in the financial representations Stenger and Quiros were making about their projects. Yet state officials dismissed those concerns and continued to travel on EB-5 money to promote Stenger’s and Quiros’ projects. And later Shumlin’s spokespeople publicly berated VTDigger.org publisher Anne Galloway for reporting on problems in the program.

Why were these public warning signs ignored? The answer to this question is the only way to learn valuable lessons from this mess. Perhaps the release of emails and other documents will provide much needed insight.

Did influence of the former Shumlin campaign manager and senior staffer, MacLean, who later went to work for Stenger, obscure the administration’s view or influence its actions? Were political contributions a factor because we now know more than $70,000 went to Shumlin and the Democratic Party during this time? Did the administration ignore concerns from its own regulators? Or was the administration just hoodwinked, like everyone else?

Even if the Shumlin administration acted in good faith, the governor’s diminished standing with most Vermonters — the result of his previous actions — has made it difficult for him to make his case.

Just last week, a judge sided with WCAX-TV that a nearly $4,000 expense of a privately chauffeured limousine service in addition to a rental car for the governor’s two-day trip to Paris last December is indeed public information. The judge agreed it shouldn’t be hidden under the guise of security, as the governor’s office had wanted. Trying to hide these costs, and then insisting the total trip costs were only $1,251, erodes the governor’s credibility and undermines his early claims he would be the “transparency governor.”

But this attempt to hide limousine costs is only one of many events that have led Vermonters to question the veracity of their governor. How he handled the East Montpelier land transaction with his neighbor, Jeremy Dodge, left many questioning why the governor took advantage of a vulnerable Vermonter. Waiting until after his re-election in 2014 to release an honest cost assessment of his single-payer health care plan infuriated Vermonters because they felt deceived.

Repeatedly downplaying the problems with, and cost of, Vermont Health Connect also eroded confidence in him. And knowingly disclosing only half of the impact of a large payroll tax proposal in a budget speech came across as disingenuous. These events, and others, have taken their toll on the governor’s credibility.

Once you lose credibility, you lose trust. As a parent would say to their child: Restoring trust begins when you take responsibility for your choices and actions. So far in describing its role in this EB-5 scandal, we have seen an administration doing everything possible to avoid responsibility.

Mike Smith was the secretary of administration and secretary of human services under former Gov. Jim Douglas. He is the host of the radio program, “Open Mike with Mike Smith,” on WDEV 550 AM and 96.1, 96.5 and 101.9 FM. He is also a political analyst for WCAX-TV and WVMT radio and is a regular contributor to The Times Argus and Rutland Herald.