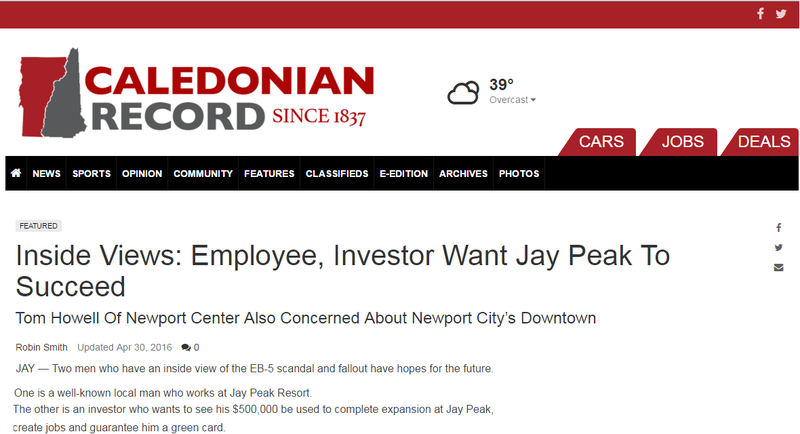 Two men who have an inside view of the EB-5 scandal and fallout have hopes for the future.

One is a well-known local man who works at Jay Peak Resort.

The other is an investor who wants to see his $500,000 be used to complete expansion at Jay Peak, create jobs and guarantee him a green card.

Both reacted this week to the fallout from the lawsuits against Bill Stenger of Newport City and his partner Ariel Quiros and their Northeast Kingdom Economic Development Initiative. Stenger is accused of facilitating Quiros’ misuse of $200 million in EB-5 foreign investments and fraudulent use of $50 million. Quiros and Stenger have denied the complaints filed in U.S. District Court by the U.S. Securities and Exchange Commission.

Quiros is trying to get money out of the projects, while Stenger is working with the management company that was named to run the resorts.

Tom Howell retired after years of negotiating with hostage takers for the Vermont State Police and became director of security at the mountain.

He was one of several dozen employees who sat through the press conference on Wednesday at the resort’s main ball room, listening to Vermont Gov. Peter Shumlin and court-appointed receiver Michael Goldberg reassure them and reporters that Jay Peak and Q Burke have enough money to continue to operate.

They had a private meeting with Shumlin and Goldberg before the press conference, and heard the same reassurance about their jobs and the resort’s viability, Howell said.

But Howell said he had a larger view that concerned him.

“What’s most important to me is that the state team is meeting with the folks in Newport and (Mayor) Paul Monette, about the downtown project and AnC Bio (site),” Howell said.

“I live in Newport Center. It’s the Kingdom. We’re all one here.

“What happens at Jay Peak affects those people in Newport and visa versa. It’s important to all of us.”

As for his position as an employee at Jay Peak, Howell admitted that he and most others working at the resort were “a little bit overwhelmed by the negative press” that came out of court filings last week when Goldberg tried to stop the court from giving Quiros access to any of the funds that Goldberg said were needed for operations. Goldberg on Wednesday said he has since learned that there are plenty of operating funds to tap until next ski season.

“It was refreshing to sit down and hear the facts from Michael Goldberg and the Leisure (Hotels and Resorts) folks and the governor,” Howell said.

“Nothing is changed for us. We’ve still got a lot of business coming up,” he said.

As an employee, he said that you would not even know that anything had changed about the resort ownership.

“If you are just a regular employee it’s just business as usual. We have a great facility here, a great staff and we’ll keep going,” Howell said.

For investor Felipe Vieiri, living in Stowe, his hope is that the resort does very well. And he wants the incomplete developments begun by Stenger and Quiros to be completed with EB-5 funds already in hand and with more EB-5 investments.

He is concerned that the U.S. Customs and Immigration will see that his investment of $500,000 was used to create at least 10 direct and indirect jobs. If the townhouses, condos and recreation and medical centers at State Side are not finished, he wonders if that will happen.

He wants to keep it going “so we will be attached to the job generation. So we can pledge to the USCIC that our green card is preserved,” Vieiri said.

He sold property to create the $500,000 to invest in the NEK project and cannot invest more. But he said he would if he could to ensure his green card.

Keeping the resorts running “that’s the most important part for us. So we don’t see our investment being sold very cheap,” he said.

Vieira said he has seen a small return on his investment, $3,500, but is most concerned about the green card.