After $200M+ in Fraud Allegations, what's Next for Vt. Ski Resorts? 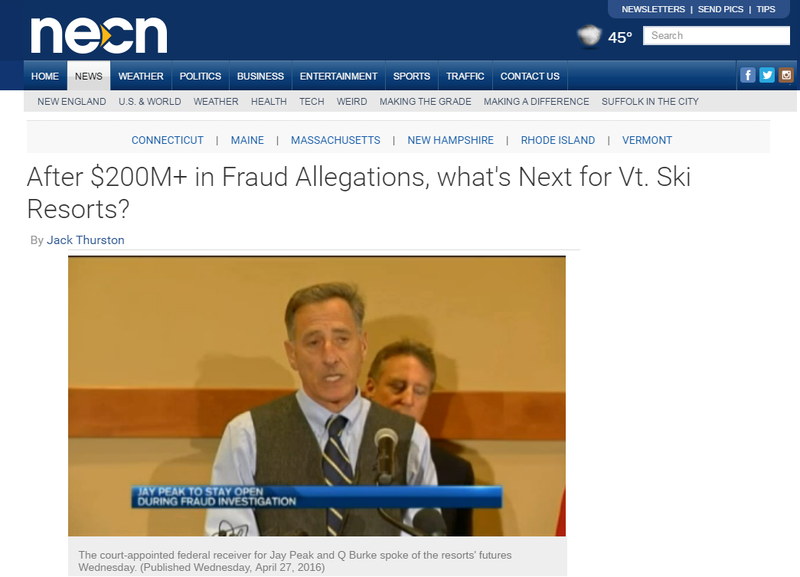 The lawyer a federal judge appointed to run two Vermont ski resorts said Wednesday that he has the funds to continue operating Jay Peak, during an ongoing investigation into allegations of large-scale investment fraud.

"It's business as usual," said Michael Goldberg, the federal receiver for both Jay Peak and Q Burke Resort, describing Jay. "This is an important part of this area, and it will stay and remain operational."

Jay Peak and Q Burke have been under a cloud of uncertainty for two weeks, since allegations of a Ponzi-like scheme by developers Bill Stenger and Ari Quiros. The businessmen were accused in state and federal civil lawsuits of misusing more than $200-million in investor money.

The suits alleged Quiros even used some of that money to improperly purchase Jay Peak, pay his personal taxes, and buy himself a New York City luxury condo. The businessman blasted those claims as "demonstrably false" in a court filing from his legal team.

"It was definitely shocking," Jay Peak employee Steve Wright said of the allegations against the developers.

Wright and hundreds of other resort employees were assured Wednesday that the court-assigned managers secured millions in capital to buoy Jay's operations until the winter, when cash flow and profits should really pick up. Goldberg said a strong winter in the 2016-2017 ski season would further strengthen Jay Peak’s business operations.

Goldberg said Jay Peak employs 5-600 people in the off-season, and 1,200-1,300 in the critical winter season. Q Burke offers fewer summertime activities than Jay Peak, but the Associated Press reported the management company does intend to open Q Burke as planned for mountain biking this summer.

The projects were funded through EB-5, a federal program that gives foreign investors a green card if their money creates employment in rural, job-hungry regions of the United States. But with some projects at Jay incomplete, including work to construct residential cottages, some of those foreign investors are really starting to worry about their immigration status.

"Everybody is scared to death," said Felipe Vieira, an EB-5 investor who told reporters Wednesday he put $500,000 into Stenger and Quiros's projects.

Now living in Stowe, the native of Brazil said he was banking on EB-5 for permanent U.S. residency, so he hopes those jobs do come through.

"Whenever it works fine, it's great," Vieira said of EB-5, explaining he still does believe in the investment incentive program, despite the current concerns about it in Vermont's Northeast Kingdom. "[But] they need to put some kind of controls in place to prevent what's happening now."

Sen. Patrick Leahy, D-Vermont, who long championed EB-5 as a job creation tool, has said Congress must reform the program to stamp out opportunities for fraud or misuse. If that doesn't happen, Leahy has said he will not vote to reauthorize the program.

Goldberg and Shumlin said the foreign investors' concerns over job creation, which is integral to their residency status, makes this receivership different than many others. They said many investors have expressed to them that they want to see Kingdom projects successfully completed, instead of simply cashing out and liquidating assets, which Goldberg said is typical of many other court-appointed takeovers he has worked on.

As for Q Burke, where the Q stands for accused fraudster Quiros, Goldberg said he plans to drop that initial from the resort's name, open a long-delayed hotel there this fall, and eventually, sell both Burke and Jay Peak. Authorization to take certain major steps such as selling Q Burke would have to come from the court, Goldberg explained.

"This could be our busiest summer ever, in terms of traffic and revenues," Wright told necn. "We think it'll be a great summer here."