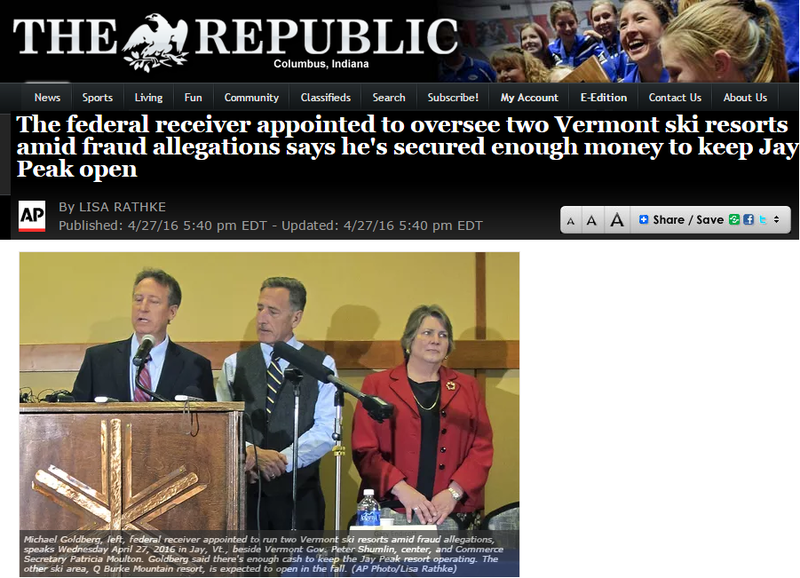 Michael Goldberg met with Jay Peak employees Wednesday, nearly two weeks after the federal Securities and Exchange Commission and the state accused the resort's owner and president of fraud.

"It's business as usual. It's actually better than usual because the management company ... is going through and making the operations more efficient, and we expect that the hotel will thrive. The only thing we're praying for is snow in the winter right now," Goldberg said.

Gov. Peter Shumlin joined him at the meeting with employees.

The resorts' owner, Ariel Quiros, of Miami, and Jay Peak's president, Bill Stenger, of Newport, Vermont, are accused of misusing in "Ponzi-like fashion" more than $200 million of nearly $400 million raised for development through a special visa program. The EB-5 visa program encourages foreigners to invest in U.S. projects that create jobs in exchange for a chance to earn permanent U.S. residency.

Both Quiros and Stenger have said they'll be cleared of wrongdoing.

Their plans included a biomedical research plant, big upgrades at the two resorts and redevelopment of a downtown block in Newport. The bio-tech plant, which was expected to bring 450 jobs, and Renaissance Block are unlikely to happen, leaving a razed block in downtown Newport.

Goldberg and Shumlin have met with the mayor of Newport, and Shumlin said they will work to help find the best use for the property.

Goldberg had filed a court declaration Friday in Miami saying the entities named in the fraud case "have very little cash and numerous upcoming expenses," and if more money is not obtained he would be forced to shut down the operations of Jay Peak and keep the other resort, Q Burke, closed.

Goldberg now says he expects Q Burke and its new hotel to open in the fall. He said the Q will be dropped from the name. He also expects both resorts to be sold eventually. Leisure Hotels and Resorts, the Kansas-based management company that's running Jay Peak and Q Burke while the investigation continues, said it intends to open Q Burke for mountain biking this summer.

In the meantime, Goldberg said he's been contacted by groups representing people who've invested in various development projects in Vermont. He said the investors want to invest more to ensure that the projects are completed, jobs are created and they get their visas.

"They're more concerned in many respects with their getting their EB-5 status than getting their money back," said Goldberg, who said it was too early to say if and how investors might be reimbursed.

One investor, Felipe Vieira, attended the briefing. He said he's concerned whether he'll get permanent residency because the project he invested in — Jay Peak Hotel Suites Stateside — is not complete. He chipped in $500,000 but said he doesn't have any more to invest after selling his farm and an apartment in Brazil.

He said he still supports the EB-5 program as long as controls are in place to prevent fraud.

Shumlin, who like former Republican Gov. Jim Douglas and other top officials promoted the projects, has said he changed the structure of the state's regional EB-5 office so it would have more oversight. That helped investigate the allegations, he said.