‘Business as usual’ at Jay Peak as receiver gets to work 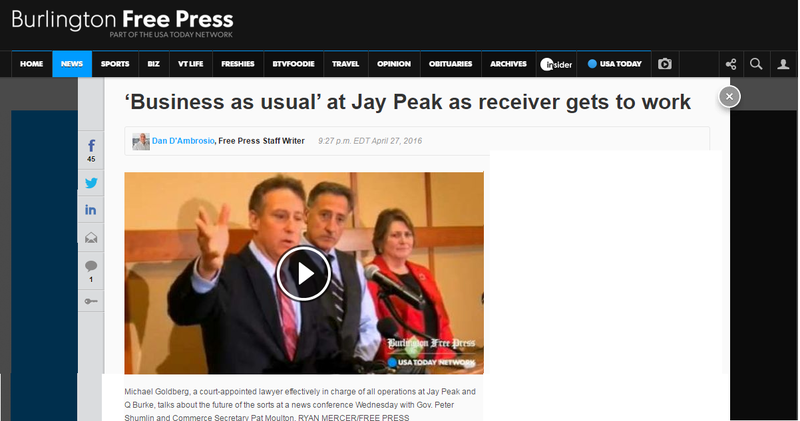 Soon after he arrived in the state two weeks ago, Michael Goldberg ditched his suit in favor of the sweaters and slacks of “Vermont casual.”

Goldberg is the attorney appointed by a federal court in Miami to dig the Northeast Kingdom out of the biggest alleged fraud in its history. He said Wednesday he wanted to fit in as he determines the fate of Jay Peak and Q Burke ski resorts, and two properties in Newport developed by Bill Stenger and Ariel Quiros. Hence, the wardrobe change.

Stenger and Quiros are accused by the U.S. Securities and Exchange Commission of a $200 million “Ponzi-like” scheme in which they diverted money collected from foreign investors in the federal EB-5 program from its intended use for other purposes. In the case of Quiros, the SEC alleges he used $50 million for his personal benefit. Both men deny the charges.

Under EB-5, foreign nationals who invest $500,000 in projects in economically depressed regions of the country have a pathway to U.S. residency if the project creates a required number of jobs. The fraud allegedly perpetrated by Stenger and Quiros totals some $200 million, although Goldberg said he’s still figuring out the extent of it.

Goldberg was wearing a suit again Wednesday as he prepared for a news conference with Gov. Peter Shumlin and Commerce Secretary Pat Moulton on the status of the projects in the Northeast Kingdom.

In an interview before the news conference, Goldberg said that on a scale of 1 to 10, the alleged fraud in the Northeast Kingdom is an “8,” but not the biggest fraud he has worked on. Based in Florida, Goldberg has been involved in receiverships for most of his 26 years as an attorney, working on more than 100 cases and running 25 in the United States and in locales as far-flung as Berlin and Auckland.

Nothing much to show for $83 million

Of all the properties he’s responsible for, Goldberg said AnC Bio, a proposed biomedical research facility in Newport that never got off the ground, is the most difficult. He said Stenger and Quiros raised $83 million from 166 investors for the project, and all but $14 million to $17 million is gone, with nothing much to show for it.

But most of the money was “diverted” to other purposes. The diversion itself is the “misdeed,” Goldberg said.

Without a viable project, it’s difficult to see how the investors in AnC Bio will ever receive the green cards they counted on when investing $500,000 each in the project. Goldberg said he would be surprised if AnC Bio were ever built as intended, but with just two weeks on the job, he doesn’t know enough yet to say what might happen.

Goldberg said he would be exploring “all possibilities” to help out the investors in AnC Bio, including credit for jobs created at other projects where the money intended for the biomedical facility was diverted.

Quiros and Stenger had more than 100 accounts at 10 financial institutions. The state produced a “spaghetti map” of the convoluted transactions among the accounts when they announced the alleged fraud on April 14.

The Northeast Kingdom receivership is unique, Goldberg said, because many of the investors have “other than purely financial motivations.” They want the U.S. residency that’s possible with the EB-5 program.

“Many are offering to invest more money to make sure projects are completed to create the jobs required,” he said.

At the other end of the spectrum from AnC Bio is Jay Peak resort, which Goldberg described Wednesday as a “great business” that makes money in the ski season. As he works to find buyers for the properties he’s responsible for, Goldberg said the “whole purpose” will be to create and sustain jobs – for the investors and for the good of the Northeast Kingdom.

To illustrate his point, Goldberg used the $50 million Q Burke Hotel, which he said is finished and ready to sell. He told the Free Press on Monday he already has interest from two high-end hotel chains.

“I wouldn’t sell Burke to someone to use as a private villa, even if the offer was $100 million, the best offer around,” Goldberg said.

That’s because as a private villa, the hotel wouldn’t create the jobs Goldberg wants.

Ultimately, the decision concerning what to do with the properties Goldberg has taken over in the Northeast Kingdom will be up to the judge in Miami federal court.

“I request the court’s permission,” Goldberg said. “Creditors have the ability to voice their opinions.”

By the time he asks permission of the judge, however, Goldberg said he typically has the support of the investors for whatever it is he wants to do.

“I will meet with the creditors and come up with a plan,” he said. “The EB-5 investors are creditors. Everybody from contractors to vendors get to participate in the claims process.”

J.J. Tolland, director of communications at Jay Peak, said Goldberg and a new team of managers told him and others from the “get-go” that it would be “business as usual” at Jay Peak. Tolland left for a long-planned vacation three days after Goldberg and his team descended on the ski resort, and felt confident there would be a job waiting for him when he got back.

“I have a future at Jay Peak, my understanding is all of us have futures at Jay Peak,” Tolland said.

Tolland did admit that April 13 – the day Goldberg took over – was “definitely outside the typical Wednesday operations in the slow season.” Tolland said as far as he knew, no one working at Jay Peak had an inkling of the alleged fraud.

As the Burlington Free Press reported on Monday, Goldberg has tapped Bill Stenger to provide expertise and institutional knowledge as Goldberg works to eventually sell the resort. Tolland said he ran into Stenger Wednesday morning on the Jay Peak “campus.”

“I think it’s a tumultuous time for him,” Tolland said of Stenger. “He’s been here since 1984. To go through this, to have your name trashed basically, having everybody say one thing or another. He lives in a small town.”

Tolland described Stenger as “a great guy to work for.”

Goldberg, too, has been complimentary of Stenger, saying Monday, “I appreciate that even though he has a lawyer, he has not ‘lawyered up’ like other people.”

On Wednesday, Goldberg drew a distinction between Stenger and Quiros, pointing out the latter is going to court in Miami to try to unfreeze his assets.

Goldberg said Stenger “appears remorseful,” and is not “running away and hiding,” but showing up each day to “face his responsibility.”

“I respect that,” he said. “He’s here whenever we need him. He responds within two minutes, all times of the day.”

Goldberg is paying Stenger for his help, under $100,000 on an annualized basis, which is “far less,” he said, than Stenger was making previously.

Goldberg hired the Leisure Group of Companies, based in Prairie Village, Kansas, to run the resorts while he figures out what to do with them.

Gary Endicott, executive vice president and CFO of Leisure Group, said Wednesday he’s also charged with making the operation at Jay Peak more efficient. Endicott said after just two weeks, his team has already found ways to save $1.3 million on an annualized basis at Jay Peak, including putting three K-Cups in each room in the hotel instead of six.

Goldberg points to the reduction in K-Cups as a good example of the attention to detail Leisure Group brings to the job.

The effort to extricate the Northeast Kingdom from the fallout of the alleged fraud by Bill Stenger and Ariel Quiros will be a long one, Goldberg said. He expects to be in court for years to come.