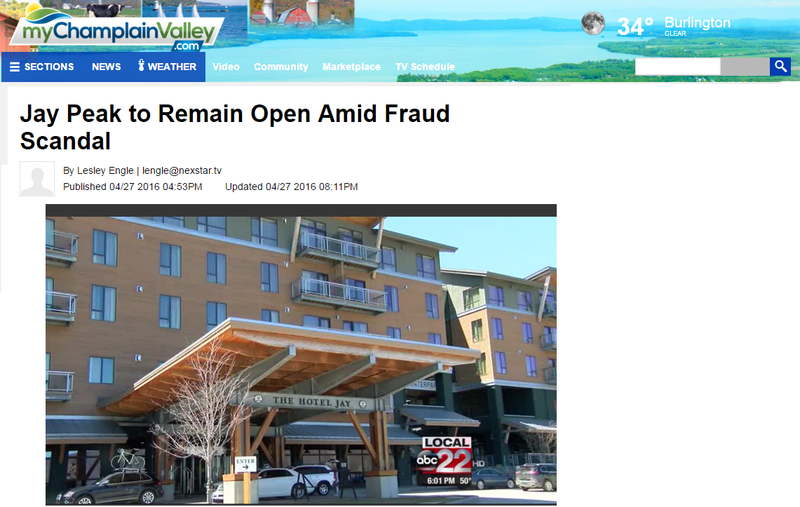 Despite growing concerns Jay Peak will close, the man charged with overseeing the resort’s finances said Wednesday. He has a plan to keep the ski destination open.

During a press conference Wednesday, Michael Goldberg said within the last few days he secured $4.7 million to finance Jay Peak during the off-season, and additional funds are coming.

This is welcome news for both employees and visitors. Just a few days ago Goldberg painted a bleak picture, saying the resort needed millions more to keep it running. Goldberg also said Q Burke will open this year, too.

“I gave a tour to a hotel operating company that wants to possibly purchase the hotel, I expect to have a lot of interest, but regardless of that, the hotel will be open in the fall for the season,” said Goldberg.

Q Burke has been under construction since June 2014.

The US Securities and Exchange Commission filed civil fraud charges earlier this month against Jay Peak, Inc. owners Ariel Quiros and Bill Stenger. The SEC says the two misused more than $200 million of federal EB-5 funds intended for projects in Vermont’s Northeast Kingdom. The EB-5 program helps foreign investors get US residency in exchange for investing in American companies.

Despite the investigation, Goldberg says it's business is usual at Jay Peak.

He along with Governor Peter Shumlin, met with employees at Jay Peak Wednesday. He says no one has lost their job over the alleged fraudulent scheme.

"What we have been doing here since it happened is to instill an air of confidence in our staff and in our line staff that you are going to have a job and we will continue to operate, says Thomas Howell, Director of Security at Jay Peak Resort.

But EB-5 investors are not as optimistic about the future.

"They need to put some kind of controls to prevent what is happening now because everybody is scared to death," says EB-5 investor Felipe Vieira who is in the U.S. on a two year visa.

Like many investors, he poured hundreds of thousands of dollars into re-development projects in hopes of getting a green card if their individual investment generates 10 jobs. Goldberg says several new investors are interested in pouring money into the EB-5 projects in question so they can be completed.

He also says the "Q" in Q Burke will be dropped and the name will go back to Burke Mountain.