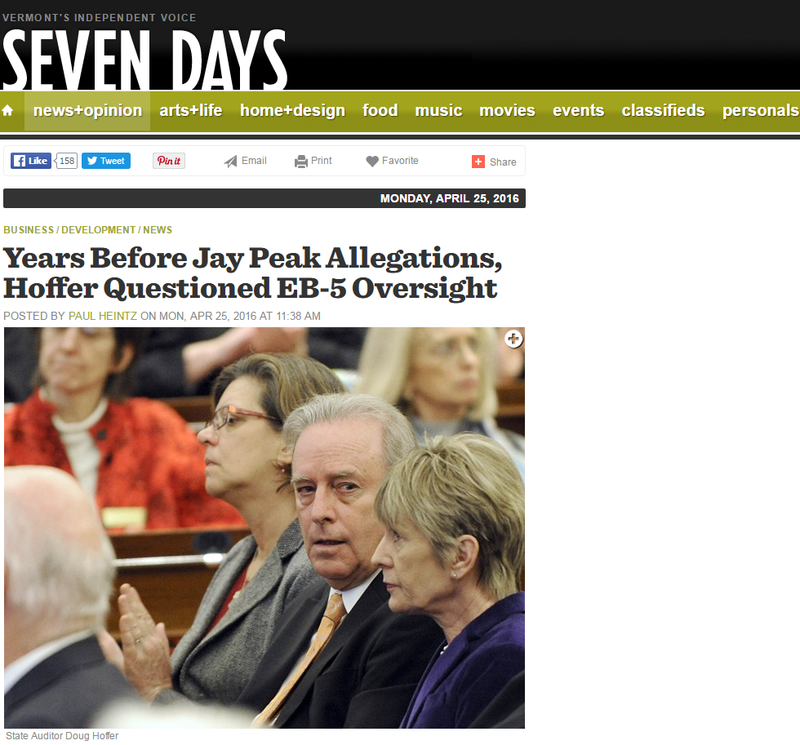 In the week and a half since federal and state authorities accused a pair of Northeast Kingdom developers of massive fraud, some of the state's most powerful politicians have sought to walk back their support for the projects.

But there's one top pol who has little walking-back to do.

Doug Hoffer, the Democratic and Progressive state auditor, has long been critical of the federal EB-5 investor visa program, which the developers used to attract more than $350 million in foreign financing. Under EB-5, those who invest $500,000 in certain economic develop projects are eligible for a green card; if they can later show the investment generated 10 jobs, they and their families can become permanent residents of the U.S.

In a March 2012 interview with Seven Days, most of which was never published, Hoffer questioned the program's moral underpinnings, its economic utility and its oversight structure. At the time, he called EB-5 "offensive on some levels" because it allows those with means to bypass the nation's restrictive immigration procedures.

“It’s a policy that rewards wealth with citizenship,” he said. “They don’t need to wait in line like everybody else.”

Unlike EB-5's greatest champions, such as Sen. Patrick Leahy (D-Vt.), Gov. Peter Shumlin and former governor Jim Douglas, Hoffer was not serving in public office when he made those remarks, so he faced less pressure to support projects that promised to bring jobs to the economically struggling Northeast Kingdom.

"We all had huge enthusiasm for this effort, and anyone who tries to rewrite history on that is just not being truthful," Shumlin told the Burlington Free Press last week. "You cannot and should not run from the fact that this was viewed by any reasonable person as a real opportunity for Vermont."

When the March 2012 interview took place, Hoffer had already lost a race for state auditor in 2010, and he would not win statewide office until later that fall. But as a freelance economic analyst, he had spent some time looking into the EB-5 program.

Hoffer questioned at the time whether each half-a-million-dollar investment was really creating 10 jobs — and, if so, whether those were decent paying and enduring jobs. Federal EB-5 rules require only that investors provide an econometric analysis showing that such projects were likely to generate 10 direct or indirect jobs, including temporary ones.

"I don't want to hear how great the program is until you can demonstrate it's creating good jobs," he said.

Hoffer also wondered whether economically sound projects really needed to rely on such an esoteric form of financing.

"If you have a good business plan, you can find the money," he said. "Are there no alternatives to Sugarbush and Jay Peak and these other guys?"

Asked at the time whether he thought the Northeast Kingdom developers, Ariel Quiros and Bill Stenger, had concocted an elaborate Ponzi scheme, as some had alleged even back then, Hoffer said he wasn't sure. But he said he was certain that state and federal oversight of the program was insufficient.

"If they don't allow a serious audit or review of how the money is used or where it's going, then it's just a game," he said.

In a recent statement announcing its civil enforcement action against Quiros and Stenger, the U.S. Securities and Exchange Commission accused them of perpetrating a "Ponzi-like" scheme by using new investment to pay old debts. Quiros and Stenger have denied the charges.

Reached last week, Hoffer said he stands by his 2012 remarks, but doesn't fault his fellow elected officials for their EB-5 advocacy.

"No, I certainly can appreciate that any and all politicians will grab at anything that looks like it might have a shot at creating jobs in the Northeast Kingdom," he said.

But Hoffer said it should have been clear sooner that it was inappropriate for the state to house both its EB-5 promotional efforts and oversight responsibilities under the same roof at the Agency of Commerce and Community Development. He noted that Burlington had acted decades earlier to establish the Community and Economic Development Office, which pursues the city's housing and business initiatives, while leaving regulation to planning and zoning boards.

"It's disappointing that no one asked the question: Is it appropriate for us to do both sides of the equation?" Hoffer said. "You can't really expect the people who are advocating for and assisting developers to be objective regulators. It's just not human nature."

The Shumlin administration eventually shifted EB-5 oversight responsibilities to the Department of Financial Regulation — but not until December 2014, a full six-and-a-half years after the alleged fraud began.

Rather than focus on the past, Hoffer said he hoped the scandal would prompt another look at the manner in which state government seeks to create jobs and alleviate poverty.

"I think many would agree that this is an opportune time to ask much bigger questions about our economic development efforts broadly," Hoffer said, particularly in rural areas such as the Northeast Kingdom. "For 50 or 60 years now since the 'War on Poverty,' federal and state monies have been directed to trying to improve conditions in these areas. I don't want to overstate it, but we haven't made a whole lot of progress."