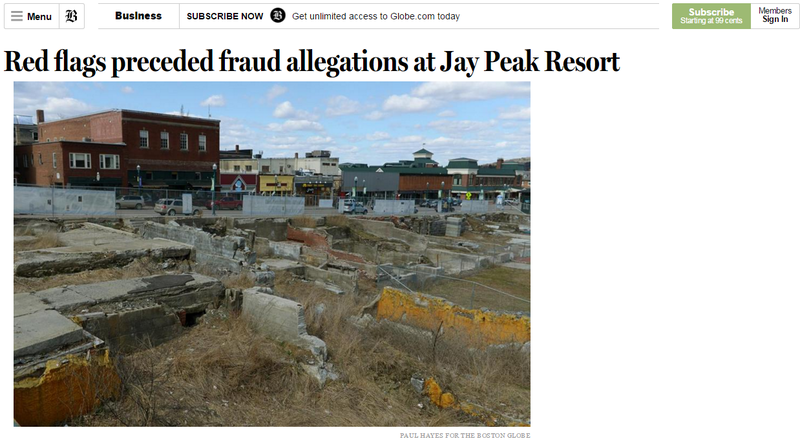 The news was stunning: Two of Vermont’s most prominent businessmen, Jay Peak Resort owner Ariel Quiros and president Bill Stenger, were accused last week of securities fraud and misuse of more than $200 million raised from investors since 2008.

But red flags had been waving for years over their use of a controversial federal program that grants US residency to foreigners in exchange for job-creating investments.

Some of the warnings dated to 2012, when an immigration attorney involved in Jay Peak’s securities deals publicly severed his relationship with the developers, implying their financial disclosures were misleading.

Construction delays mounted, and a crucial real estate deal was canceled for lack of payment. Investors complained that Quiros and Stenger had changed the terms of their payouts.

But state officials overseeing the visas-for-investment program largely allowed the Jay Peak executives to proceed — a testament to the developers’ promise of much-needed spending in Vermont’s most economically challenged counties and the strong political support from two governors and Vermont’s congressional delegation.

“You had a sense something wasn’t right here, just on the questions we weren’t getting answered,” said the state’s commerce secretary, Patricia Moulton, whose agency runs Vermont’s immigrant investor program. She eventually became suspicious of Jay Peak.

Quiros and Stenger’s designs were as audacious as the fraud they are accused of committing. In 2012, the duo unveiled a half-billion-dollar plan for Vermont’s Northeast Kingdom. It would sweep from the Jay Peak ski resort, near the Canadian border, to the newly acquired and renamed Q Burke Mountain.

Q Resorts, Jay Peak’s parent company, wholly owned by Quiros, even took over management of the Newport State Airport in a flurry of promises that saw the facility renamed Northeast Kingdom International Airport.

But only expansion of the ski resorts came to pass. At the airport, international flights have yet to land or take off.

Development money was to come from the federal EB-5 visa program. EB-5 offers permanent residency to foreign investors and their family members if at least 10 jobs’ worth of economic activity can be attributed to an investment of at least $500,000 in a qualified US business.

The investment offerings are exempt from the federal securities registration that’s common for stocks and bonds, but otherwise subject to federal and state securities laws.

Vermont’s EB-5 office has worked with about a dozen developers since 2006, but none more than Jay Peak. Quiros, who is based in Miami, and Stenger raised more than $350 million from over 700 investors in at least 74 countries, according to an April 12 lawsuit filed by the Securities and Exchange Commission.

Vermont runs its EB-5 program through an entity owned and operated by the state. It’s an unusual setup adopted by only one other state, Michigan. Hundreds of other regional centers, as the EB-5 offices are known, are for-profit outfits.

Even at a news conference to announce allegations of “massive” fraud leveled by the SEC and the state, Governor Peter Shumlin promoted the added assurance that state oversight affords.

Yet compliance with securities laws appears to have been an afterthought.

Moulton, the state commerce secretary, said that until Vermont financial regulators got involved in 2015, about a year after the SEC began investigating, the regional center conducted no systematic, independent, third-party reviews of projects’ business plans.

Moulton said this is a weakness in the whole EB-5 system, and one Vermont corrected after bringing in financial regulators. She said the commerce agency’s due diligence previously amounted to a review of applicants’ business plans and the reputations of their principals. With Jay Peak, Bill Stenger carried the case. The longtime president of the iconic ski area was a known entity in Vermont well before Quiros bought the operation in 2008.

And with Jay Peak, as with other projects, state officials mostly took the word of attorneys who had drafted the securities offerings, Moulton said.

The econometric forecasts on which job-creation projections were based — the heart of EB-5 — were taken at face value, even though they were paid for by developers. Market analyses also were trusted, but never verified beyond EB-5 approval by US Citizenship and Immigrant Services.

That federal green light remains the only required business plan review in the EB-5 process.

In 2012, Doug Hulme, an immigration attorney who had worked with Jay Peak, cut ties with the resort over alleged financial misrepresentations. Hulme issued a news release saying his company, Rapid USA Visas, “no longer has confidence in the accuracy of representations made by Jay Peak.”

But Hulme himself was the cause of consternation in the state EB-5 office, because Rapid USA at the time was improperly marketing itself as the state regional center, Moulton said. The state chalked it all up to “sour grapes,” Moulton said.

No financial audit of Jay Peak was performed.

Not every project got a pass, though. The regional center did rescind agreements with other developers and has declined to work with at least one group it was “not comfortable with,” Moulton said.

The state does not appear to have applied such scrutiny to Jay Peak until early 2014, when a group of investors began complaining that Quiros and Stenger had converted investor’s equity shares in the resort’s Tram Haus Lodge to unsecured IOUs — without their knowledge or consent.

Prior to this, Moulton said, more-rigorous inspection hadn’t seemed necessary because there hadn’t been any visible problems.

“Projects were getting built. Jobs were being created. Money was being spent. There was nobody screaming and hollering, no question marks, until the first conversion of Phase I investors from equity into debt.”

After a brief suspension by the regional center, the state allowed Jay Peak to continue selling its EB-5 securities, with conditions set by the Department of Financial Regulation. Responsibility for compliance for all of Vermont’s EB-5 projects was moved to Financial Regulation, which exercised its subpoena power to demand over 300,000 documents from Jay Peak. Its investigation is one the commerce agency had neither the resources nor the authority to conduct. The resulting charges against Quiros and Stenger largely mirror the federal charges by the SEC.

Shumlin, who is finishing his third two-year term, deflects questions about whether Vermont’s EB-5 center should have been reformed sooner. He cited its structure as a legacy of prior administrations. “We made the change when we made it, and we found what we found,” Shumlin said by e-mail.