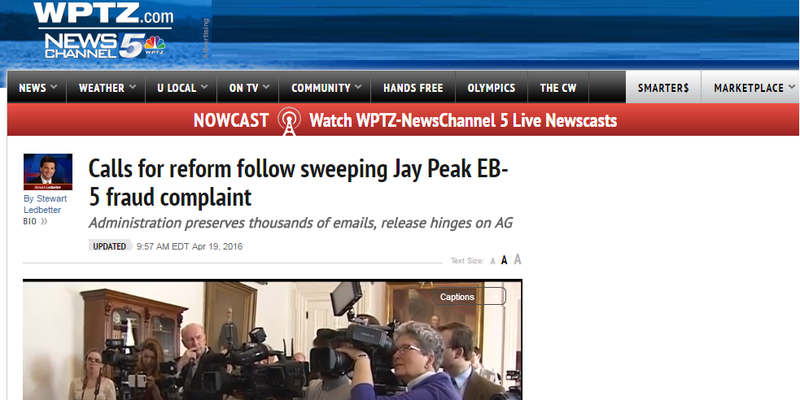 Both men over the years have contributed thousands of dollars to Shumlin campaigns and to the Vermont Democratic Party.

On Monday, Democratic gubernatorial candidate Peter Galbraith used a Watergate-era phrase in calling for the Legislature to move quickly to establish an independent commission.

Galbraith wants the chief justice of the state Supreme Court to appoint its members, who would investigate the role state officials played in promoting, and facilitating hundreds of millions of dollars worth of construction projects in Jay, Burke and Newport.

"There's good reason to suspect that the Stenger-Quiros projects received special treatment," Galbraith said at a Statehouse news conference. "In short, what did the governor know, when did he know it, and what did he do about it?"

Other candidates all demanded full transparency from the Shumlin administration. Democrat Matt Dunne called for the public release of all email between the developers and their companies and the Shumlin and Gov. Jim Douglas administrations.

Shumlin Chief of Staff Darren Springer said the attorney general's office had put a "litigation hold" on thousands of emails, and their release would depend on prosecutors.

The EB-5 program offered the state an opportunity to funnel foreign capital to an economically disadvantaged region of Vermont. Shumlin, and Douglas, were enthusiastic supporters of the new development which promised to bring hundreds of well-paying jobs to the Northeast Kingdom.

Several major upgrades have been completed at Jay and Q Burke, but federal authorities say at least $60 million in investor funds is missing. Shumlin said last week that Newport is unlikely to see its long-awaited new biotechnology facility or new commercial hotel come to downtown.

"We all feel betrayed," Shumlin said. "It's a dark day for Vermont."

But he said his administration's Department of Financial Regulation had worked doggedly to unravel the fraud scheme for more than a year, evidence of independence despite the contributions each developer had made to his re-election campaigns.

So far, neither developer is facing criminal charges, though prosecutors say that could change. Neither defendant has spoken publicly since the court filing last week.