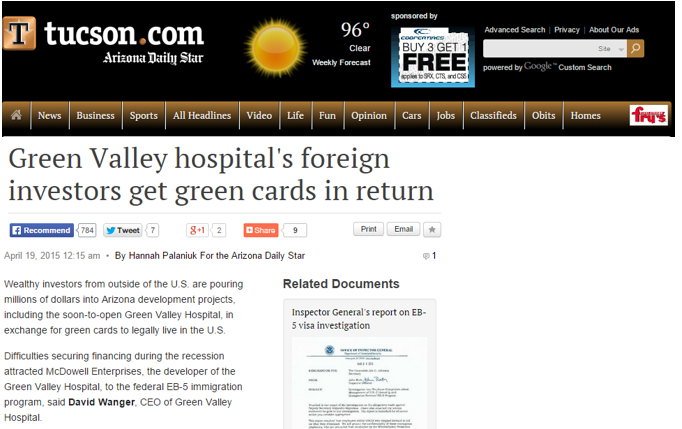 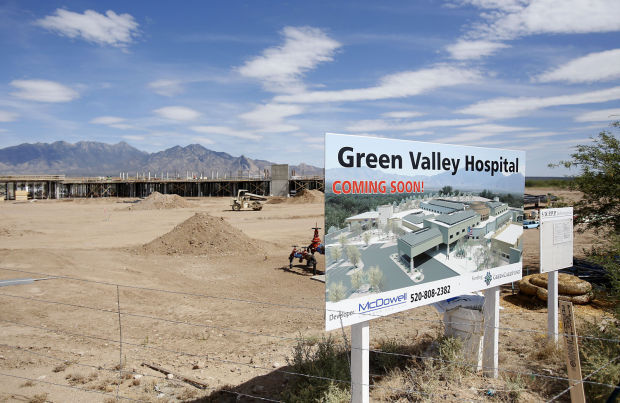 While the concrete is being poured there are about 75 workers on site. When interior work starts there will be more than 200 workers on site daily, according to David Wanger, CEO of Green Valley Hospital.

Wealthy investors from outside of the U.S. are pouring millions of dollars into Arizona development projects, including the soon-to-open Green Valley Hospital, in exchange for green cards to legally live in the U.S.

The hospital, which is to open on June 1, secured $56 million of the $79 million in capital needed for the hospital project from foreign investors, most of them from China, Mexico and Vietnam, Wanger said.

Under the EB-5 program, foreigners who invest $500,000 or more in a U.S. project that creates at least 10 jobs can get green cards for themselves and their immediate family.

Congress started the program in 1990 with the intent to create jobs. It didn’t get much use until the recession hit and sent project developers looking for unconventional means of funding.

For the second year in a row, the program has reached its cap of 10,000 visa applications.

“EB-5 visas are obviously a godsend for rural infrastructure across the United States,” said Pima County Supervisor Ray Carroll, who helped in the work to bring a hospital to Green Valley. The program allows for community investment free of cumbersome government funding requirements or political whims, he said.

Scottsdale-based McDowell Enterprises chose to build a hospital in Green Valley because of the community’s need for easily accessible medical care, Wanger said. Until it opens, Green Valley residents must drive nearly 40 minutes to Tucson for emergency medical services.

A 2010 survey of community needs conducted by the Green Valley Community Council found the lack of a hospital was the No. 1 issue for residents.

Other projects built with EB-5 funding include the Odyssey Preparatory Academy, which opened in Casa Grande in 2013, and the 19-story Luhrs Marriott, which is under construction in downtown Phoenix.

The EB-5 program was recently criticized by the inspector general of the Department of Homeland Security over cases of investment fraud and lack of federal oversight. Last month, department Deputy Secretary Alejandro Mayorkas was found to have “created an appearance of favoritism and special access” in dealing with EB-5 visa applications for certain projects, the inspector general’s report said.

The EB-5 program is up for reauthorization at the end of this year.

The for-profit hospital will have 50 general acute-care beds and a 12-bed emergency room. It will serve about 50,000 people in and around Green Valley, which is home to many retirees, and the rapidly growing Sahuarita area.

Tucson Medical Center in 2012 had entered into a “memo of understanding” to develop and operate a Green Valley hospital with McDowell, but pulled out of the project in 2013. It is now privately funded by investors.