EB-5 investors rush in ahead of looming rules change 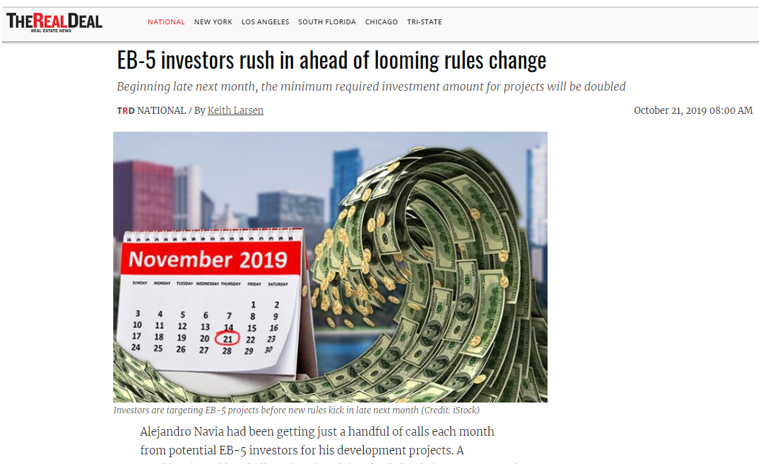 Alejandro Navia had been getting just a handful of calls each month from potential EB-5 investors for his development projects. A combination of fraud allegations involving the federal visa program and a backlog of green card applications have contributed to its waning popularity.

But in the past two months, things have changed. Navia has received calls from 30 investors looking to tap the EB-5 program at two of his hotel sites, one in Arizona and another southeast of Orlando, Florida.

“I am having to turn away investors,” said Navia, head of investment sales at Coral Gables, Florida-based Driftwood Acquisitions & Development. The firm focuses on hotel construction and acquisition across the country.

EB-5 has gotten a jolt of life, but experts say the program could soon flatline.

New federal regulations will nearly double the minimum dollar amount that all foreign visa-seekers must plow into  development projects. Because the rules take effect Nov. 21, investors have been rushing to get in at the existing minimum, according to developers, attorneys and regional center directors who handle much of the EB-5 transactions.

Investment requirements will rise to $900,000 from the existing $500,000 for a project in a low employment zone — known as a targeted employment area. They will also climb to $1.8 million from the existing $1 million in all other areas. The new rules also prohibit developers from what had become a common practice of tacking a sliver of a targeted employment area to a project that is in a wealthier area in order to qualify for the lower amount. The higher minimums are adjusted for inflation, the first time they have been raised in the program’s 30-year history.

Industry pros say the new rules will make it more difficult for developers to secure financing for projects, a reality that has prompted some developers to go dialing for dollars themselves before the deadline.

Navia acknowledged the rule change could complicate his ability to secure EB-5 investment for Driftwood’s planned 400-key Westin hotel in Cocoa Beach. The project had been in a targeted employment area under the existing rules, but will no longer be under the new regulations.

The increased requirement may also mean less business for regional centers, which serve as intermediaries.

“It’s kind of a panic mode,” said Michael Gibson of Miami-based USAdvisors, which works with EB-5 applicants to determine where to invest. “Two-thirds of the regional centers are going to be out of business after Nov. 21.”

Steve Yale-Loehr, an expert on the federal program, said that most of the existing EB-5 investments nationwide are at the $500,000 level. But after next month’s deadline, fewer than half of all EB-5 projects will be allowed at that threshold, said Yale-Loehr, a Cornell Law School professor who focuses on immigration. ‘Nail in the coffin’
Some see the latest rule changes as a sign the program — to which Congress has only issued short-term extensions — could be on its last legs.

“This is the latest sort of nail in the coffin,” said Scott Barnhart, who runs EB-5 regional centers in New York and in Florida. “The [visa] backlog is getting worse due to the pent up demand…If it wasn’t bad enough, then they institute a 100 percent increase on the investment amount and a severe restriction on targeted employment.”

The federal government created the EB-5 program in 1990 to spur investment in distressed and rural areas across the country by tapping foreign investors. But developers looking to build in more affluent neighborhoods soon found a loophole, enabling them to take advantage of the lower investment threshold.

Developers in Miami Beach, for example, combined multiple census tracts to connect sites with high-unemployment areas. And in New York City, the Empire State Development Corporation used the method to fashion Hudson Yards in Midtown to West Harlem — which qualified for the targeted employment area — via a thin strip running along the Hudson River on the Far West Side.

EB-5 investment grew from $300 million in 2008 to $5.7 billion a decade later, according to U.S. Citizenship and Immigration Services.

But Chinese investment has slowed down in recent years as demand for visas outstripped supply. As a result, the average wait time for Chinese investors for a visa ballooned to 16 years. In 2018, the number of visas the U.S. government issued to Chinese mainlanders dropped by nearly 3,000 from the year before.

And with Chinese demand decreasing, interest from Latin American EB-5 investors is rising.

In the 2018 fiscal year, the Department of State issued visas to 730 South American investors — led by those from Brazil — just under 8 percent of the total EB-5 visas issued. That was up from 449 in 2017.

“Latin American capital is going to be the biggest part of the pie going forward,” said Julian Montero, also of Saul Ewing Arnstein & Lehr. Those investors want a higher return in addition to the green card. Much of that capital, he added, will be funneled to projects in South Florida.

Once the new rules take effect, Gibson said the program will shift more toward funding smaller projects such as restaurants or businesses, rather than costlier real estate developments.

“The days of the Hudson and Atlantic Yards are done,” Gibson. Atlantic Yards, now called Pacific Park, is another massive development project in New York City that used EB-5 funding.

Fraud and abuse
While scores of EB-5 projects across the country have been completed, many have faced litigation and complaints, including a failed Ferris wheel project in Staten Island, a 60-story mixed-use complex in Chicago’s River North area, and a ski resort in Vermont.

In some cases, unscrupulous developers have siphoned money from projects for their own personal uses and investors never saw a return.

One example is the Palm House Hotel, a condo-hotel project from developer Robert Matthews. He assured roughly 90 investors that their $500,000 stakes would go to developing the last 5-star hotel in Palm Beach. Instead, Matthews used the money to pay off his personal debts, and buy a 151-foot yacht named “Alibi.” Those EB-5 investors are still without their money.

The interest rates on EB-5 loans are generally far lower than other forms of financing because investors are mainly concerned with getting a green card. Investors sometimes expect returns of just one-quarter percent. For that reason the program was once referred to as the “crack cocaine of real estate financing” for developers.

But with larger minimum requirements, investors will want bigger returns, industry experts say, along with some guarantee they will get paid back.

The new rules could make investors more inclined to take a preferred equity position — which pays a higher rate of return than a debt position — according to industry experts. With an equity position, investors will also have more recourse in case the project fails and will have an actual stake in the project.

“The model is going to change,” Gibson said. “Most EB-5 projects, the yield is significantly less than 1 percent. Nobody is going to invest in anything over $1 million and expect a 1 percent [return].”