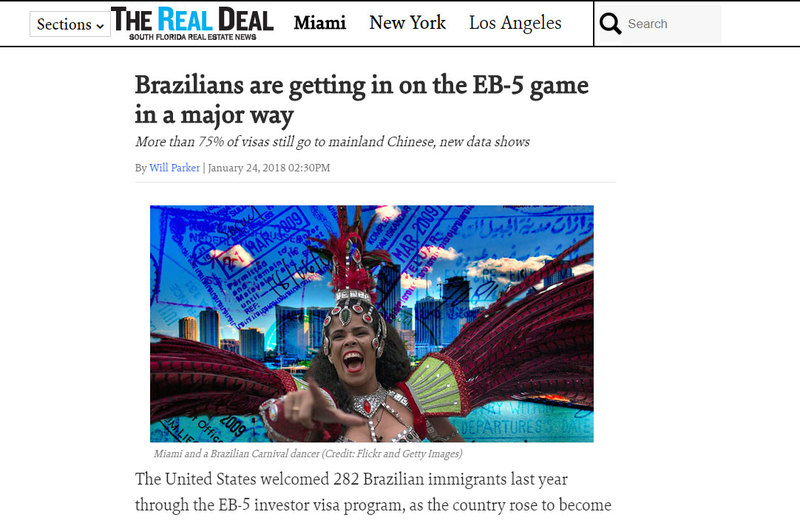 Miami and a Brazilian Carnival dancer

The United States welcomed 282 Brazilian immigrants last year through the EB-5 investor visa program, as the country rose to become the third largest user of EB-5 visas for the first time, a new report from the U.S. Department of State shows.

Brazil’s rise to number three for fiscal year 2017 came on an 88 percent increase in new visas issued year-over-year. In 2015, just 34 EB-5 visas were issued to Brazilians.

Mainland Chinese nationals still dominate the program, which has become a key source of financing for high-end residential projects in New York City in recent years. Seventy-five percent of EB-5 visas, or more than 7,500, were awarded to mainlanders in 2017. The country with the second most visas was Vietnam, with 471 visas issued. That country has held the number two spot for three years, according to analyses of historical data from Suzanne Lazicki, a Utah-based EB-5 business plan writer.

So where are the Brazilians investing? The government doesn’t provide project-level data but EB-5 experts say all the evidence points south.

“The geographic focus of Latin American investors really centers on South Florida,” said Julian Montero, an attorney at Saul Ewing Arnstein and Lehr in Miami. “Based on what we have seen… I would be shocked if it turns out that less than half of these Brazilians selected projects are not in Florida.”

“South Florida is probably the main focus for Brazilians,” said Abteen Vaziri, the director of Greystone’s EB-5 practice who has worked with Brazilian investor clients. “There’s been a lot of uncertainty in Brazil, especifically with inflation,” he said, which is driving more investment in the program.

It’s important to point out the issuance data mostly reflects applications that were made a year or more ago, and even Brazil’s new position at number three could soon be replaced by one of two countries that currently rank high on in the waitlist for new visas: Hong Kong and India. A November 2017 report from the state department showed that of the more than 30,000 investors in line for visas, 423 were from Hong Kong and another 307 were from India.

“I do believe that India will be the predominant market other than mainline China [eventually],” Montero said. Vaziri said Indian interest and applications were surging and pointed to the Trump administration’s tightening of H1-B worker visas as one reason why. “I was in Mumbai in October and there was a very big showing,” he said.

The U.S. government only issues about 10,000 new EB-5 visas per year. The program was temporarily extended this week until Feb. 8 as part of a part-term spending package that ended a brief government shutdown. Lawmakers have floated reforms to the program for years, but many of the current guidelines remain similar to what was first instituted by Congress more than 25 years ago. Currently, investors can obtain U.S. citizenship by investing $500,000 in so-called “targeted employment areas,” but that number is likely to rise with any reform measure that manages to pass through Congress.