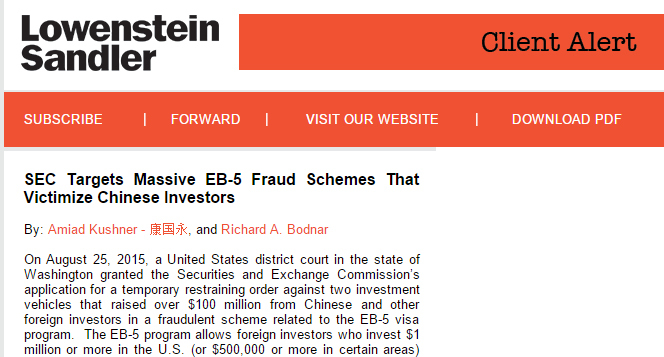 On August 25, 2015, a United States district court in the state of Washington granted the Securities and Exchange Commission’s application for a temporary restraining order against two investment vehicles that raised over $100 million from Chinese and other foreign investors in a fraudulent scheme related to the EB-5 visa program. The EB-5 program allows foreign investors who invest $1 million or more in the U.S. (or $500,000 or more in certain areas) and create 10 full-time jobs to receive a green card, effectively cutting away much of the red tape and bureaucratic hurdles that many other green-card seekers face. The temporary restraining order prevents the investment vehicles, Path America SnoCo LLC and Path America KingCo LLC, from conducting any further business or dissipating any funds that they control.

The alleged fraud involved solicitation for investment in two real estate projects: a skyscraper in Seattle and a mixed-use development in Everett, Washington. Prospective investors were promised that if they invested in the real estate projects, they would receive green cards through the EB-5 program. The investment funds and their officers allegedly misappropriated millions of dollars received from the investors, diverting those funds to unrelated real estate deals and personal purchases, including the purchase of officers’ residences and gambling expenditures.

In this case from Washington, since the investment funds were allegedly diverted, they did not result in bona fide “investments” in the U.S. and did not result in the job creation necessary for EB-5 status. Thus, the Chinese and other investors stand to lose their investments as well as the promised green cards.

The SEC has increasingly targeted EB-5 program fraud against Chinese and other investors. In June 2015, the SEC brought an action against an EB-5-related business that raised over $79 million, mostly from Chinese nationals, in an alleged fraudulent scheme. In July 2015, the SEC filed a lawsuit against Luca International Group, which raised $68 million in an alleged “Ponzi-like” scheme also targeting Chinese nationals.  In the Washington action, the SEC’s action prevented the defendants from raising even more EB-5-related funds. One of the defendants had recently filed documents showing an intention to raise an additional $95 million from foreign investors via the EB-5 program.

Some investors have fought back in private actions against the alleged frauds. In August 2015, a group of investors, including Chinese investors, filed a class action against Luca in the Superior Court of California alleging fraud, breach of contract, and breach of fiduciary duties, among other claims.

EB-5 fraud can be difficult to detect, especially for a Chinese investor who is not familiar with U.S. securities regulation and financial markets. Extra vigilance, careful review of investment documents, and the use of trustworthy legal and financial advisors can assist Chinese investors in avoiding fraudulent schemes related to the EB-5 program.