If developer Steven Witkoff’s ambitions are realized, he will complete by 2020 a soaring 900-foot condominium tower that would be the latest addition to the “Billionaires’ Row” of ultraluxury skyscrapers on the southern edge of New York’s Central Park.

Aiding Mr. Witkoff and his partners: more than $200 million in low-cost financing from aspiring immigrants, in increments of $500,000, through a provision of a federal visa program designed to help economically ailing neighborhoods. For the purposes of the program, known as EB-5, a special district was created linking the planned tower with public-housing projects in East Harlem—a common practice for developers.

The proposed $1.7 billion tower at 36 Central Park South is the highest-end project yet to tap the EB-5 program, which gives green cards to immigrants who invest in new businesses measured to have created jobs.

Should the project be built—a final decision to start construction hasn’t yet been made—prices are expected to be as high as $13,000 a square foot, just shy of the city’s record price a square foot, according to a presentation for potential investors. Some of the planned condo units may “include dedicated security offices to accommodate private security personnel,” according to offering documents.

Mr. Witkoff said he is following all program rules, and the project would create construction jobs throughout the city and region—not just around the development.

“Those are working-class people who are getting those jobs,” he said, adding the EB-5 program has helped start construction on numerous other projects that wouldn’t have been built. “EB-5 has been a huge positive for the financing market.”

The planned tower, on the site of the Park Lane Hotel, represents one of the starkest examples of what critics call a widespread abuse of the immigrant investor program that is at the heart of a debate in Congress. A crucial piece of the program expires Dec. 11, having been extended from Sept. 30. 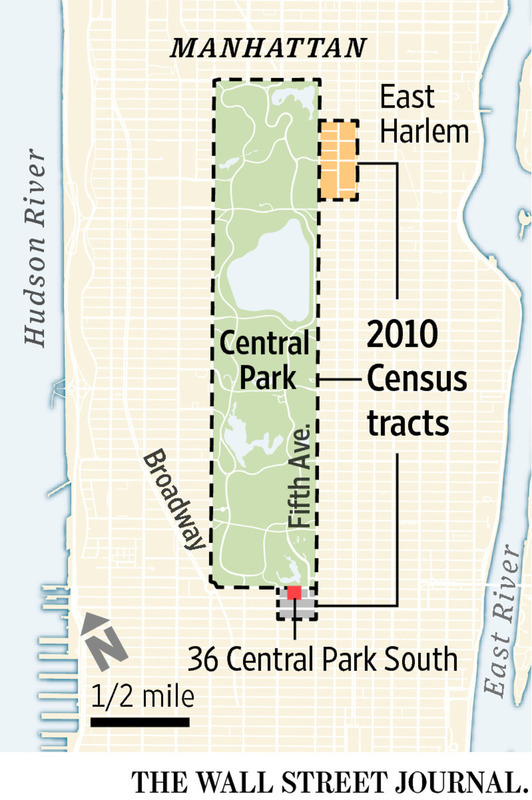 After months of discussions, key members of Congress in recent weeks have reached broad agreement on how to reform many aspects of EB-5, including making changes meant to reduce the possibility of fraud. But the main sticking point is a fight over whether projects like 36 Central Park South, in wealthy neighborhoods of big cities, should be able to continue benefiting from a provision meant for economically strained areas, congressional aides said.

“Much of the investment money coming into targeted employment areas has been directed towards lavish building projects in well-to-do urban areas,” Sen. Charles Grassley (R., Iowa), said in Congress last week. He called this an “abuse of the program” that is “not fulfilling the intent of the law.”

The urban projects, which account for the bulk of the money coming into the program, benefit from a provision that requires the businesses to be located either in rural regions or areas with unemployment rates at least 150% of the national average. That allows the developers to raise money at the level of $500,000 per investor, a far easier threshold than the $1 million required outside such areas.

Federal rules don’t specify the size of the targeted employment areas. In turn, developers and state officials have created districts that link luxury developments with low-income neighborhoods, a practice critics refer to as gerrymandering.

In the case of 36 Central Park South, that meant state officials drew a map that went from a census tract that includes the Plaza Hotel, through Central Park to a tract in East Harlem with numerous public-housing projects, according to documents received through New York’s Freedom of Information Law.

Major developers such as the Related Cos. and industry groups including the Real Estate Roundtable are trying to counter the criticism.

Leading this fight in Congress has been Sen. Charles Schumer (D., N.Y.), congressional aides say. He is pushing to keep the rules for urban developments intact, which effectively allow most of the country to qualify as a targeted employment area. Development projects create jobs all over a metropolitan area, developers say, and limiting a targeted employment area to just a handful of census tracts doesn’t account for that.

“The EB-5 program energizes our economy and creates jobs,” Mr. Schumer said in a statement. “Whether it is a small town or a big city, good projects—wherever they are—should rise to the top based on how many jobs they’ll create and how they’ll benefit our larger economy.”

But Mr. Grassley and his allies, including Sen. Patrick Leahy (D., Vt.), believe the current rules mean urban real-estate projects crowd out other projects. Rural manufacturers and others in poor areas are having difficulty finding immigrant investors in the face of the flashier projects, they say.

“It’s impossible to compete with those huge projects,” said Shae Armstrong, a director of the More American Jobs Alliance, a group lobbying in Congress against the large developers.

Builders reap enormous savings by using the program. Developers frequently save five to eight percentage points a year on a loan, often adding up to tens of millions of dollars, according to those who have used EB-5.

That highlights another issue, critics say. While financing was in short supply a few years ago, many developments using EB-5 today could have been financed by traditional sources, meaning the jobs would have been created anyway.

Just to the west of Mr. Witkoff’s project, at 111 West 57th Street, a development group this summer secured $725 million in debt from American International Group Inc. and Apollo Global Management LLC for a tower that would rise higher than the Empire State Building.

“We had more interest than we expected” from lenders, said Michael Stern, the project’s developer. “We had no less than four legitimate offers.”