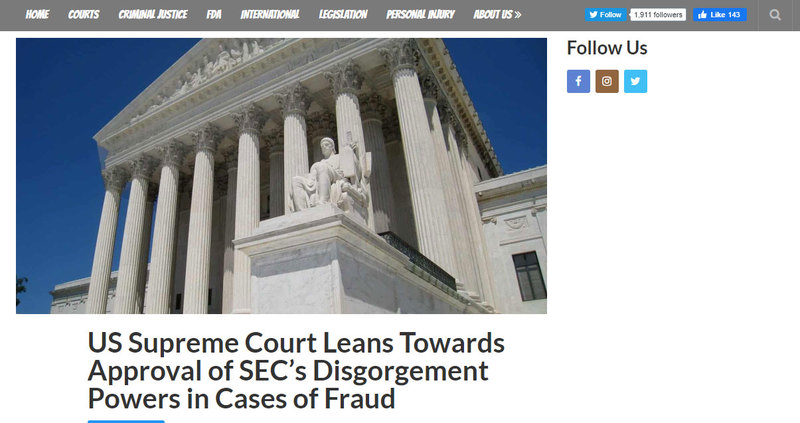 The Security and Exchange Commission’s powers to help combat fraudulent companies and reimburse their victims might get a huge boost if the US Supreme Court rules in favor of the agency’s broad powers of “disgorgement” which allows it to reclaim assets from the aforementioned firms. The case coming before the court involves interest circumstances and could have wide-reaching precedents if the SEC’s powers are ruled appropriate.

The couple promised investors EB-5 visas which the US government grants to wealthy investors who invest at least $USD 500,000 in a project that creates jobs and opportunities, such as the proposed cancer treatment center. Rather than build this center, the two transferred the money into their personal accounts. It goes without saying that the investors involved did not receive their promised visas.

Though the alleged fraud in this case is of a smaller amount, eliminating the agency’s powers to reimburse victims of fraud entirely is one step too far. Even so, it is looking like the court could impose some limits or restrictions on these powers which would taper them back from the somewhat unlimited position they enjoy now.

The Trump administration is supporting the SEC’s powers, writing, “Most obviously, forbidding courts to order disgorgement in SEC suits would make it easier for wrongdoers to keep their ill-gotten gains, thereby reducing the deterrent effect of the current remedial scheme.”

Arguing that investors and the overall market would be hurt by the lack of this recourse for fraud, the administration is pushing for the court’s approval of what has become a somewhat established practice. Liu and Wang’s attorneys argued that this was a power that the SEC did not have by law. This argument did not merit favor with the court who couched the disgorgement powers in terms of imposing equity and ensuring “fairness” in judicial proceedings involving fraudulent schemes and their victims.

Towards that end, Justice Ruth Bader Ginsburg argued, “Is it not an equitable principle that no one should be allowed to profit from his own wrong?”

Instead, the court focused on whether there should be some kind of limitation on this action in future cases and whether or not specific rules should be outlined to guide courts in the future.

“Would the government have any difficulty with a rule that the money should be returned to investors where feasible?” Justice Neil Gorsuch asked.

The last time he court visited a question involving the SEC’s powers of disgorgement was 2017 when the Supreme Court imposed a statute of limitations on the agency’s ability to collect to five years.