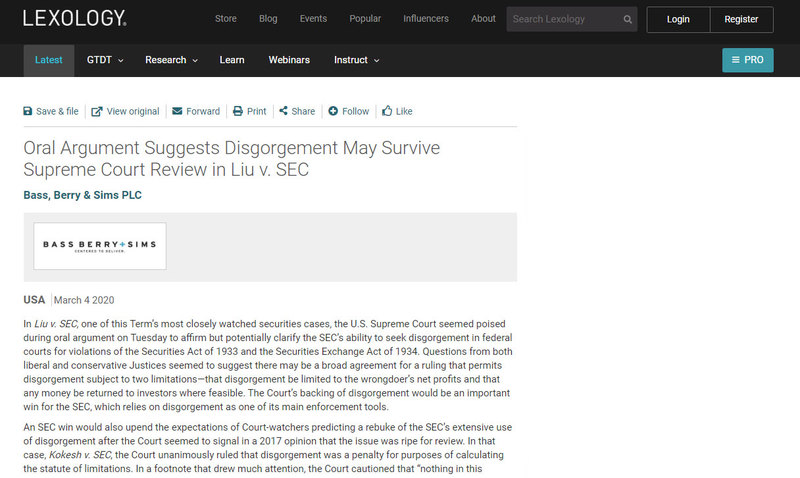 In Liu v. SEC, one of this Term’s most closely watched securities cases, the U.S. Supreme Court seemed poised during oral argument on Tuesday to affirm but potentially clarify the SEC’s ability to seek disgorgement in federal courts for violations of the Securities Act of 1933 and the Securities Exchange Act of 1934. Questions from both liberal and conservative Justices seemed to suggest there may be a broad agreement for a ruling that permits disgorgement subject to two limitations—that disgorgement be limited to the wrongdoer’s net profits and that any money be returned to investors where feasible. The Court’s backing of disgorgement would be an important win for the SEC, which relies on disgorgement as one of its main enforcement tools.

An SEC win would also upend the expectations of Court-watchers predicting a rebuke of the SEC’s extensive use of disgorgement after the Court seemed to signal in a 2017 opinion that the issue was ripe for review. In that case, Kokesh v. SEC, the Court unanimously ruled that disgorgement was a penalty for purposes of calculating the statute of limitations. In a footnote that drew much attention, the Court cautioned that “nothing in this opinion should be interpreted as an opinion on whether courts possess the authority to order disgorgement in SEC enforcement proceedings or on whether courts have properly applied disgorgement principles in this context.” Many, including defendant Charles Liu, saw this as an invitation to challenge disgorgement in SEC enforcement actions.

Liu was found to have violated the securities laws after using the EB-5 Immigrant Investor Program, which allows foreign citizens to obtain visas in exchange for investments that create U.S. jobs, to raise approximately $27 million from Chinese investors purportedly to build a cancer treatment center in California. Rather than build the treatment center, however, Liu diverted the money—paying himself and his wife $8.2 million in salaries and spending $12.9 million on marketing to solicit new investors—never even obtaining the required building permits. In finding that Liu had violated the securities laws, the district court ordered disgorgement of the entire amount raised from investors in addition to imposing civil penalties of $8.2 million. The Ninth Circuit affirmed.

Liu’s main argument before the Supreme Court focused on the language of Section 21 of the Exchange Act, under which courts assessing violations of the securities laws may impose injunctive relief, civil monetary penalties, and “any equitable relief that may be appropriate or necessary for the benefit of investors.” Citing Kokesh, Liu argued that disgorgement falls outside this authorization because it is punitive, not equitable.

At oral argument on Tuesday, the Justices quickly distinguished Kokesh, with Justice Ginsburg stating that disgorgement “can be punished in one context and it can be an equitable remedy in another context.” Justice Ginsburg then suggested disgorgement was an appropriate equitable remedy under Section 21, because “it’s an equitable principle, that no one should profit from his or her own wrong.”

Continuing along this line, other Justices probed how courts should properly apply disgorgement, not whether courts possess this power in the first instance. Justice Alito asked Liu whether it would not fall within a traditional form of equitable relief for a court to order disgorgement “limited to net profits and suppos[ing] every effort was made to return the money to the victims of the fraud.” Justice Kavanaugh pressed the SEC whether “it would be appropriate for this Court to say that’s the rule; namely, that it has to be returned to investors where feasible.” We “wouldn’t have a problem with that,” the government replied.

A ruling from the Court is expected by June 2020.