EB-5 In 2020: Managing The 'Stun Gun' That Just Hit The Investment Program 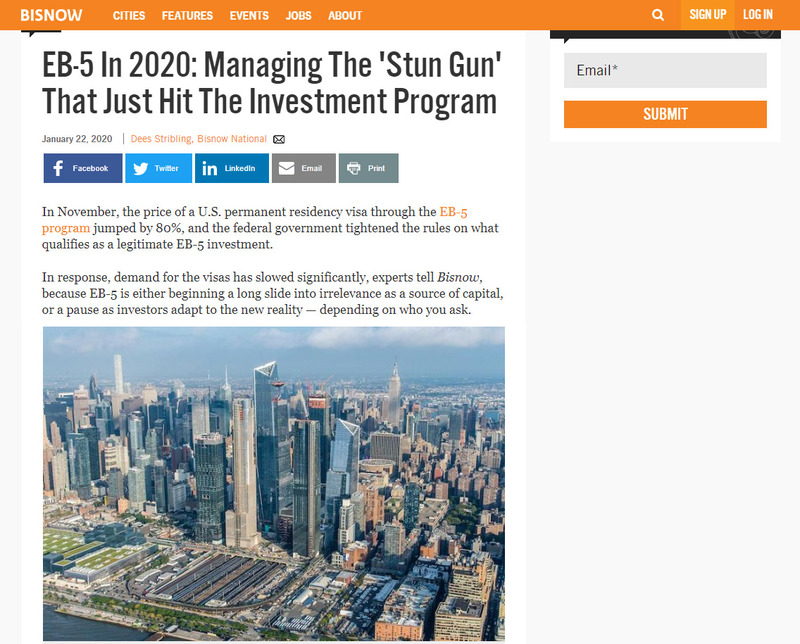 In November, the price of a U.S. permanent residency visa through the EB-5 program jumped by 80%, and the federal government tightened the rules on what qualifies as a legitimate EB-5 investment.

In response, demand for the visas has slowed significantly, experts tell Bisnow, because EB-5 is either beginning a long slide into irrelevance as a source of capital, or a pause as investors adapt to the new reality — depending on who you ask.

The new rules specify that investors must commit $900K in Targeted Employment Areas, up from $500K, or $1.8M for projects outside TEAs, up from $1M.

The new rules also make it much harder to invest in areas that aren't in need of economic stimulus, one of the chief criticisms of a program that was used to funnel $1.2B in low-interest investor loans to the $25B uber-luxury development Hudson Yards. "The program's been hit with a stun gun," said Debbie Klis, a shareholder and real estate attorney at Polsinelli.

"Many investors filed their petitions before then to take advantage of the lower investment amount, and those who didn't are now waiting." The new rules — and consequent drop in investment activity — are only the latest tumult for EB-5, which has had a bumpy run as it enters its 30th year as federal immigration policy.

In its early years, it was largely ignored. But during the recession, developers discovered it as a source of less-expensive capital, and Chinese investors in particular latched onto EB-5 as a (relatively) less onerous way to land highly prized green cards. Anyone with $500K could apply, and when their money was placed, they would have a chance to emigrate.

With popularity came criticism that EB-5 wasn't creating jobs as much as providing capital to investors who didn't need it. Application backlogs swelled. There were calls to abolish the program, and efforts to reform it in Congress that went nowhere.

Cases of fraud bubbled up and cast a pall over the program's reputation. The new regulations may have helped assuage concerns over misuse, but they are a shock to the cottage industry that has formed around the EB-5 program over three decades of the industry, Klis said.

Most of the projects that didn't make the November deadline will disappear altogether — the vast majority of EB-5 projects this cycle have been in TEAs — which are drawn by each state — because the deals relied on immigrants paying $500K, a Government Accountability Office study found.

Doubling the minimum investment to $1M, and restricting states from gerrymandering TEAs to include luxury developments, could seriously limit the available funds for the foreseeable future, she said. Complicating factors for the new U.S. regulations are those in other countries regarding the exporting of large sums of capital.

"Perhaps even more significant, investors will have more difficulty surmounting currency export controls when they are trying to move $900K or $1.8M than they did in moving $500K," Klasko Immigration Law Partners' H. Ronald Klasko wrote.

"In a country like China, where investors often needed to involve 10 or more friends or family in effectuating currency exports, one would need a calculator to determine the number of friends and family members who would be involved in a transfer of $1.8M." Courtesy of Withers Reaz Jafri, head of the immigration practice of international law firm Withers Fewer Investors, But Just As Much Money?

There is no public data yet on the impact of the new EB-5 regulations on visa applications, for which investors would use a form the government calls I-526. In January, U.S. Citizenship and Immigration Services released data on applications for permanent residence in the United States, including I-526s, for all of fiscal year 2019, which ended Sept. 30.

That was before the new EB-5 regulations came into force in November, but not before the new regulations governing the program were published in July, near the beginning of the fourth fiscal quarter. From October to December 2018, USCIS received a total 1,808 I-526 forms.

Over the next six months, the numbers dropped to 580 and 615, respectively, but from July to September 2019, the last quarter of the fiscal year, the number shot back up to 1,191. The impact of the new regulations will be significant, but not necessarily damaging, said Reaz Jafri, head of the immigration practice of the international law firm Withers. "Most of our clients are ultrahigh net worth individuals, so we are receiving inquiries," Jafri said.

"The number of deals might go down, but the dollar volume might be similar, with higher investments by each individual." "Fewer immigrants will be able to afford the higher minimum investment levels," said NYU Stern School of Business Scholar-in-Residence Gary Friedland. "But the increased minimum investment amounts will require fewer investors to raise the same amount of EB-5 capital."

For example, Friedland said, a project seeking $50M of EB-5 capital required 100 investors under the old rules, compared to 28 or 56 investors at $900K or $1.8M, respectively. The value of permanent residency in the United States is such that there will still be investors willing to pony up the higher levels, Friedland said, but investors' expectations about the investments themselves are likely to change.

"Based on normal supply-demand principles, the fewer investors are likely to demand a higher rate of return on their investment than the one-half of 1% rate accepted by many investors under the old rules," Friedland said.

The Wharf in Washington, D.C., viewed from the Washington Channel Cracking Down On TEA Gerrymandering Another change under the new regulations is just as contentious as raising the minimum amounts for EB-5 investments: taking the power to designate TEAs away from the states and giving it to the federal government, specifically the Department of Homeland Security.

"The recent EB-5 regulations address the most-publicized flaw of the program, which was TEA abuse," Friedland said. Under the old rules, capital primarily flowed to large real estate projects in affluent urban areas sponsored by major developers, Friedland said, with states putting together census tracts so the average employment rates were low, even though the EB-5-funded developments themselves were in well-to-do neighborhoods.

Aside from Hudson Yards, the $3B Wharf development in D.C. and developer Harry Macklowe's $1.5B luxury condominium conversion of One Wall Street each scored more than $100M in low-cost financing from immigrant investors, largely from China. Both were drawn into TEAs.

Under federal oversight, such gerrymandering is far less likely.

"EB-5 capital merely served to reduce the capital costs of the developer." Klis disagreed with that assessment. Without cobbling together census tracts, many deals would not have been done, she said.

"Projects in Manhattan, for instance, were made possible by cobbling together census tracts from Brooklyn and Queens as well," Klis said. "Jobs were created, though the workers might have to commute from other boroughs. What's the harm in that? Creating jobs is the goal of the program."

The Lingering Issues In the 2010s, EB-5 became known for cases of fraud and long waits for visas under EB-5, in extreme cases over 10 years. Critics of the new regulations say that they do nothing to deal with those issues. Fraud has been a persistent blight on the program.

In 2015, the Government Accountability Office warned that fraud risks in EB-5 were "constantly evolving." Two years before that, the Securities and Exchange Commission took emergency action against fraud in the program, including a $156M investment scheme orchestrated by a person who falsely claimed he was going to develop the "world's first zero carbon emission" hotel in Chicago.

Developers who planned to expand the Jay Peak ski resort in Vermont commingled EB-5 investor funds in what investigators said amounted to a $200M Ponzi scheme, which has been in litigation since 2016. More recently, a group of EB-5 middlemen in California were indicted last summer for swindling 200 Chinese EB-5 investors out of $110M.

EB-5 is barely regulated, and its rules are based on the original program, which did not contemplate the funding of sophisticated real estate projects, Friedland said.

The USCIS falls under the Department of Homeland Security and is ill-equipped to investigate the complex transactions. "Investors have no idea of the status of the fund and where or when the funds flow," Friedland said. "Neither does USCIS, until it's too late.

Account transparency and fund administration — which are aimed to deter, detect and recover the misappropriated funds — are vehemently opposed by industry and its congressional proponents." Now that the investment requirements are higher, investors will likely scrutinize the deals more closely than before, Mark Migdal & Hayden attorney Isaac Marcushamer said.

Even so, the new regulations do nothing about potential conflict of interest arising from attorneys representing both sides of the deal, and cultural differences mean that non-U.S. investors might not be aware of the problem, Marcushamer said. "In the U.S., a lawyer can't serve two masters," Marcushamer said.

"That concept isn't universal." As long as there is geopolitical instability, there will be demand for the EB-5 program, Marcushamer said, and so a spotlight needs to go on cases of fraud and mismanagement.

"If you have poor management, it's going to go poorly, and it isn't that hard to take advantage of investors," Marcushamer said. "Real estate deals can go catastrophically bad in an EB-5 context."

Florida EB-5 Investments President Marty Cummins felt so strongly about the new regulations that he has filed suit in federal court to overturn them. Cummins asserted that the new rules were written without the proper administrative steps taken, like sufficient background research or economic studies, and he said were designed to kill the EB-5 program.

Cummins admitted that he isn't sure how the lawsuit will play out, but he said he is hopeful. "If the law is followed, we will prevail, but we have no idea whether that will happen," he said.

Many EB-5 experts see Cummins' suit as a long shot, as the repeated efforts in Congress to reform the program have been. "Most observers don't believe there's going to be a rollback of the new investment levels, in court or otherwise," Jafri said. "The industry will adapt to them."