Can the S.E.C. Force Repayment of Ill-Gotten Gains? 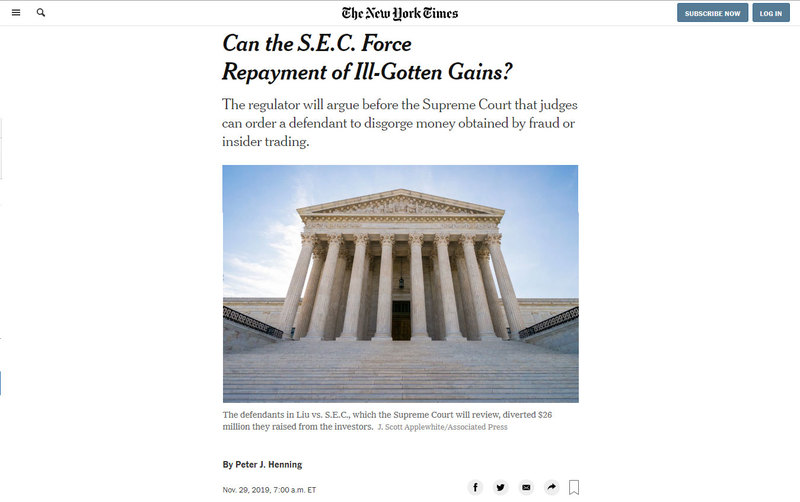 The defendants in Liu vs. S.E.C., which the Supreme Court will review, diverted $26 million they raised from the investors.

The regulator will argue before the Supreme Court that judges can order a defendant to disgorge money obtained by fraud or insider trading.

The Securities and Exchange Commission will be in front of the Supreme Court again to argue whether a federal court has the power to order a defendant to repay money obtained by fraud or insider trading.

The justices agreed to review the decision of the United States Court of Appeals for the Ninth Circuit in Liu v. S.E.C. In that case, a District Court found that Charles C. Liu and his wife, Lisa Wang, had defrauded 50 Chinese investors in an EB-5 Immigrant Investor Program. The couple were charged under Section 17(a)(2) of the Securities Act of 1933, which prohibits misstatements or omissions of material information when soliciting investments.

According to the S.E.C., the defendants diverted the $26 million they raised from the investors, who had been told that the money was going to build a cancer research center. The court ordered Mr. Lui and Ms. Wang to reimburse the investors and pay an $8.2 million civil penalty. The District Court prohibited Mr. Liu and Ms. Wang from participating in EB-5 programs in the future.

The issue before the Supreme Court will be whether a District Court can order a defendant to repay money obtained by fraud or trading on confidential information, or whether it is a penalty beyond the “equitable” power of the courts to require. The S.E.C. is sure to argue that a defendant who engages in fraud or insider trading should not be allowed to keep the profits, much as a thief has no claim to the money that is stolen.

In Kokesh v. S.E.C. in 2017, the Supreme Court held that disgorgement of profits from a fraudulent scheme was a penalty, and therefore subject to a five-year statute of limitations period for pursuing that remedy. But the justices stated in a footnote: “Nothing in this opinion should be interpreted as an opinion on whether courts possess authority to order disgorgement in S.E.C. enforcement proceedings or on whether courts have properly applied disgorgement principles in this context.”

That footnote signaled that District Courts may not have the authority to order disgorgement of profits under their equitable powers in deciding a fraud case under the securities laws. The Liu decision presents the justices with the issue of whether a lower court can order a defendant to repay money obtained by fraud or from trading on inside information.

Disgorgement has been a powerful weapon for the S.E.C. It has been the basis for the enforcement of the securities laws since 1971. The United States Court of Appeals for the Second Circuit held that year in S.E.C. v. Texas Gulf Sulphur: “The Supreme Court has upheld the power of the government without specific statutory authority to seek restitution, and has upheld the lower courts in granting restitution, as an ancillary remedy in the exercise of the courts’ general equity powers to afford complete relief.” Since then, lower courts have upheld the S.E.C.’s authority to seek repayment of profits obtained by fraud or through insider trading.

The question for the Supreme Court will be whether the Liu case is the best vehicle to cut back on the S.E.C.’s power to seek disgorgement of profits. The District Court found that the defendants had obtained funds through fraud, and the justices may not find it very appealing to allow them to keep the money.

But the S.E.C. has not yet obtained the misappropriated funds from the defendants and so has not yet created a plan to return the money to investors. That may be the key to the case. Returning money to defrauded investors is crucial to showing that the S.E.C. is not merely collecting money that will go to the United States Treasury but is restoring funds to investors.