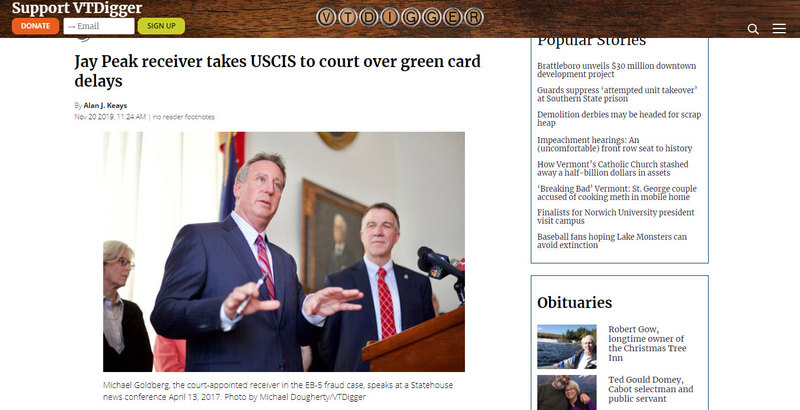 The court-appointed receiver overseeing Jay Peak and other properties at the center of an EB-5 investor fraud scandal is alleging the federal government is delaying the process for more than 70 of those investors to become permanent U.S. residents.

And he wants a judge to order the U.S. Citizenship and Immigration Services, which has left some of those investors waiting as long as five years and counting for a decision, to issue rulings within 90 days.

Michael Goldberg, the receiver, has filed a lawsuit against USCIS and other top-ranking federal officials, calling for the agency to act on the pending petitions of the dozens of investors in the Vermont EB-5 financed projects.

“USCIS has offered no reason for the delay, and has not indicated a time frame in which a response can be expected, and has only provided automated form responses to inquiries, all of which undermine confidence in its intent to adjudicate the petitions within a reasonable time absent court intervention,” the filing stated.

Goldberg filed his lawsuit against the USCIS in federal court in Miami, which is where some of the other civil lawsuits related to the EB-5 scandal have played out primarily due to Jay Peak’s former owner Ariel Quiros’ business ties to Florida.

More than 800 foreign investors from 74 countries each put up at least $500,000 in EB-5 projects proposed by the developers of Jay Peak and other initiatives in northern Vermont.

Those developers were Jay Peak’s owner at the time, Quiros, and Jay Peak’s former CEO and president, Bill Stenger.

Both Quiros and Stenger, as well as two of their associates, now face federal criminal charges of wire fraud and making false statements to the government related to a failed EB-5 financed project to build a biomedical research center in the Northeast Kingdom community of Newport.

Michael Pieciak, commissioner of the Vermont Department of Financial Regulation, said Wednesday that he supports the filing of the lawsuit by Goldberg.

Michael Pieciak, commissioner of the Department of Financial Regulation.

“Investors had no role in that, they had no knowledge of that, and they should not be harmed because of that,” Pieciak said, adding, “We certainly support the actions of the receiver trying to get USCIS is to make some determinations.”

The commissioner added that it’s time for USCIS to decide whether it’s going to approve the petitions based on the job creation numbers.

“It’s just not very easy to get a response from USCIS is one way or the other,” PIeciak said.

Several of the projects, including AnC Bio Vermont, and the Stateside condo development at Jay Peak, which didn’t get finished, failed to meet promised job creation targets, required by the USCIS when federal and state regulators put the brakes on the projects in April 2016 by bringing civil enforcement actions against Stenger and Quiros.

Since taking over as the court-appointed receiver, Goldberg made finishing the Stateside condos at Jay Peak a priority in an effort to meet the job targets and help dozens of investors in the project to obtain citizenship.

Stateside Townhouses at Jay Peak under construction in 2016.

With funds from a settlement, work on Stateside condo village project at Jay Peak, known as Phase VI, was completed.

Goldberg obtained the funds to do that after reaching an agreement with Raymond James & Associates Inc. to resolve claims that the financial services firm assisted Quiros in diverting investor funds. Raymond James, which admitted no wrongdoing as part of the settlement, agreed in April 2017 to pay the receivership $150 million.

About $20 million of the Raymond James settlement went to finish the Stateside project.

The U.S. Securities and Exchange Commission, as well as state regulators in separate civil legal action brought in 2016, accused Quiros and Stenger of misusing $200 million of the more than $400 million raised from investors through the federal EB-5 immigrant investor program meant to fund a series of projects, including massive upgrades at Jay Peak.

The developers started to run out of funding for the developments in 2014, and by the time the SEC filed its investor fraud lawsuit in April 2016, investors in three incomplete projects had not received “unconditioned” green cards.

Investors who have not received that status include those who put money into the Burke Mountain Hotel & Conference Center project, which opened in September 2016, as well as other investors in the Stateside project.

Also, most investors in a failed project headed by the two developers to build the proposed $110 million AnC Bio Vermont facility in Newport were unable to get their green cards for their investments in that project.

Many of investors in that AnC Bio Vermont project have been offered the option of a refund of their $500,000 investment, or have agreed to have that money “redeployed” into a different EB-5 project as a way to obtain their green cards.

Goldberg’s filing stated that over 2017 adjudications of the petitions by USCIS for the investors “slowed to a trickle or stopped completely.”

Then, the filing stated, in July 2018, USCIS filed a notice of termination for the Vermont EB-5 Regional Center, the state-run entity overseeing the EB-program in Vermont.

In taking that action against the regional center, USCIS cited the “lax oversight” of the state-run regional center that “allowed the fraud to occur in the first place.”

The state has since contested that determination, seeking the ability to “wind down” the operations of the regional center to allow those investors in EB-5 projects in Vermont to continue to move forward in seeking permanent U.S. residency.

Though USCIS has reiterated its decision to close the center in September, the state is still taking steps to keep it operating without taking on new projects.

That situation, according to Goldberg’s filing, is “lending further uncertainty to Plaintiffs’ immigration journeys.”

As part of the lawsuit, Goldberg is calling on the federal judge to issue rulings on the investors’ petitions within 90 days.

USCIS, according to the lawsuit, is expected within 90 days to decide on such petitions.

However, the filing stated, that is not what’s happening. Many of the investors cited in the legal filing have had petitions pending before USCIS since 2014 and 2015.

“Defendants’ failure to follow this regulatory requirement,” the lawsuit stated, “and to delay adjudications, not just beyond 90 days but for many years, severely prejudices both the financial interests and the immigration interests of the plaintiffs.”

The hardship placed on those investors, Goldberg’s filing stated, include uncertainty about their future, making it difficult for them to make decisions about careers, family and other life choices.

In addition, according to Goldberg, it is creating a problem for him in deciding what to do with the properties he is overseeing, including Burke Mountain ski resort.

“If USCIS is ultimately going to deny the petitions, spending millions of dollars to protect the Plaintiffs’ immigration interests is futile and wasteful,” the filing stated.

He added in the lawsuit, “Absent the need to consider the (investors’) immigration goals, the Receiver would have elected to sell the Burke resort rather than engage in operation and improvements.”

The investors, according to the lawsuit, have made “multiple inquiries” to USCIS seeking updates on their petitions, “but have received only form responses from USCIS, with no meaningful or case specific information.”

A spokesperson at the USCIS office in Boston declined comment on the lawsuit. “It is USCIS practice not to comment on pending litigation,” the spokesperson wrote in an email Wednesday.

Goldberg did not return a message Wednesday seeking comment.