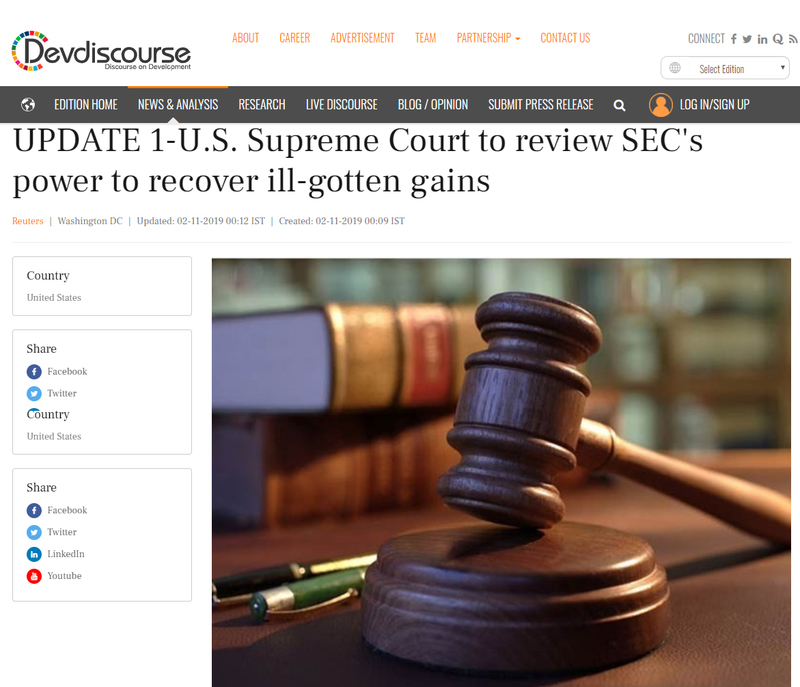 he U.S. Supreme Court on Friday agreed to hear a challenge to the ability of the Securities and Exchange Commission to recover ill-gotten profits obtained through misconduct in a case from California that could weaken the agency's enforcement power. The nine justices agreed to hear an appeal by California couple Charles Liu and Xin Wang contesting a 2016 civil action brought against them by the SEC. The SEC won a court ruling in 2017 requiring Liu and Wang to disgorge almost $27 million, the same amount they raised from foreign investors to build a never-completed cancer treatment center.

Part of the SEC's civil enforcement arsenal, disgorgement requires defendants to hand over to the U.S. government money obtained from a fraudulent scheme. The SEC has said it generally passes on disgorged funds to the original investors although it was not required to do so in this particular instance. In fiscal year 2018, the agency returned $794 million to harmed investors.

Liu and Wang had raised the money from 50 foreign investors who participated on the understanding that they would be able to obtain U.S. visas. Under the federal EB-5 visa program, wealthy foreigners can in effect buy U.S. immigration visas for themselves and families by investing at least $500,000 in certain development projects.

The program has sparked concerns about possible scams and led to various SEC probes. The Wall Street Journal in 2018 reported that one investigation concerned the real estate company run by Jared Kushner, President Donald Trump's son in law and senior adviser. Liu and Wang transferred millions of dollars to their personal accounts and the center was never built, the U.S. government said.

In October 2018, the San Francisco-based 9th U.S. Circuit Court of Appeals upheld the SEC's disgorgement finding. The Supreme Court in 2018 put limits on the ability of the SEC to seek disgorgement, ruling unanimously that it is subject to a five-year statute of limitations. In a 2013 case called Gabelli v. SEC, the Supreme Court unanimously ruled that civil monetary penalties are also subject to a five-year time bar.

In the most recent SEC case at the Supreme Court in March of this year, the justices ruled 6-2 in favor of the agency and refused to further narrow the scope of who can be held liable for securities fraud. The justices are expected to hear arguments in the case and issue a ruling by the end of June.