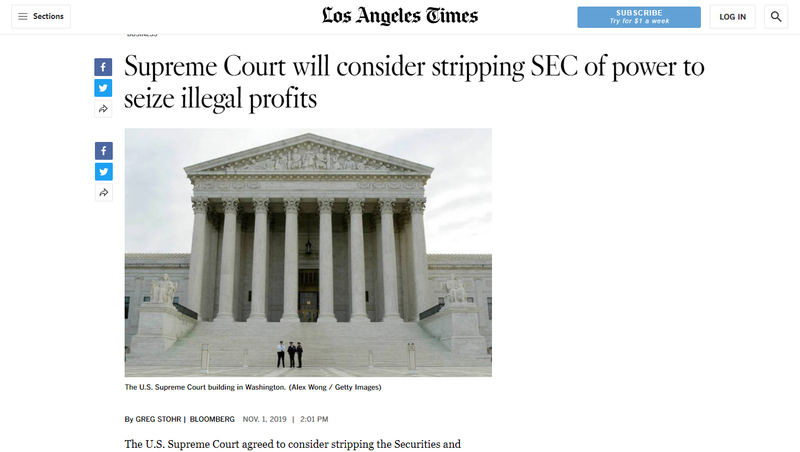 The U.S. Supreme Court agreed to consider stripping the Securities and Exchange Commission of its power to recoup illegal profits from wrongdoers, taking up a challenge to one of the agency’s most potent legal weapons.

The appeal by Charles Liu and Xin Wang contends that “disgorgement” isn’t one of the remedies Congress has authorized the SEC to seek against people who violate the nation’s securities fraud laws. The California couple is fighting a $27-million disgorgement order.

Liu and Wang were found to have defrauded people seeking to take advantage of the EB-5 visa program for foreigners who make large investments in the U.S. The two were accused of falsely telling investors the money would be used for a cancer treatment center. A federal judge ordered the couple to return $27 million they had collected.

In total, the SEC won disgorgement orders totaling $2.5 billion in fiscal 2018, compared with $1.4 billion in other types of penalties.

Disgorgement is designed to return ill-gotten gains to people who were harmed. Courts have traditionally viewed it as an “equitable” measure, which means judges make awards based on fairness rather than strict legal rules.

The 2002 Sarbanes-Oxley Act says judges hearing SEC enforcement actions can award “any equitable relief” they deem appropriate for the protection of investors.

But Liu and Wang’s attorneys say the SEC has sought so much money through disgorgement that it’s become a punitive measure, much like a penalty.

“The SEC collects huge sums of money by pursuing a penalty that it does not have the power to seek in federal court,” the appeal argued.

Liu and Wang point to a 2017 Supreme Court decision that said disgorgement is covered by a five-year statute of limitations that applies to penalties. That ruling explicitly declined to say whether the SEC has power to seek disgorgement in the first place.