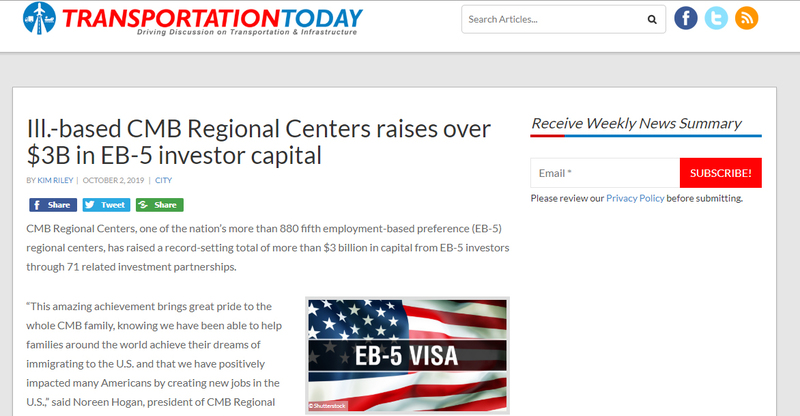 CMB Regional Centers, one of the nation’s more than 880 fifth employment-based preference (EB-5) regional centers, has raised a record-setting total of more than $3 billion in capital from EB-5 investors through 71 related investment partnerships.

“This amazing achievement brings great pride to the whole CMB family, knowing we have been able to help families around the world achieve their dreams of immigrating to the U.S. and that we have positively impacted many Americans by creating new jobs in the U.S.,” said Noreen Hogan, president of CMB Regional Centers based in Rock Island, Ill.

An EB-5 regional center is an economic unit, public or private, in the United States that is involved with promoting economic growth. The U.S. Department of Homeland Security’s (DHS) U.S. Citizenship and Immigration Services (USCIS) designates regional centers for participation in the EB-5 Immigrant Investor Program.

CMB Regional Centers operates 16 regional centers having scope within 22 states and Washington, D.C., and its EB-5 capital combined with more than $11 billion in matching capital for U.S. projects stands to create some 175,000 new American jobs.

“It’s incredible how the EB-5 program brings ambitious foreign nationals to permanently live and work in the U.S., creates new American jobs, and since EB-5 is a cost-neutral program this is all accomplished at no cost to the American people,” Hogan said.

Among numerous innovations in the EB-5 industry pioneered by CMB during its 22 years of operation include being the first regional center to use the loan model and the first to rely solely on indirect and induced job creation, according to company officials.

Additionally, CMB in 2014 was the first to commission an independent third-party accounting firm to audit all of the CMB partnership financials from their inception to the present, as well as their immigration statistics.

The result has been CMB’s assistance in over 5,500 families from more than 100 countries being able to legally immigrate and establish permanent residence in the United States.

“Take care of the client and we will both achieve success,” said CEO and CMB Regional Centers founder Patrick Hogan.

USCIS reforms to the EB-5 Immigrant Investor Program are set to take effect on Nov. 21 that will permit EB-5 petitioners participating in the Regional Center Program to meet statutory job creation requirements based on economic projections of either direct or indirect job creation, rather than only on jobs directly created by the new commercial enterprise, according to the USCIS final rule published this summer.

In addition, Congress authorized that priority be given to EB-5 petitions filed through the Regional Center Program, which allows foreign nationals to base their EB-5 petitions on investments in new commercial enterprises located within “regional centers.”