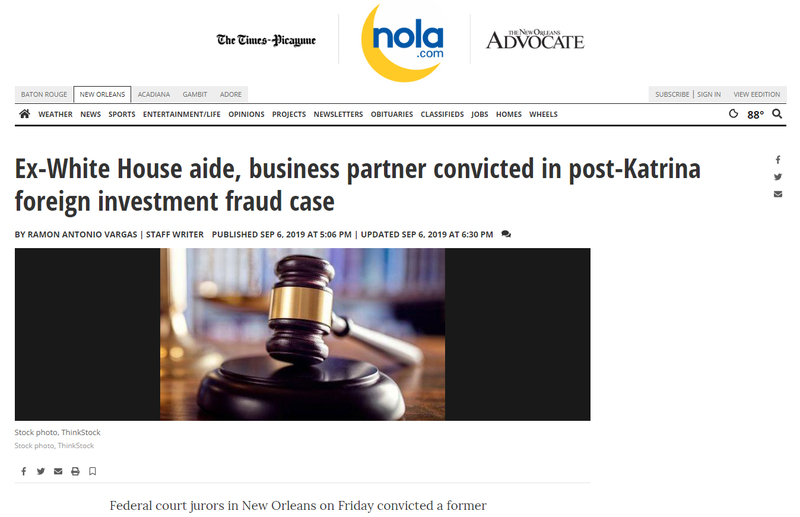 Federal court jurors in New Orleans on Friday convicted a former top military aide to three U.S. presidents and his business partner on charges that they scammed $15 million out of foreign nationals who believed they could become permanent American residents if they invested in the city’s post-Hurricane Katrina recovery.

Defense attorney Eddie Castaing said his side was "very disappointed with the verdict."

“It was unexpected, and we truly believed there was reasonable doubt on all of the counts, but the jury disagreed," Castaing said. “We will continue to fight, with post-trial motions and appeals.”

U.S. Attorney Peter Strasser's office said it hopes Friday's verdict drives home the message that "any attempt … to conduct fraudulent schemes (will) not be tolerated."

“In the end, it ultimately all comes down to greed," Strasser said. "This scheme to defraud our community, taxpayers and those lawfully seeking permanent residency in the United States occurred in the wake of one of the most turbulent times in our city’s history.”

Milbrath — who served as the White House Military Office’s chief of staff under Presidents Ronald Reagan, George H.W. Bush and Bill Clinton — and Hungerford solicited millions of dollars from 31 immigrant investors hoping to earn coveted "green cards" in return for their investments.

However, to secure permanent residency, the investors — who entered the U.S. on visas — had to prove that their money was creating jobs.

Prosecutors said the investors were unable to do that because Milbrath, 63, and Hungerford, 58, diverted the money to — among other things — their own company; PJ’s Coffee shops that were already running and profitable; and a proposed hotel in Algiers that remains a vacant lot.

The Maryland-based duo each pocketed $4.7 million that they spent on cars, a vacation home, country-club property and tuition for their children, prosecutors said. They said Milbrath spent $300,000 on vintage postcards.

Though they were granted temporary green cards, none of the investors became permanent U.S. residents.

Castaing and fellow defense attorney Jacob Weixler argued that Milbrath and Hungerford had made clear to the investors that the partners had the right to keep millions in management fees, tax distributions, deferred salary and outside the capital.

They also said the investors knew they ran the risks of losing their money and being rejected for permanent green cards.

“It’s not fraud for a business to fail … or not produce enough jobs,” Castaing told jurors.

In one of the trial’s most dramatic moments, Milbrath took the witness stand in U.S. District Judge Greg Guidry’s courtroom earlier this week and denied defrauding anyone.

He suggested that he and Hungerford were retaliated against because they argued that President Barack Obama’s U.S. Citizenship and Immigration Services director, Alejandro Mayorkas, was undermining the so-called EB-5 visa program that their company’s foreign investors were participating in.

“I lived by the creed I’ve always lived by, and that the military teaches you: that you do not lie, cheat or steal,” Milbrath said from the witness stand, according to WWL-TV, which first reported on the investigation that ensnared the ex-White House aide and Hungerford.

Assistant U.S. Attorneys Matthew Payne, Shirin Hakimzadeh, Maria Carboni and Andre Lagarde countered that the enormous fees the two men collected were not allowed under the EB-5 program. They contended that Milbrath and Hungerford lied to investors by convincing them all their money would go toward providing new jobs.

And, the government said, Milbrath and Hungerford also lied to federal officials and the administration of then-New Orleans Mayor Ray Nagin, who in 2006 gave the pair’s company — NobleOutReach — exclusive rights to link EB-5 program participants with local projects in which they could invest following the devastation of Katrina.

Affected investors came from countries such as China, Turkey, Jamaica, Iraq, Singapore, the United Arab Emirates and the United Kingdom.

Suzette Lopez of Jamaica testified that her $560,000 investment with Milbrath and Hungerford was for naught. Without permanent residency, she said, she must apply annually for a temporary reprieve from deportation and separation from her three American-born children.

Eight of the nine charges carry prison terms of up to 20 years; the remaining charge has a maximum punishment of five years. Milbrath and Hungerford are set to be sentenced Dec. 17.