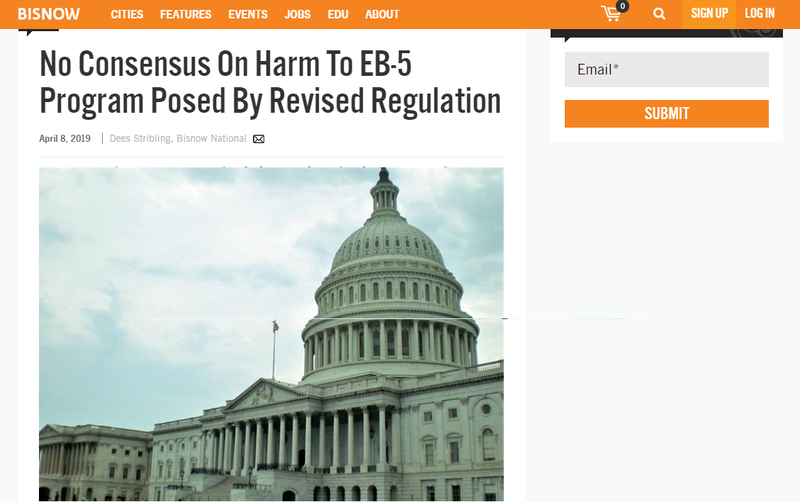 The U.S. Office of Management and Budget is on the verge of revising regulations governing the EB-5 visa program. The proposal would raise the minimum required investment and shift responsibility for designating areas as eligible for investment away from local entities into federal hands, and the real estate industry isn't certain what that will mean for the flow of investment capital under the program.

"EB-5 would go from being a program that attracts billions of dollars in foreign investment to a much smaller program with very little interest," US Immigration Fund President Nicholas Mastroianni III said. Others in real estate are concerned about the impact of the adjusted regulations on the program, but don't believe they will dampen enthusiasm among overseas investors who want green cards.

"To keep the program competitive and investments flowing into areas that need it, we have to ensure investment levels are adjusted, but within reason of what the foreign investment market can bear," EB5 Capital President and CEO Angelique Brunner said.

The revision, formally known as the EB-5 Immigrant Investor Program Modernization, was proposed in the waning days of the Obama administration by the U.S. Department of Homeland Security. A final version, based on a preliminary version that garnered nearly 850 comments, might come as soon as this month.

DHS said in the Federal Register that EB-5 regulations haven't been revised since they were published in the early 1990s, and that it intended to propose changes to parts of the EB-5 program that are in need of reform and to clarify certain policies. In the decade since the recession, EB-5, intended to spur the creation of U.S. jobs, has become a source of relatively inexpensive capital for commercial real estate, especially after the government determined in 2009 that creating construction jobs counts for the purposes of the visa.

Though intended for low-income areas, some high-profile real estate developments have used EB-5 funding in their capital stacks. Skyrise Miami, for example, obtained $258M in EB-5 financing in exchange for visas for roughly 500 investors and their families, and Los Angeles’s Century Plaza Hotel raised $450M in EB-5 capital. EB-5 Revision Worrying CRE, But In Different Ways At the heart of the revision is a significant increase to the minimum capital amounts needed to make an EB-5 investment.

"It's fair to say that all parties engaged in the business of EB-5 — developers, promoters, agents, attorneys and investors — know the current number is low and would, and likely should, increase," said Withers partner Reaz Jafri, who represents foreign investors, entrepreneurs and ultra high net worth individuals on immigration matters, with an expertise in EB-5.

The increase in the minimum investment amounts would represent an adjustment for inflation from 1990, DHS said. "The requirement has not been raised since the program’s inception in 1990, and it’s due for an increase," NES Financial Vice President and EB-5 specialist Coleen Danaher said. She also points out that when inflation is considered, the increases aren't nearly as steep in nominal terms.