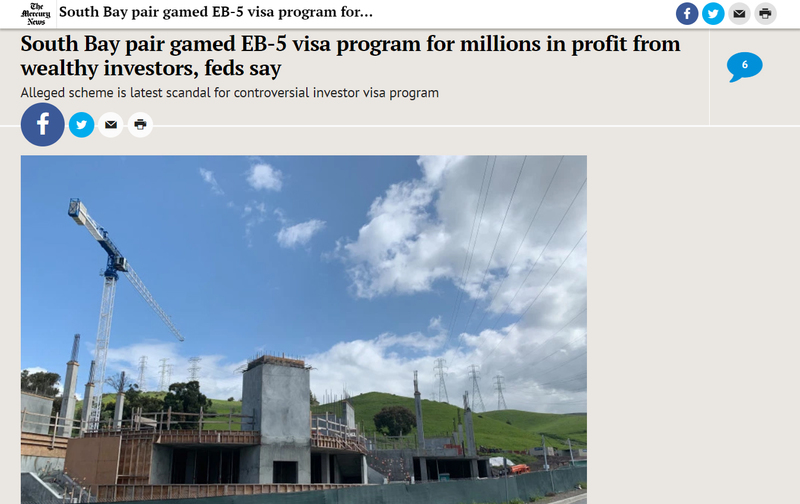 Construction is underway on the Mission Hills Square development in Fremont. The housing and retail project was one piece of a fraudulent scheme by two South Bay residents to profit off of an immigration program that provides a path to citizenship in exchange for investments in American companies, according to federal prosecutors.

It was an extensive plan to take advantage of a controversial immigration program, and federal authorities say that by the time they intervened, the scheme had ensnared hundreds of wealthy overseas clients seeking green cards and netted a South Bay attorney and her ex-husband millions of dollars in illegal fees and commissions.

Attorney Danhong “Jean” Chen and her firm’s office manager, Jianyun “Tony” Ye, face civil and criminal charges for allegedly seeking to profit from the immigration program, which allows foreigners to obtain visas in exchange for investing at least $500,000 in the United States, effectively sidestepping many of the obstacles that confront other, less well-heeled applicants for American visas.

Launched nearly three decades ago as a little-used economic incentive, the program, known as EB-5, was seized on by developers and state governments after the 2008 recession as a way to raise funds from overseas investors, particularly those in China. The U.S. government now issues thousands of EB-5 visas each year. Recipients of the visas and their families then can apply for permanent legal status.

As the popularity of the program has grown, however, it also has stirred controversy. A desire to overhaul EB-5 visas has emerged as a rare point of bipartisan agreement in the heated national debate over immigration, with Congressional Democrats and Republicans claiming that the program allows the wealthy to buy their way into the United States.

“A lot of people aren’t really interested in being investors — they are interested in a green card,” said Muzaffar Chishti, director of the New York office of the Migration Policy Institute, referring to those seeking the visas.

On its website, Chen’s firm advertises its expertise in the EB-5 program, which it calls “investment-based immigration.” Hundreds of investors seeking the visas were clients of Chen’s law firm, which had offices in San Jose, San Francisco and Beijing, according to federal prosecutors.

Exactly how much money Chen and Ye extracted in profit from the program is unclear. The Securities and Exchange Commission says that between 2008 and 2016, the pair made $12.7 million from illegal commissions they received for referring more than 400 clients to groups that bundle investments from foreigners seeking EB-5 visas. Federal authorities also allege that Chen and Ye illegally ran their own investment group, which funded housing developments in Fremont and Santa Rosa and collected millions of dollars in fees charged to overseas investors.

The U.S. attorney for the Northern District of California has filed criminal charges of fraud, identity theft and obstruction of justice against Chen and Ye.

The SEC also filed civil charges against Chen, Ye and two of their associates in a separate case, accusing them of securities fraud.

Ye has pleaded not guilty to the criminal charges and is fighting the SEC’s civil charges. He could face years in prison if convicted.

Martha Boersch, an attorney representing Ye in both cases, declined to discuss them in detail but said, “We dispute all the charges and we fully expect that Mr. Ye will be exonerated after trial.”

In a court filing in February, she noted that the government had not accused Ye or Chen of misappropriating money.

Meanwhile Chen is nowhere to be found, prosecutors say, adding that she fled the country late last year — around the time the SEC filed its charges, and she attained citizenship in the Caribbean island of Dominica under the name Maria Sofia Taylor.

Chen and Ye controlled their investment group, Golden State Regional Center LLC, through an Emeryville accountant named Kai Hao Robinson — a former employee of Chen’s law office who served as a “figurehead” owner, according to the SEC.

Federal authorities allege the center collected $52.5 million from 105 investors, the vast majority of whom were Chen’s legal clients, to fund two housing developments: an apartment complex with retail and restaurants just off Interstate 680 in Fremont, and a mix of townhouses and single-family homes under construction at the southern edge of Santa Rosa.

What those clients did not know, lawyers for the SEC wrote, was that “Chen and Ye had their hands in nearly every step of the investors’ EB-5 investment.”

In addition to running the Golden State Regional Center — which collected over $5 million in mandatory 10 percent administrative fees on top of each client’s $500,000 investment — the couple also owned the land where the Fremont project was being built, the SEC said.

No one involved in the Fremont or Santa Rosa developments responded to requests for comment from this news organization, nor did Chen’s law office or lawyers representing her or the accountant, Robinson. The SEC has filed two civil charges of securities fraud against Robinson; she has not been charged criminally. 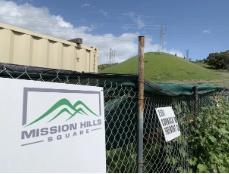 Whether the clients who worked with Chen and Ye ultimately gained visas is unclear. None of the clients is identified in court documents, and a spokesman for the U.S. attorney’s office for the Northern District of California did not respond to a question from this news organization about whether clients received visas.

On its website, Chen’s law office notes the “fast processing time” of EB-5 visas as one of the program’s benefits for participants. It also mentions the advantage legal status can give investors’ children in applying to American colleges.

The fast processing Chen advertised is relative to the overloaded immigration system — the State Department says it is only now processing EB-5 visa applications from September 2014 for applicants from China.

Still, to the program’s many critics, its benefits seem unfair.

“It is wrong to have a special pathway to citizenship for the wealthy while millions wait in line for visas,” U.S. Sen. Dianne Feinstein wrote in 2017, as she introduced legislation with Iowa Republican Chuck Grassley that sought to end the EB-5 program.

Chisthi of the Migration Policy Institute said many clients seeking the visas today care little about where their investment goes, so long as they secure legal status. That opens the door to potential abuse — while Chen and Ye’s alleged scheme flouted ethics and federal law, it may have amounted to an attractive “one-stop shop” for clients, Chisthi said.

Stephen Yale-Loehr, a professor of immigration law at Cornell University and a defender of the program who founded and formerly ran an EB-5 trade organization, noted that the United States issues 10,000 of the visas each year. Most go to investors’ family members, he said, but that still leaves thousands of investors who each pour at least $500,000 into American companies.

“You can do the math — that’s a lot of money that helps, or at least can help, stimulate the U.S. economy and create jobs for U.S. workers,” Yale-Loehr said. “But it is complex and it has to be done well.”

Proposals to overhaul EB-5 in recent years have included, along with scrapping the program entirely, raising the minimum investment and tightening rules to ensure more money goes to the rural and struggling urban areas the program originally was meant to help. The proposals have one thing in common: They have not become reality.

Congress has repeatedly reauthorized the EB-5 program, which this year is set to expire Sept. 30. But Yale-Loehr said major changes to the EB-5 program are likely to happen only as part of more comprehensive immigration reform, one of the most polarizing topics on Capitol Hill. So, he said, a familiar cycle repeats itself, and people continue to seek a path to the United States through $500,000 investments.

“As it approaches its expiration date, Congress talks about revamping the EB-5 program,” Yale-Loehr said. Then, “the political gridlock sets up and they can’t get an agreement on substantive changes, so they kick the can down the road.”