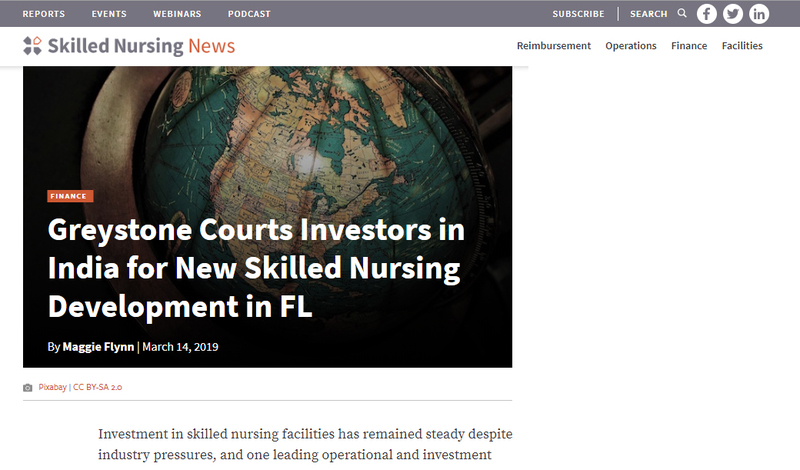 Investment in skilled nursing facilities has remained steady despite industry pressures, and one leading operational and investment firm has begun to look abroad for cash as it looks to expand.

Greystone & Co., Inc. is pitching potential investors in India on a 180-bed skilled nursing development in the Orlando area under the federal government’s EB-5 program.

With EB-5, foreign nationals can receive lawful permanent residency in the United States, along with a conditional visa, in return for a capital investment in commercial enterprises that lead to the creation or preservation of U.S. jobs. Each investment of $1 million — or if the project is in a targeted employment area (TEA), $500,000 — grants the investor and their immediate family the ability to take part in the visa application process and obtain a U.S. green card upon approval.

Greystone’s latest development in Florida would become part of a 28-facility network managed by Greystone Healthcare Management Corp., an affiliate of the New York-based lending and advisory company. The proposed $37.13 million facility, called the Health and Rehabilitation Center of Apopka, would be located in Orange County.

Tale of the tape

Investors in Greystone’s EB-5 project would receive a 2% annual return, according to a presentation from the company dated March 5. The company is targeting $3.5 million in EB-5 loans, or seven investors each investing $500,000. The company already has one investor in the project and thus needs to find six others, Allison Berman, head of Greystone’s EB-5 program, told MoneyControl.com.

The other funds would come from $3.93 million in developer equity and a senior loan of $29.7 million, according to Greystone.

The project would create 221 jobs, over a 24-month construction period, which would translate to about 31.6 jobs per investor. The U.S. Citizenship and Immigration Services (USCIS) requires the creation of 10 total jobs per investment, according to Greystone’s presentation.

India became the second-largest EB-5 investor market in fiscal 2017, at least in terms of the number of I-526 petitions filed, according to data from the trade association for EB-5 investment, Invest In the USA (IIUSA) that was cited by Greystone. In terms of visas awarded, however, India’s 200 in fiscal 2017 lags far behind clear leader mainland China, according to IIUSA data — good for sixth place behind Vietnam, Brazil, South Korea, and Taiwan.

The EB-5 program has long attracted interest among senior living developers, and since 2008 has brought $37.8 billion in investments from foreign nationals to the United States. But its existence has also attracted criticism due to high-profile fraud cases and questions over whether the initiative disproportionately encourages investment in cities over projects in lower-income and rural areas.

The program also suffered from an association with potential malfeasance in the Trump administration, with both the president and advisor — and son-in-law — Jared Kushner using EB-5 financing in the past, and advisor/daughter Ivanka Trump touting access to the president in a presentation to Chinese real estate investors. In response, Democratic leadership floated the idea of allowing the program to expire to eliminate the potential conflicts of interest surrounding the White House, though the efforts were ultimately unsuccessful.

Greystone noted in a press release announcing the investment offering for the Indian market that qualification for various visa programs is becoming increasingly difficult; the USCIS allocates 10,000 EB-5 visas per year. Still, the company positioned the opportunity as a viable way to gain U.S. residency — while also noting the fierce competition for the visas on a global scale.

“There is no question the U.S. government is making variations to its immigration policies, but the EB- 5 program remains unchanged today and is an ideal way to leverage an investment in the U.S. economy for a visa,” Berman said in the statement. “Adding to the equation that the popularity of the program means a backlog is in the future for Indian applicants, and potential changes on the horizon for the program overall, now is the time to explore this avenue for residency in the U.S.”