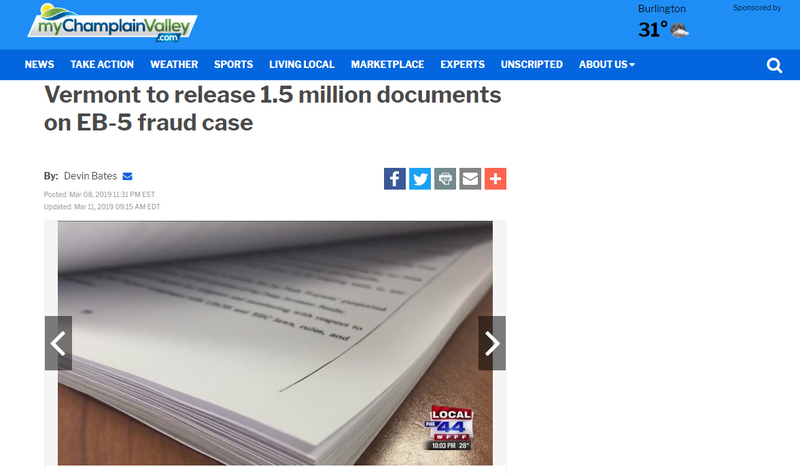 The State of Vermont has agreed to release 1.5 million pages of documents that could provide more information on years of EB-5 fraud at Jay Peak.

The records will be made public as the result of a settlement with the news website VTDigger, which sued to obtain the documents.

The site's founder, Anne Galloway, said their requests were denied because of what the state called "active litigation" regarding the EB-5 program. Galloway said that excuse was used as a "shield" to block public access.

"The records I got this afternoon could have been released a year ago without us going through the trouble of suing," Galloway said.

The EB-5 visa program encourages foreign companies to invest in the US in exchange for permanent residency in the US.

The allegations of fraud at Jay Peak first came to light under former Vermont Gov. Peter Shumlin. In April 2016, the Securities and Exchange Commission charged Jay Peak developers with 52 counts of fraud and the misuse of $200 million in foreign investor funds.

VTDigger began investigating Jay Peak's EB-5 program in 2014. But despite all that's become known about the scandal, Galloway said, the state's role is unclear, partly because it refused to reelase relevant documents.

"We're in a situation where the government is the fox watching the hen house," Galloway said. "There are a number of instances in which we have not been able to get access to public records that would help us better understand what was really going on."

In a press release, Gov. Phil Scott said he's pleased with the settlement.

"The EB-5 fraud represents a dark period for the Northeast Kingdom and given the clear public interest in this fraud, I remain committed to ensuring transparency to Vermonters by releasing relevant documents as early as legally possible," Scott said.

Mike Donoghue, a longtime journalist and executive director of the Vermont Press Association, said only time will tell if the state is serious about full transparency.

"Phil Scott has said he wants to be more transparent, and they've got 1.5 million documents that we're talking about, and about 800 thousand or more they're going to put on a website shortly," Donoghue said.

No date has been set for the release of the documents.